Brahms Variations on a Theme by Paganini, Op.35 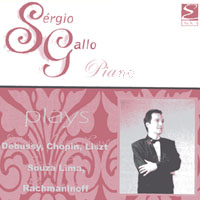 I must concede that this pair of piano discs took me much longer to review than many that have come my way. What does one write when the performances are totally competent but lack that extra spark that separates the merely good from transcendent excellence?

Sérgio Gallo is a professor in the music faculty of the University of North Dakota, and has received musical training in Paris, Budapest and Cincinnati. The biography in the booklet does not state that he comes from Brazil, but that is implicit given the title of the CD Alma Brasileira (The Soul of Brazil), which has all but 10 engaging minutes worth of Brazilian music. Unsurprisingly, the eponymous Alma Brasileira (which is also Choros No.5 from Heitor Villa-Lobos’s collection of “street music”) and Impressoes Seresteiras (Minstrel Impressions from Ciclo Brasileiro) are the most memorable performances in this recital. Only a Brazilian could play this music with such freeness and authority.

As to the rest of the recital, I am less impressed. The Chopin Third Sonata receives a rather literal reading that generates little sense of imagination or fantasy. This is more apparent in the opening movement that sounds prosaic and largely safe, and a finale that plods along steadily until the final flourish. Although the étude-like second movement is well brought-out and there is serenity and poetry in the slow third movement, the overall effect is less than the sum of its parts.

One wonders why an artist more suited to music of a more contemplative kind would build a programme around virtuosic warhorses.

Brahms’ Paganini Variations Op.35 are about the most notoriously difficult in the pianists’ repertory but merely mastering all the notes just isn’t enough. Where is the sense of freewheeling danger – the spectacle of a tightrope walker comes to mind – or an extravagant display that grabs the listener by the lapels? The glissandi of Variation No.13 in Book One lack a cheekiness à la Cherkassky (not the most fire-breathing of virtuosos, but one who certainly knows how to showboat), being bogged down by caution. The octave variation in Book Two sounds dutiful rather than outrageous. Just a few examples where such a demanding work deserves more than an efficient read through.

In Scriabin’s Fourth Sonata, one misses the perfumed sensuality in the first movement while the Prestissimo volando of the second movement does not soar. Like the Wright brothers’ inaugural flight, the finale takes off for a short but ecstatic few moments, and lacking the necessary lift and bouoyancy, just comes back to earth.

In the second volume, Debussy’s Le collines d’Anacapri (from Préludes Book 1) and L’isle joyeuse are short on mystique and sensuality, and what is Liszt’s coruscating Mephisto Waltz No.1 without the vitriolic bite and requisite diablerie? Only in Chopin’s Barcarolle is there genuine cantabile and lyricism, and that provided some eight minutes of unqualified enjoyment.

Having been rather negative in my assessment thus far, I can however report a very accomplished Rachmaninov Second Sonata from Gallo, easily the best performance of the big works in both discs. He plays the earlier and longer 1917 version of the Sonata, which could sound like impressive but empty rhetoric under the wrong hands. Fortunately, Gallo gets the music’s smouldering disquiet well under his skin and there is no shortage of passion in his reading. He also has both the chops and gall to barnstorm like the best of pianists, even if he does not approach the febrile intensity of Horowitz, the flashy exuberance of Zoltan Kocsis, or the sheer hell-for-leather disregard for decorum of Michael Ponti.

Tagged on is the Cançao Infantil of Joao de Souza Lima (1898-1982), a two-minute-long Brazilian children’s song where simplicity and Walt Disneyesque charm are its most winning qualities. Gallo sounds like he loves the work, and the listener should be easily swayed too. Could we not have had less of the bluster and more of this?