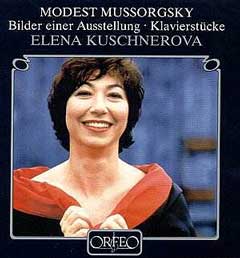 Elena Kuschnerova is a name that will be familiar to pianophiles. Born and raised in Moscow, she started lessons with her mother, a trained concert pianist, at the age of four. Subsequently she studied with Tatiana Kestner at the Moscow Central School of Music (the pedagogue also taught Andrei Gavrilov and Nikolai Petrov) and completed her training at the Tchaikovsky Conservatory.

This all-Mussorgsky disc was recorded by the Bavarian Radio in Munich and features, besides that rarely played masterpiece, Pictures at an Exhibition, 13 other short piano works by Mussorgsky.

A stream of grace pervades Kuschnerova’s playing, complementing her piano technique, which is well-nigh perfect. Her playing is powerful, and she is in possession of a good range of tonal colour when she wants to, but the dramatique evades her, as well as propulsion. Where other pianists have taken risks, Kuschnerova remains firmly in safe territory as far as tempi are concerned. The return of the Promenade theme is not well-differentiated enough; The Hut with Fowl’s Legs isn’t quite the dramatic, menacing affair other such as Richter and Horowitz have made it; the Great Gate concluding the cycle is shorn of finality and majesty by her releasing the final note earlier than I would have liked her to. Still there is much to like – The Market at Limoges is taken at a good speed and the bustle is clearly enunciated rather than the mess of notes some pianists make out of it. Bydlo is powerfully played, and there is much to enjoy elsewhere.

Altogether, this is a prosaic, rather than dramatic account of this much-loved work, but Kuschnerova’s technique is never in doubt. If in the end this can’t be recommended with the heap of great performances of “Pictures”, that will be because the great recordings are so special in their different ways that a new recording will have to be exceptional to be in their company.

Listeners interested in Mussorgsky will find much to enjoy in the rest of the disc – Souvenir d’enfance (Reminisces of Youth) No.3 is atmospherically played and a greater freedom than in the Pictures. Reverie is a broodingly nostalgic piece. The last piece, Porte-enseigne-Polka features Mussorgsky in a bucolic mood; festive and enjoying himself. 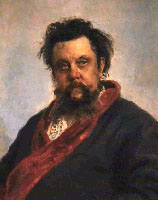 Mussorgsky was an accomplished pianist, if an alcoholic and an account describes how, even when inebriated, he was in full possession of his fingers – he could at the request of a singer having a bad day with her voice, transcribe his accompaniment up or down to suit it. His piano music here shows a natural sympathy for the piano idiom – it is hardly ever virtuosic but he always manages to evoke more with less notes (unlike for example, Rachmaninoff, who was never content with a simple melody and accompaniment). I think Ms Kuschnerova, uninhibited by other interpretations, has dared to put more of her own musical thoughts into these pieces, and the results are beautiful. Any of these could make a fine encore piece to a recital and all of them are worth listening to, especially when played as well as they are here. Recommended for the short works.

Homepage of Elena Kuschnerova : http://www.elenakuschnerova.com
You may listen to music as played by Kuschnerova, buy MP4s and find out much more about her here.

Tags: KushnerovaMussorgskyPictures at an Exhibition