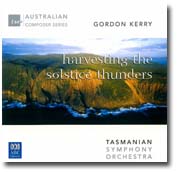 Gordon Kerry (b.1961) Nocturne for double chamber orchestrs Concerto for cello, strings and percussionBright Meniscus Heart’s-Clarion for trumpet and stringsharvesting the solace thunders

William Blake once commented that “You never know what is enough, until you know what is more than enough.” Most audiences, without a doubt, would admit they’ve had “more than enough” of modern composers and their wretched tuneless constructs. A fair enough sentiment, but as this new series devoted to the music of Australian composers shows, ABC Classics and the Tasmanian Symphony have not given up hope, and classical listeners might yet find something worthwhile and rewarding what composers from the Antipodes have to say.

This disc showcases the orchestral works of Gordon Kerry (picture), whose heart-on-sleeve writing is at the same time sensual and spiritual. David Porcelijn, who completed a notable Beethoven cycle in 2002 with the Tasmanian Symphony Orchestra, is a more than worthy advocate for such music, and one will find meticulous workmanship in these pieces, from both composer and performers. Take for instance, the opening work on the album, the classically-titled Nocturne, written for a pair of chamber-sized groups each comprising string octet and wind quartet, joined by a piano obbligato. Obviously, a CD cannot fully capture the horizontal stereophonic effects of the intricate musical dialogue possible from a live performance, yet one cannot fail to appreciate the quality of focus which the players bring to Kerry’s writing.

Or how about the Concerto for cello, strings and percussion, originally written for Norwegian cellist Truls Mrk, but performed here by TSO Principal Cello, Sue-Ellen Paulsen. She delivers a persuasive reading, reacting with some dexterity and puissance to Kerry’s wickedly virtuosic demands. What emerges from this material is full of roiling polyphonic gestures, accentuated by percussive bursts, an intriguing interweaving of soli parts tossed back and forth between soloist, strings and percussion.

The other three works on the disc take their titles from poetry, and indeed, in another time and place, might have been described as “tone poems” (less the Romanticized connotations.) From Gerard Hopkins’s That Nature is an Heraclitean Fire, and of the Comfort of the Resurrection comes Heart’s-Clarion, a sideways reference to its instrumentation for trumpet solo and strings. The soloist Geoffrey Payne gives a remarkable account, playing with imagination and intelligence, alternating between moments of disquiet and quietitude, underlined by energetic string playing which Porcelijn does not allow to descend into banality.

Bright Meniscus is borrowed from a line in JR Rowland’s April in Canberra…, with Kerry’s musical soundscape abstracted (in both meanings of the word) after Rowland’s poetic landscapes. One also cannot fail to appreciate the apposite use of “meniscus” to describe a form of surface tension under which an intricate interaction of forces are at work. On its veneer, Bright Meniscus is not a million miles removed from the generous Straussian brand of Romanticism – even if there are also deeper undercurrents of tortuous chromaticisms. Under Porcelijn’s revealing advocacy, this piece has genuine celebratory moments, especially in the final third of the work, and a joy it is to savour the music as it evolves and advances from start to end.

The title work of this album harvesting the solstice thunders was taken from a maritime-inspired Voyages cycle by Hart Crane, a constellated heterophony which, in the composer’s own words, “(finds) a satisfying abstract form.” Undeniably, Kerry has a certain penchant for coups de thtre, which the performers seize upon with much relish. Behind this stream of music-making, one can perhaps sense the wellspring of a liberated, boundless music with a desire and consciousness of its own, or what the German composer Wolfgang Rihm describes as Triebleben der Klnge: the “life force of sounds”. These works were written in the relatively short interval between 1993 and 1998, giving a certain window of insight into Kerry’s artisanship. One can recognize the common denominators of his musical language through these works; nevertheless, like the way that man-made diamond, cubic zirconium, is created in a crucible of its own material because no other substance is robust enough to withstand the forge, these formidable pieces do not necessarily present easy pleasures, but richly rewarding ones.