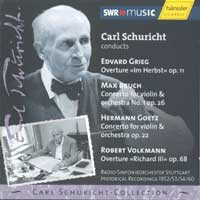 This, the ninth volume in the Carl Schuricht Edition by Haenssler Classic is put together from four different concerts from 1952 to 1960, opening with Grieg’s “Im Herbst” concert-overture, in a goodnaturedly unassuming performance that doesn’t attempt to blow the music up into anything it isn’t. Second on the disc is Max Bruch’s violin concerto featuring the violinist Hansheinz Schneeberger.

Born in 1926 in Bern, at the time of this performance he was the concertmaster of the NDR Symphony Orchestra (he was also a Walter Kägi and Carl Flesch student and played the first performance of the “first” Bartok violin concerto). Small wonder then, that this performance has a collegiality and fresh chamber music quality especially in the second movement, that one so rarely encounters in performances with today’s jet-setting virtuosos.

Though his intonation suffers ever so slightly in the beginning, Schneeberger quickly settles in and tames the difficulties the work brings. At the same time, Schuricht provides more than merely competence to the accompaniment. As with many recordings of concerti, the violinist is spotlighted so that he’s firmly in the foreground, but not obtrusively so, which is just as well since it allows us to appreciate the care Schuricht took in preparing this performance.

Neither solo part or orchestra are as fiery in some versions but soloist and orchestra play like hand in glove and this has its own rewards. Schneeberger plays from the start with panache, while not giving in to the excesses that the solo part often suffers from. Schneeberger’s exceptional qualities quickly show themselves – he not only communicates with the orchestra and conductor but also with the listener and has an wonderful, singing way with the soaring, lyrical threads of melody that make up so much of this concerto. Nowhere will you find flashy displays of technique, though he is clearly up to the challenges of the concerto, but his playing is by no means any less gutsy and he handles the virtuosic parts with panache.

Schuricht and Schneeberger relax together to allow more rhapsodic, “inner” playing in the lyrical melodic Adagio, while still being very passionate. Schneeberger’s beautiful tone is to his great advantage here and his phrasing and negotiation of the rhapsodic passages is masterful, making the best out of a work that at the time of the performance probably already too often played. In the brief orchestral passage that introduces the even more lyrical and passionate middle section of the Adagio, Schuricht proves what a seasoned accompanist he is by broadening the tempo, creating a rich cushion of sound, so that when the soloist enters the listener is even more entranced by his ingratiating tone, then picking up and following his lead easily.

Schneeberger brings out the dance-like, gypsy quality of the finale easily with his rhythmic playing, abetted by the passionate, epic quality of Schuricht’s accompaniment, with its seemingly spontaneous phrasing that perfectly complements the soloist. A truly enjoyable version, then, of this warhorse that anyone who loves the work will want to listen to. The sound quality, too, is excellent – and captures richly the contributions from both soloist and orchestra. Much less is known about Roman Schimmer, who plays the solo part in Hermann Goetz’s (1840-1876, died of consumption) violin concerto written in 1868, a work that lasts only 18 minutes but consists of four main sections. Opening with an Allegro vivace, you’d miss the thread of thematic development if you blinked – it is that compact.

The themes, very melodic and attractive are typical of that Romantic period, while not indulging in the excesses that you’d associate with them. In fact one gets the feeling of certain themes not receiving their fair share of air-time, as it were, lost in the multitude of notes in the solo part. Still, on the whole it’s a very interesting work which manages to pack a lot into its duration. A work that grows on repeated hearing. Robert Volkmann’s Overture to “Richard III” op.68, on the other hand, is as immediately exciting and engaging as any. Tumultuous and with dark themes representing the blood thirsty Richard III himself as well as the vigorous “The Campbells are comin’” and the hopeful last section (representing the rise of Richmond as King Henry VII, there is a strongly narrative streak in this work that makes it particularly attractive. It is a masterpiece that deserves a revival in the concert hall. Schuricht’s version is richly satisfying and latches on to the narrative nature of the work.