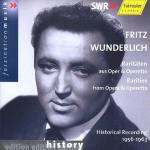 Anyone who accuses Mozart of short-changing the tenor voice has probably never heard Fritz Wunderlich essay a role like Tamino or Don Ottavio.  The young Germans effortless, focused top, rich middle voice and technical fluidity in long phrases made him a preeminent interpreter of the lyric tenor repertory by his mid-30s.  Only Joseph Schmidt, another great singer who died tragically young, could deliver equally passionate and assured performances of this kind of material. 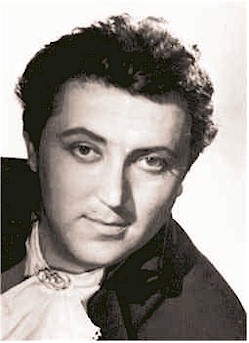 Hanssler has combed Stuttgart radio archives and culled 14 excerpts from Wunderlichs brief career, which was cut short in 1966 when he suffered a fatal fall at a friends house.  Most notable are four excerpts from Mozarts unfinished singspiel Zaide, recorded in the composers bicentennial year of 1956.  The work is a more serious precursor to The Abduction from the Seraglio, also set in a Turkish harem and featuring a rescue at the end.  Wunderlich as Belmonte (above, right) is ardent and impassioned in the first act aria Ja, nun lass das Schicksal wuten, and tastefully subdued in the duet Kannst geliebter, with the soprano Maria Stader, whose high notes are just as precise and unforced.  Another tenor solo, Wackrer Freund, voll tiefer Scham, shows shades of the melodrama Mozart would soon successfully mine in Idomeneo, his next opera and first great hit. Wunderlichs soft-grained voice is also heard in Taminos much more familiar portrait aria from Die Zauberflote.  The unrushed pace allows Wunderlich to spin elegant, fluid lines that are both sensual and tender.  One is left wondering how many years he would have dominated this segment of the repertory had he lived a full life.

The disc also features Wunderlich in excerpts from Cherubinis The Water-Bearer, which was said to have inspired Beethoven, and singing the brief but beautiful solo in the first act prisoners chorus from Fidelio  — a  reminder, the program book notes, of the bit parts he cut his teeth on early in his career (he was to pursue a career in the French horn before he was discovered by accident at a production of Zauberfloete) There is ample material from operattas, too.  Emmerich Kalmans Countess Maritza will strike many as schmaltzy but is a perfect vehicle to show off Wunderlichs excellent diction and clear, ringing top.  The tenor sounds a bit more taxed but still carefree and sentimental in Empress Josephine, a comedy inspired by Napoleon and one of the last operettas premiered in Europe before World War II.   Overall, this sampling is an excellent accompaniment to Wunderlich discs featuring better-known material, and provides a higher-resolution picture of this memorable artist.