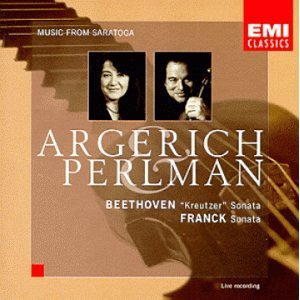 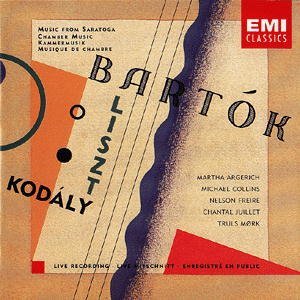 Martha Argerich has spent much of the last 20 years comfortably ensconced in performing chamber music, so it is only fitting that she is partnered on these discs with such inspired collaborators. The Saratoga Performing Arts Center in New York, where these performances took place, is the summer home of the Philadelphia Orchestra, and many of the orchestra’s players participate with internationally known soloists in the Center’s annual Chamber Music Festival. If the music-making on these discs is any indication of the usual level of performance at the Festival, then chamber-music lovers who do not live in New York or make the pilgrimage there in late July and August are definitely missing out.

The first disc, taken from the opening night of the 1998 festival, pairs Argerich for the first time with violinist Itzhak Perlman in two familiar works, Ludwig van Beethoven’s “Kreutzer” Sonata and the Cesar Franck Violin Sonata in A major. At first, the thought of Argerich and Perlman playing together sounds like a pairing of opposites – the sultan of predictable smoothness with the queen of explosive spontaneity – and in a way, it is. But the results become more interesting than one might expect.

As per his reputation, Perlman has not changed his general interpretation of the “Kreutzer” Sonata since recording it with Vladimir Ashkenazy in 1973 (Decca Legends 458618 – mid-price, with “Spring” Sonata). However, compared to Askkenazy’s smoothness, Argerich finds a wealth of shadings, accents and tempo fluctuations that make the work immensely more volatile, especially in the first movement. Perlman responds by matching Argerich’s phrasings to his tempi, and though he was more secure technically with Ashkenazy than is here, he and Argerich still take us for an exciting time. Argerich’s halting just before the concluding rush is especially magical

The central theme-and-variations movement is almost two minutes faster than in Perlman-Ashkenazy, allowing us less time to savor the music. It is also here that Perlman’s age catches up to him, with some strained playing and painful high notes. But the playing here is more unbuttoned, with a greater degree of playfulness and tenderness by both players and a larger differentiation in emotions and dynamics both between the variations and within each one. The final Rondo, announced with a crashing piano chord, becomes a joyous romp for both players, overflowing with energy and high spirits.

Compared to the joviality of the Kreutzer, the Franck Violin Sonata in A major is all beguilement and not-so-subtle eroticism. With a firm understanding of this, Argerich turns in a sultry, bewitching turn at the piano, full of half-lights and smoldering passion. If Perlman does not fully mirror her seductiveness in the Allegretto ben moderato, at least he matches her in ardor. The Allegro that follows is even more fervent; though the disjunction between the two artists still exists, Argerich’s playing leaves one breathless, if not seriously overheated.

With the Recitativo, Argerich and Perlman finally come into sync, and do so gloriously. Perlman, alternatively affectionate and alluring, thoroughly charms Argerich, who returns his entreaties with equal attention and affection. The Allegretto poco mosso, opening very gently but full of surprises, contains not only the best playing on the disc but also the finest sense of give-and-take between players. Alternating good-natured teasing with searing intensity and hushed closeness, it exudes a sexiness and charm that makes one hope these artists perform together again very soon.

The second disc opens with both the most challenging piece on the program for listeners and the only one without a piano part. Sergei Prokofiev’s Quintet, written for the unusual combination of oboe, clarinet, violin, viola and double-bass, started as a circus ballet entitled Trapeze for a Russian émigré company in 1924. The idea for the instrumentation was the ballet company’s, but Prokofiev rose to the occasion with a score that is by turns angular, stark and pungently witty. Though far from the most listener-friendly score Prokofiev wrote, it does have a roguish charm that ingratiates itself with repeated hearings.

What is truly interesting, though, is how thoroughly unlike the rest of Prokofiev’s output the Quintet truly sounds. Though parts of its six sections will sound familiar to those who know his other ballets of the period, especially Pas d’acier, the general austerity and piquancy of instrumental color is redolent of Stravinsky on one hand and Eric Satie and Les Six on the other. All six instrumentalists acquit themselves admirably, and special mention must be made to double-bassist Harold Robinson for his sly solo turns in the second and sixth movements.

With Franz Liszt’s Concerto pathétique, Argerich returns to the stage with fellow pianist Nelson Freire in a performance that is equal parts ambrosia and brimstone. Written in 1850 as a one-movement solo work and revised the following year into a multi-sectioned composition foreshadowing the Sonata in B minor, it was recast as a two-piano work several years later. Two piano-and-orchestra versions also exist – one in the original one-movement form and the other in the multi-sectioned version.

Like many of Liszt’s works, the Concerto makes a more massive and dramatic impact when played at a slow tempo. Argerich and Freire understand this thoroughly, bringing considerable weight and portent to the work’s opening, while showing the more athletic passages as not just pianistic fireworks, but as demonically-inspired catastrophes on a canvas by Hieronymus Bosch. The lyrical episodes are also treated expansively, with great tenderness, nobility and expressiveness. Die-hard Argerich fans and any other lovers of extraordinary piano playing should not hesitate in buying this disc, even for this performance alone.

But there is more. Bela Bartók’s Contrasts for piano, violin and clarinet is given an equally charged reading of sardonic humor and searing expressiveness by Argerich, violinist Chantal Juillet and clarinetist Michael Collins. Contrasts is one Bartók piece that has usually left me cold, though I can appreciate the craft and the verbunkos sound that Bartók captured so well in these three short movements. However, unmoved is the last thing you may be after hearing this performance.

The opening Verbunkos oscillates wildly between biting wit and black despair, leavened only fleetingly just before the recapitulation. The middle Piheno is hauntingly elegiac, even frightening, with the trills in the center of the movement that will freeze your blood before Bartók’s night music steals in for an all-too-brief a reprieve.

The violin solo opening the Sebes whines like a demented danse macabre before the other instruments join in a whirlwind of activity that becomes a dance of life, love and celebration. Argerich, Juillet and Collins are incredible in the ever-changing rhythms of this movement, underlining the many shifts in tone, leaving one hanging on the edge of one’s chair in anticipation and awe. The applause at the end of this track was definitely well-earned, and don’t be surprised if you want to join in.

I do have some quibbles about the packaging of these discs, which blatantly shows which one EMI believed would sell more copies and was worth better treatment. While the cover of the Perlman-Argerich disc has been given the high-concept treatment (overlays, metallic inks and such), the quasi-Cubistic poster treatment of the Bartok-Liszt-Prokofiev cover looks comparatively flat and second-rate. So does the labeling on the disc itself, which appears half-finished compared to the Perlman-Argerich

There is also a one-page write up on the Saratoga Performing Arts Center printed in the Perlman-Argerich disc that is missing from the other disc. Since EMI actually released the Bartok-Liszt-Prokofiev before the Perlman-Argerich (even though it follows the latter in its catalog number), this omission has been a disservice to buyers, including myself, who were unfamiliar with Saratoga and wondered why Argerich would play there. The message: We know you’ll buy this disc for Argerich, but we don’t think 20th century music is worth more than the bare minimum needed to produce it. Bad move, EMI. The good news, thankfully, is that the performances on that disc more than compensate for this gaffe.