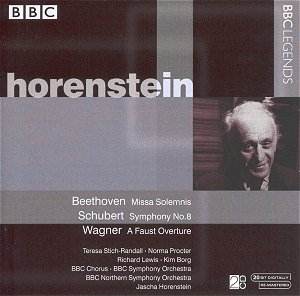 Ludwig van Beethoven
Missa Solemnis in D major, Op.123
Teresa Stich-Randall, Norma Procter, Richard Lewis, Kim Borg
BBC Chorus
BBC Symphony Orchestra
rec. BBC Maida Vale Studios, London, 23 February 1961
Franz Schubert
Symphony No.8 in B minor, D759 “Unfinished”
BBC Symphony Orchestra
rec. Royal Albert Hall, London, 15 September 1971
Richard Wagner
Eine Faust Overture
BBC Northern Symphony Orchestra
University of Salford, England, 23 April 1972
All conducted by Jascha Horenstein
BBC Legends BBCL4150-2
by Derek Lim
The last decade or so has been a exciting time for Jascha Horenstein fans. Though so much Horenstein material remains, frustratingly, unavailable, we must be thankful to record labels such as BBC Legends for taking a chance in releases such as these, which, when all is said and done, must be a niche market.
This release of Beethoven’s towering Missa Solemnis stems from a live performance given in 1961 with the BBC Symphony Orchestra. The notes, eloquently written by Joel Lazar, note how Horenstein had insisted on piano rehearsals with the solo quartet, where many would be content with simply orchestral rehearsals coming closer to the date of performance. His solo quartet Teresa Stich-Randall, Norma Procter, Richard Lewis, Kim Borg are distinguished, but the hero in the end is Horenstein.
In comparing Horenstein with Klemperer’s justly famous studio recording, also made in London, one realizes the strengths of both conductors, but also what it is exactly that makes the Klemperer recording so special. Horenstein shines in that he creates a seemingly unending arc in his performance, each movement given its place, underplayed even, so that the architecture of the work stands – an approach that made his Bruckner performances so special and that still divides critics as to his Mahler performances, who find his adoption of a single tempo for every movement, stubbornly refusing to indulge in agogics, detrimental to the inner texture of Mahler.
And so it is here – each movement is subsumed in the whole rather than emphasized. Nevertheless several moments in the canvass deserve special mention – in the Credo – Et incarnatus est is magical and later, Et homo factus est by the tenor is truly moving. The Benedictus is simply wonderful, the leader in fine form. The appeals for mercy in the Agnus Dei, Beethoven’s personal appeal for peace on Earth, will move all but the most stone-hearted.
All in all, this by no means supplants the version by Klemperer. For one thing, the vocal quartet, while distinguished, hardly come close to the standards of Klemperer’s solo quartet. Marja Höffgen especially, in her opening Kyrie Eleison, is particularly moving.
The rest of the second disc is completed by Schubert’s Unfinished Symphony and Wagner’s Faust Overture. In the evergreen favourite, Horenstein keeps a disciplined rein on his orchestra (again, the BBCSO), evincing a muscular and dramatic reading in the vein of Furtwängler, lyrical and Beethovenesque at the same time, while keeping a keen eye on the structure and inner logic of the work.
The rarely-played Faust Overture – Wagner’s foray into writing a symphony (it was planned as the first movement of a Faust Symphony – something that Liszt, his father-in-law ended up writing instead) must have been something of a pet work for Horenstein – he recorded it once with the Vienna Symphony Orchestra on VOX, a much faster performance, as Joel Lazar’s notes rightly note. I cannot imagine stronger advocacy for the work than Horenstein’s two versions – this version is as well-played and characterized as the other, though this is naturally in better sound. It’s an interesting piece, a minor one, no doubt, but it’s interesting to hear how much attention Horenstein paid to it.
This release is, as you may gather, warmly recommended. Snap this up before it becomes unavailable!