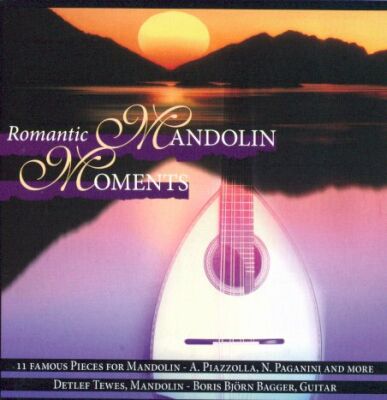 Composers long dead rub shoulders with those still living in this well thought-out compilation of works for mandolin and guitar. The title of the disc is misleading – firstly the works are for mandolin and guitar, indeed the guitar, due to its greater freedom (number of strings, ability to play multiple, crossed strings etc) often plays more than the mandolin. Secondly, “Romantic Mandolin Moments” scarcely does justice to what is in fact a disc which amounts to something of a tour de force of the repertoire rather than a pop song compilation that such a title might suggest. The combination of guitar and mandolin is cruelly exposing, but the guitarist and mandolinist in question, Boris-Bjorn Bagger and Detlef Tewes are superbly up to the demands of the music. They both have an ingratiating tone, beautifully caught by the Hannsler engineers, but that’s only the start of it.

If you’ve ever played a plucked instrument like the mandolin you’ll be well aware of the perils that await the performer whose left and right hands and imperfectly coordinated. Unlike string instruments, even slight mismatches can lead to the emergence of ugly sounds from the instrument. None are to be heard here. Tewes plays with genuine flair for the instrument. His right hand, moreover, displays a flawless, even tremolo, not the tightest, perhaps, that I have ever heard, but still beautifully clear and a joy to listen to. The same tremolo, but over two strings, remains remarkably even, as can be heard in Marucelli’s Capriccio Zingaresco (Gypsy Caprice – doesn’t everything sound a little less romantic in English?), a great encore piece, by the way, that Tewes plays with gumption and virtuosity.

Seventy-four minutes of music for this combination of instruments might seem almost too much of a good thing, but not when it’s as good as this. The repertoire, as I suggested earlier, is impeccably laid out on the disc, starting off with Piazzolla’s Histoire du Tango (Story of the Tango), a work in three movements with more music than belies its title – Piazzolla paints huge canvasses with large brush strokes and the result is evocative and mesmerizing, each movement describing a totally different scene: Bordel, Cafe and Night-Club. Cafe 1930 is melancholy, tender and affecting,  Night-Club 1960 is full of a Latino fire and flair, with colour and vibrancy abounding both harmonically and rhythmically. Paganini has his nine minutes in the Adagio cantabile and Rondo from his Sonata No. IV, charming pieces that show the flip side of the great violinist (he also played the guitar). The Neapolitan Carlo Munier (1859-1911) has the most playing time on the disc, warranting a full twenty minutes. I’m indebted to the notes when I tell you that he was “the uncrowned king” of plucked strings, publishing a large number of works. Here we have the first movement of his Concerto op. 163 and his Ariata variata, graceful, well-crafted and at the same time technically demanding (imaginative too: check out the fourth variation, with its melody plus self-accompaniment on two lower strings – worthy of a Paganini!). Don’t miss the last movement of the Ariata variata – great fun! I mentioned earlier Marucelli’s ebullient Capriccio Zingarese. Equally fun to listen to is his Valtzer Fantastico. Again it is technically demanding, but also nostalgic and a gentle sweetness (sometimes bordering on the saccharine, I’ll warn you) runs through the music. Three “modern” pieces, by Preema, Kangro and Sumera are included here and show off the possibilities on the mandolin and guitar. By way of encore, we have My Way (yes, that My Way), with a soft “pop” accompaniment. Why not the Godfather Theme then? Perhaps the next disc? I’d recommend this recording to anyone vaguely interested in great playing on the mandolin and/or guitar.