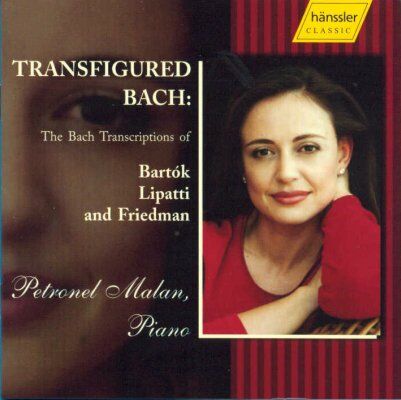 Transfigured Bach The Bach Transcriptions of Bartók, Lipatti and Friedmann

This is a remarkable album, not only for the repertoire, for we finally get to hear some of Bartók’s transcriptions, but also for the pianism and musicianship of Petronel Malan. I must confess that the name has hitherto escaped my attention. Ms Malan (above) was born in South Africa into a political family of French Huguenot descent. Her mother was an opera singer and she studied piano with her from the age of four, later receiving lessons from the late South African pedagogue Adolph Hallis and debuting with the Johannesburg Symphony at the age of ten playing Kabalevsky’s Youth Concerto. Since then she has won gold medals at various levels and according to the biography in the sleeve notes, won virtually every competition she has taken part in since. Listening to this album, you can see why. Tone, temperament and technique Malan has in abundance, but digital brilliance and independence are put to the service of the music, and the counterpoint holds no terrors for Malan, without having to resort to the sometimes gimmicky style playing

style of Glenn Gould.Comparisons with her contemporaries are inevitable, and the Canadian pianist Angela Hewitt’s (right) name immediately springs to mind. I think it’s premature to say very much about how Malan would play other repertoire, but I would go so far as to say that she’s in the very least as interesting as Hewitt, without sounding as cultured, perhaps, for some reason, but with slightly more

temperamental playing, and always tasteful.The transcriptions on this disc comprise mainly of those by the great Polish pianist Ignaz Friedman (left) – there are ten by him. These include the now-spurious d-minor Toccata and Fugue, BWV565 (not quite as interesting as that by Tausig, perhaps, especially when it’s Earl Wild who plays it). Friedman doesn’t really dress up the music in his own musical style – many of the transcriptions are straightforward – the first movement of the third Brandenburg concerto, for instance, and “Sheep may safely graze” BWV208. Elsewhere he takes the music as the starting point and elaborates on it, for example in the Bourree from the First Violin Partita BWV1002. An impish sense of humour emerges in the Gavotte en Rondeau from the third violin partita. Malan negotiates the difficult thirds and sixths and octaves with no problems at all, and the music bristles and sparkles. The transcriptions of slow movements are elegant and

beautiful.The remainder of the transcriptions comprise the world premiere recordings of Dinu Lipatti and Bela Bartok — the Pastorale in F major for Organ BWV590 and Sonata No.6 in G major for Organ BWV530 respectively. Not surprisingly, they are quite faithful to the original. No one could play Bach like Lipatti and I’m glad we have the chance to hear a transcription by him – it is like a reflection through the eyes of the great pianist. Bela Bartok was no slouch – many who knew him, including Gyorgy Sandor considered him the equal of the great composer-pianists. His transcription is invigorating. This disc was  sheer joy to listen to from start to finish, and I highly recommend it. Hurry up, Haenssler, and record more of Petronel Malan in anything you can get her to record!

BACH Transcriptions for Piano by other Composers. Lauriala (Naxos) – INKPOT