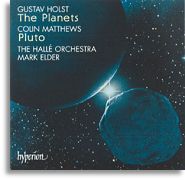 Only seven planets had been discovered in our solar system when Gustav Holst penned The Planets. While Pluto was discovered in 1930, four years before his death, Holst apparently never thought about appending his most famous work. As pointed out in the notes for this disc, Holst thought of this work as much a commentary of the seven ages of man (as penned by William Shakespeare in As You Like It) as of his short-lived interest in astrology. Does this mean Holst equated “Mars – The Bringer of War” with childbirth, “Venus – The Bringer of Peace” with youth, and so forth? It’s an interesting concept, and not as outlandish as it may seem at first when you consider the musical content of each section. However, it also means that Holst probably thought of the work as complete regardless of subsequent astronomical discoveries.

Nevertheless, Colin Matthews (born 1946; right) was commissioned to write Pluto for the Hall Orchestra, which premiered it on May 11, 2000. Matthews, perhaps best known for his work with Deryck Cooke on the Mahler Tenth Symphony, had mixed feelings about the project, and admits that the dedicatee, Holst’s daughter Imogen (with whom Matthews worked for many years until her death in 1984) “would have been both amused and dismayed by this venture.”

So, I suspect, will anyone hearing this disc. Beginning several seconds before “Neptune” normally ends, “Pluto” is even more spectral-not ethereal but harder-edged, like a ball of ice whirling through the cosmos-with the ghosts of Berg and Scriabin overshadowing the proceedings. Some might object to the discontinuity of style from the rest of The Planets, but Matthews states it was not his intent to write a piece in Holstian style. This may have actually been a wise decision; a Holst clone would have been more disincongruous than what Matthews supplied.

The Seven Ages of Man[The following passage and its notes are taken from the opening screen on Shakespeare’s life on the CD ROM Shakespeare’s Life and Times.] Jacques: All the world’s a stage, And all the men and women merely players; They have their exits and their entrances, And one man in his time plays many parts, His acts being seven ages. At first, the infant, Mewling and puking in the nurse’s arms. Then the whining schoolboy, with his satchel And shining morning face, creeping like snail Unwillingly to school. And then the lover, Sighing like furnace, with a woeful ballad Made to his mistress’ eyebrow. Then a soldier, Full of strange oaths and bearded like the pard, Jealous in honour, sudden and quick in quarrel, Seeking the bubble reputation Even in the canon’s mouth. And then the justice, In fair round belly with good capon lined, With eyes severe and beard of formal cut, Full of wise saws and modern instances; And so he plays his part. The sixth age shifts Into the lean and slippered pantaloon With spectacles on nose and pouch on side; His youthful hose, well saved, a world too wide For his shrunk shank, and his big manly voice, Turning again toward childish treble, pipes And whistles in his sound. Last scene of all, That ends this strange eventful history, Is second childishness and mere oblivion, Sans teeth, sans eyes, sans taste, sans everything.

Still, “Pluto” suffers tremendously in comparison to its more famous sister planets. Is it as substantial or memorable musically as Holst’s work? At first I thought “No,” but the more I listen to the piece, the more it reveals its own merits; and if you think of Holst’s “Mars” as music of childbirth, the title “Pluto – The Renewer” and the similar tone of parts of the Matthews piece emphasizes a cyclical connection, with the ages of man continuing afresh. However, as much as I would not mind hearing more of Matthews’ work myself (including, perhaps, his own take on the rest of our solar system should he someday proceed along those lines), this is not a piece I will return to very frequently, if at all, in its current context. The original version of “Neptune” is included at the end of the disc for those who want to skip the Matthews.

The rest of The Planets is a middle-of-the-road performance that will not replace anyone’s current favorites. In Mark Elder’s hands “Mars” sings rather than thunders, and his emphasizing the heldentenor-like quality in the melodic line over the Le Sacre du Printemps-like rhythmic force brings us back to the composer’s Wagnerian roots. It’s a fascinating interpretive gamble that he dares to carry throughout the work.

Unfortunately, this gamble does not pay off because Elder never builds enough tension to hold the listener’s attention. There’s plenty of sound and even some fury but nothing truly gripping about it. The music falls flat after major climaxes, making The Planets feel more episodic than usual, which defeats the idea of unifying the work with a basically melodic approach. The true pity is that this practice, as unorthodox as it may seem, could have worked extremely well. Enough hints remain in this recording to indicate that Elder’s basic idea was a good one, even with the occasional strange touch such as starting “Venus” louder than the beginning of “Mars.”

A late neo-classical work of Holst’s that follows Pluto, the Lyric Movement for viola and string orchestra, is actually the best-played work on the disc. Elder and violist Timothy Poole capture the elegiac character of this work very well, though Elder’s understatement robs the climax at 3:42 of its cathartic power. Even here, the music wears out its welcome before the end because of a lack of tautness to pull us with it.