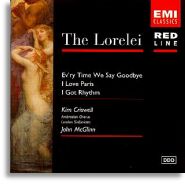 Porter Give Him the Oo-la-la (Du Barry Was a Lady)
Porter He’s a Right Guy (Something for the Boys)
Hart/Rodgers It Never Entered My Mind (Higher and Higher)
Hart/Rodgers Johnny One Note (Babes in Arms)
Dietz/Schwartz) You and the Night and the Music (Revenge with Music)
I. Gershwin/Weill Jenny (Lady in the Dark)
Porter Ev’ry Time We Say Goodbye (Seven Lively Arts)
Porter The Leader of a Big-Time Band (Something for the Boys)
Hammerstein/Kern In the Heart of the Dark (Very Warm for May)
I. Gershwin/G. Gershwin The Lorelei (Pardon My English)
Comden/Green/Bernstein Dream With Me (On the Town)
Porter I Love Paris (Can-Can)
Porter Katie Went to Haiti (Du Barry Was a Lady)
Berlin Let’s Go West Again (Annie Get Your Gun)
Hart/Rodgers Ten Cents a Dance (Simple Simon)
I. Gershwin/G. Gershwin I Got Rhythm (Girl Crazy)

EMI have ingenuosly colour-coded their Red Line super-budget series into ten various categories, like Symphony, Concerto, Opera, Chamber etc. Perhaps it isn’t as surprising to find that they have included one for “Film & Musical”, earmarked mostly for re-releases of music recorded by John McGlinn and the London Sinfonietta. This present disc, featuring chanteuse Kim Crisswell, is one such reissue, featuring songs – some well-known and others less so – from the nascent years of the American musical. 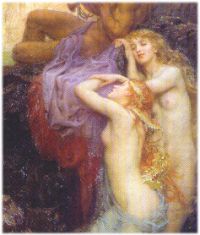 As a form of theatre art and entertainment, the genre of the American musical (invariably synonymous with Broadway) was largely due to the creativity of Jerome Kern in the pre-war years, which over the succeeding decades expanded to include the Gershwin siblings, Rodgers and Hammerstein, Lorenz Hart, Cole Porter, Irving Berlin and Leonard Bernstein. These were also the halcyon days of celebrity performers – Ethel Merman, Astaire and Rogers.

Simultaneously a vehicle for social criticism, political commentary as well as mass entertainment, American musical theatre encapsulated the melting-pot culture of an immigrant nation in way that differed from, say, the satirical potboiling Viennese operettas of the post-Napoleonic era, or the stratified Savoyard musicals of Gilbert and Sullivan in Victorian England.

Modern theatre audiences, regrettably, have little or no interest and knowledge of these early efforts – usually in preference to lavishly staged mega-productions, sometimes involving falling props and stage fireworks of one kind or another. (Not that flying houses or collapsible barricades are bad, of course, but between good props and good music, give me good music anytime.)

This album brings back some of the old-time nostalgia, while showcasing Kim Criswell’s stupendous vocal abilities. It’s hard to classify Ms Criswell in the usual classical terms – I suppose “singing actress” comes as close an appellation as any. More recently, she successfully assumed the prominent role of Ruth in Wonderful Town (with Rattle, on EMI 556753-2); here, she sings a string of hit melodies from nostalgic Broadway.

These are delightful objets d’art, dangerously fraught with rich, lyrical invention and definitely worth more than just mere curiousity value. For the most part, they are delivered with showstopping – dare we say definitive – aplomb by Criswell: her range goes from dusky soubrette in In the Heart of the Dark to minxy mezzo in You and the Night and the Music. Her tangy voice is provocative as it is delectable in its quicksilver quality, not to mention the razor sharpness of her diction. John McGlinn and the London Sinfonietta are also in their natural habitat here, puttin’ on the big show with Criswell.

The opening number Give Him the Oo-la-la and the closing number I Got Rhythm simply overflow with vivacious fun to start and close the album with maximum delight. Criswell brings the most out of the syncopation in “oo-la-la”, as well as in the title work The Lorelei: her coyishly affected quasi-Teutonic accent and hard-crunched consonants simply add to the sardonic humour in the lines: “I’m lecherous, ja, ja.”

Her sense of the comic extends even into the party pieces like Johnny One Note, Jenny and The Leader of a Big-Time Band. At its extreme, Katie Went to Haiti contains far too many aliterations and rhymes than is mentally healthy for anyone, and even with Criswell’s seemingly endless verve, it does get wearisome by the time you reach the third stanza.

Thankfully, not all the music here is high-octane: He’s a Right Guy will conjure shades of Begin the Beguine – both, of course, Porter’s compositions. Ev’ry Time We Say Goodbye is voiced with Criswell’s huskiest demeanour, with the tolling bell at the end wrenching out the ennui of separation; Dream with Me has a quiet, heartfelt quality to it. More ardent yearning at the end of Let’s Go West Again and the narrative melancholy of Ten Cents a Dance balance out the contents quite nicely.

All in all, this is a sublime performance of some really nice songs from a bygone era: at this price, it is more than a worthwhile acquisition. Kim Criswell, if you have not heard her sing before, is simply a revelation; I suspect, too, that most listeners unfamiliar with early Broadway repertoire will find this a most welcome introduction to this music.

On the minus side, if any, the sleeve notes are minimal, even if this is a super-budget label. (After all, we have seen other super-budget labels which produce superlative documentation.) A pity there, as everything else on this album gives much to savour.