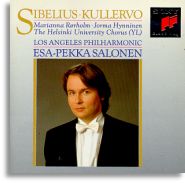 This is one of the finest Kullervos on record – especially if you count modern records. The superb 1992 Sony recording is crisp and clear, revealing many details from top to bottom, the sound full of body as well.

The Los Angeles Philharmonic Orchestra does America proud, responding splendidly to the music’s curves, bursts and corners. I find myself hearing everything much more clearly, in much more detail. Salonen must have done much to cultivate a sense for the music’s shapes in the orchestra – the phrasing exhibited by the LA musicians are very expertly sculpted, very musical. They are absolutely together, and solos are remarkably confident and even-toned.

Fantastic work by the percussion section for example; listen for the triangles and even Sibelius’ highly original timpani writing. Not to mention the famous brass of the Americas – too many examples here, humming funereally, blasting in battle and glory; and of course concluding everything in heroic voice – watch out for the trombones and horns. The bass lines, another Sibelian hallmark, are also excellently drawn in the orchestral picture. And the flutes, fluttering and chirping brilliantly throughout. The other way of putting all this is – the orchestra and conductor are very well-rehearsed; they sound as if they’ve been playing this all their lives and never got sick of it. The enthusiasm is very infectious.

In particular, I find their dedicated service to the choral and vocal parts an excellent model of how choral-orchestral music like this should be done. The orchestra matches each and every singer phrase for phrase, coming in perfectly to punctuate their vocal drama. Even without the voices, there is a very real sensitivity towards the theatre of the score – see the subtle and so luscious change of pace at 6:06 in Kullervo goes to War. Very nice. All this breathes new life to the Kullervo score for me.

Marianne Rørholm’s role is sung with a natural sense to the drama of the work; she has a “laid-back” voice, is in full control, and makes her part sound unusually easy. Her smooth throaty tone suits the music extremely well – it brings out the nobility but also the tenderness of the part. I have rarely heard the central passage of Kullervo’s sister sung with such lyric sweetness. It is arguably the most attractive performance I’ve ever reviewed. Rørholm’s rendition of the awkward and fast recitative-like rejection passage is also very well done, more natural than most versions I’ve heard – I think her answer lies in getting it over quickly but light-footedly. The scene on the peak where her calls are answered seemingly by the evocative chirps of woodland birdsong is particularly beautiful as well – credit to the LAPO flutists too.

Jorma Hynninen (left), the world’s most experienced Kullervo (not just Sibelius’ Kullervo, but also Sallinen’s opera on the same story) no doubt, is his usual self. It is almost trivialising to put it this way, but that’s how it is! He is in magnificent voice here, if a tiny bit less lyrical than I remember from his older recordings. Neither is the “Woe my day” passage as anguished and delirious as the 1985 Berglund recording, but again – what a heroic baritone this is!

Even the choir in attendance, the (male chorus of the) Helsinki University Chorus is no doubt the world’s most experienced Kullervo chorus. Their singing brims with confidence but also a kind of relaxed restraint, which does wonders for their choral role as narrator (much like a Greek chorus). There is also more than a touch of familiarity in their interpretation, at least on the part of this listener. But here and there, there are details which set this performance apart, beginning with their first appearance – listen for the dip in dynamics at the 5th line, “Läksi viemähän vetoja” – you don’t quite hear this level of detailed conducting elsewhere.

The ending of the central movement is not the most dramatic (read: violent, tragic) of the versions I’ve heard – for that, I will still refer to the Berglund versions (particularly Hynninen in the 1985 recording).

Berglund’s Kullervo has brought tears to my eyes – now I add to this small hall of fame Salonen’s recording as well. I find the final movement utterly tragic – the sword scene is a powerful drama mixing the gruesome nature of suicide with the tragedy of Kullervo’s guilt, mashed almost cruelly into the tongue-stinging irony(?) and unforced truth of the sword’s answer. Salonen’s and his group’s performance of this movement is completely stamped with authority and power – the Helsinki University Choir and orchestra seem part dramatist, part jury, painting and sealing Kullervo’s shocking fate. Immediately after his death, the funeral orchestral passage is incredibly beautiful yet tragic – most poetic; its quiet languishing in direct contrast to the final burst.

By and large, one of the greatest assets of this performance is its extremely high level of finesse – as I’ve said, it sounds very well-rehearsed. Everything is in control, though not tightly so. Indeed, it makes a perfect opera – I wonder again if it’s possible to stage a theatrical version of the work. If I have to find a flaw in the performance, it could be that there is a small loss in terms of outright abandon – for example, the most “violent” passages are not as earthshaking as those done by Berglund. But this is not truly a major fault – no one investing in Salonen’s superlative effort here will be disappointed. By all means, listen to the classic Berglunds as well.