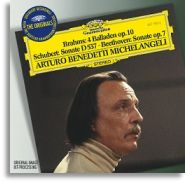 This recording of the Brahms Ballades have long been regarded as a “desert island” recording by many, and this latest remastering has encouraged me to join their ranks. When I played the previous CD issue of this performance, the upper notes stood out, making the First and Fourth Ballades, to my ears, seem lighter and brighter than they should have been. Especially in the First Ballade, a musical retelling of the tragic “Edward” from Herder’s Stimmen der Volker, when a young man confesses to his mother that he has just murdered his father, light and bright are not exactly the most beneficial qualities to evoke.

In the DG Originals release, the bass is given more prominence, with excellent results. Michelangeli took great pains to record these seemingly subdued but actually complex and multi-layered works on a piano made in the 1910s to help give them a blended tone and a mellow sonority. Not only is the rich piano sound back in its entirely, but the balance and drama for which Michelangeli strove comes vividly to the fore.

No one has paired the beauty of the treble line in the First Ballade with the sinister overtones of the bass with such a razor-thin clarity or poise, or slowly allowed that sense of tragedy to envelop us with such an icy grip. In moments like these, it is easy to see how nothing less than a piano like the one Michelangeli used could do justice to the sound world he set out to evoke; and it is a tribute to the engineers who remastered this disc that they succeeded so well in recapturing that sound for us, allowing us to hear the totality of Michelangeli’s concept.

The A minor Piano Sonata, an early work Schubert wrote in 1817, also comes off well in Michelangeli’s hands. He is very quick-fingered at the start of the opening Allegro, as well as at the repeat of those measures, at the expense of charm, but he gives the lyrical sections room to breathe, and the slightly autumnal coloring of these episodes, which would seem more in character with the late piano works than here, actually works quite well. The central Allegretto is cool but without a trace of sentimentality, which helps the music. The final Allegro, though it could perhaps smile more, gains enough weight and mystery to make the movement more substantial than it is, but not so much as to overwhelm it. The more I listened, the more I appreciated Michelangeli’s sense of balance.

Conversely, charm is something Michelangeli’s Beethoven Fourth Piano Sonata possesses in abundance. Here the competition is fierce, with both Emil Gilels and Wilhelm Kempff having made excellent recordings of this work. Michelangeli more than holds his own, giving the piece a relaxed, sophisticated savior-faire that would seem to go against the nature of this work. But, as in the Schubert, there is a rightness to his interpretation that disarms criticism.

After the boulevardier quality of the opening Allegro, the Largo comes off with both depth and grace, while the coquettish charm Kempff brings to the Allegro is replaced with a detached poise, as though not to muss the hairs on its perfectly coiffed surface. Michelangeli lets a gentle smile break through in the final Rondo, however. While not downplaying the dramatic central episode of this movement, Michelangeli integrates it into the general fabric of the movement, giving the notes their full weight but closely regulating their flow and pace to hold everything together. The result, as in the other works on this disc, is a balance of elements that borders on the preternatural and is eminently satisfying.