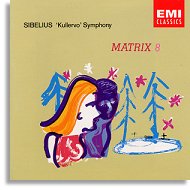 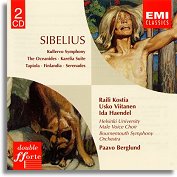 At long last, EMI has reissued the legendary world-premiere recording of Sibelius’ Kullervo Symphony, made in 1970 by Sibelius scholar and conductor Paavo Berglund. Though the music was composed and first performed in 1892, over one hundred years ago, Sibelius withdrew it from the world, and only allowed the third movement to be performed in celebration of the centenary of the publication of the Kalevala in 1935, when the composer himself was 60 years of age. 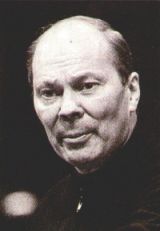 Since then, Sibelius’ choral symphony was not performed in its entirety until 1958, the year after his death. It was only finally recorded for the first time ever in November 1970. Paavo Berglund (left) recorded it again in June 1985 with EMI Records, in a much-acclaimed performance. But it is this 1970 world-premiere which many Sibelius fans have been waiting for.

Now, in what seems to be a double-dose of celebration for these fans, EMI has not only released John Barbirolli’s beautiful cycle of the symphonies, but also this – I must confess at having scoffed and cursed at EMI’s many strange policies regarding the circulation of their recordings. For now, I must issue my heartfelt thanks.

So how does this “new”, older, Kullervo compare to the 1985 recording? As with Berglund’s Bournemouth cycle of the symphonies

, it is at least revelatory, to say the least. The performance sounds matured and well-prepared – which is a major point considering that this is the world-premiere recording of a rarely-encountered piece of music at that time. On first impression, it is also clear that the 1985 recording is much better, with finer details and crisper colours; the strings are richer, the brass mellower, the rhythms and figures sharper.

In terms of interpretation, both versions exhibit very fine stature, with the later one sounding more sure of itself, not surprisingly – as if it has grown up. This is not to say that the earlier recording is unsure, but rather it has a greater impression of exploration – which is exactly what the classical recording world was doing then with Kullervo.

And what an impression it must have received – 78 years after its debut performance, Berglund’s reading does more than ample justice to this majestic score. The impact of the unravelling introduction, the tragic-heroic brass outcries, the pathos of the singers, the chanting chorus – surely, it is not hard to imagine the impact which Sibelius wrought on the Finnish world of music during his time.

The heart of the work, Kullervo and his Sister, receives fine performances on both recordings. The choral entry on both are fascinating. The later 1985 version has more kick, more energetic drive, sharper-toned strings, even more heroic atmosphere. But listening to the 1970 version, I find it refreshing in its certain youthfulness, its smooth delivery backed – on both recordings – by the foot-tapping pulse of the bass line. At the same time, the relatively inferior 1970 recording only brings into sharp contrast the details of the 1985 version. In any case, what satisfies me about Berglund’s way with the work is how he brings so much underlying energy to the music, despite its fairly moderate pace and the simplicity of the devices Sibelius used to constuct the music. If like me, you should grow to like this music, I assure you, you will be memorising the first six lines of the chorus in no time – such is the heroic momentum of the Helsinki University Male Choir (and company).

The baritone employed in 1985, Jorma Hynninen, is a highly experienced Kullervo. With a much darker voice, his rendition is somewhat more “Wagnerian” in style, certainly more dramatic and dynamic. However, Usko Viitanen’s contribution to the world-premiere is quite excellent, sung with much emotional power and sincerity. His is a more noble Kullervo, perhaps, more meditative. His anguish at the realisation of his incestuous deed has a tragic dignity; but in Hyninnen, the sense of horror mixed with guilt is stronger, the emotions of the story more visceral.

The soprano part of Kullervo isn’t exactly a particularly “visual” experience, consisting quite a bit of “wandering”. It’s emotional message is either underplayed or subtle, depending on your perspective. The main chunk, in which the sister reveals that her father is the same as Kullervo’s, simultaneously describes both her contented youth and her admission of guilt – The part is rather hard to pull off satisfactorily if only because Sibelius’ musical-emotional dynamics here are rather subtle.

Of the sopranos on record, Raili Kostia gives an adequate reading in 1970. But Eeva-Lilsa Saarinen’s interpretation in 1985 is more multi-dimensional, depicting the scenes more distinctly. In the passage where Kullervo’s sister defiantly rejects him in fast, semi-stuttering fashion (“Päästa pois minua tästä”), Saarinen’s jittery reading is more natural than Kostia’s rather more rigid, almost straight-staccato rendition.

One interesting difference is in the final chords – the earlier version is actually much more angry and defiant of tone, which I find much more appropriate to Berglund’s smoother, less-sharp 1985 interpretation. In any case, both orchestras in both records are absolutely splendid. However, in terms of vocal soloists, the 1985 version is superior.

Berglund’s 1970 rendition of the fourth movement, Kullervo goes to War, is absolutely spectacular stuff – the volatile energy and pure living imagery the Bournemouth musicians conjure is a splendour to behold – watch out for the brass, how they fanfare at each other with pinpoint staccato and confidence; or the collective chirps of the woodwinds, the fluttering winds – this so much makes me want to ask Sibelius what he was picturing in his mind when he wrote this. This is an all-out amazing journey all Sibelians must hear, right up to the shattering trumpet blasts of the heroic conclusion (don’t miss that!). The best Kullervo goes to War I’ve ever heard.

By contrast the later version of this movement is taken slower – 10’01” versus 8’52”. The pace is thus slower, and the old recording even matches the newer one in sound quality. Without a doubt, in this case, the earlier 1970 performance wins hands down.

Kullerov, Kalervo’s offspring,
Grasped the sharpened sword he carried,
Looked upon the sword and turned it.
And he questioned it and asked it,
And he asked the sword’s opinion,
If it was willing to slay him. …

“Wherefore at my heart’s desire
Should I not thy flesh devour,
And drink up thy blood so evil?
I who guiltless flesh have eaten,
Drank the blood of those who sinned not?”

The Kalevala
excerpts from Cantos 35 & 36

The finale, Kullervo’s Death, is spectacularly well-performed in both recordings. The 1970 version, however, has more emotional depth – I find myself sympathising with it more even as in the past I have sympathised most with Berglund’s 1985 version. It seems as if, as we follow the two recordings towards the end of the music, Berglund’s 1970 performance shows more and more of its true mettle.

In the final analysis – the 1985 version is a better recording, has better soloists; but the 1970 version has stronger conclusions; in both cases, orchestral support is beyond reproach – these are two fantastic orchestras at work here, and Berglund deserves to have both recordings lauded.