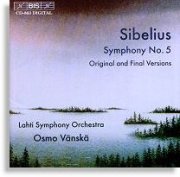 Like the disc of the two versions of the Violin Concerto (BIS-CD-500), this record couples the first and final (third) version of Sibelius’ Fifth Symphony. BIS’s re-release of the original 1915 Fifth Symphony (also available on BIS-CD-800) here makes the Vänskä cycle a unique treasure. Presumably, the manuscript has been returned and it is unlikely that the Sibelius family will allow it to be recorded again.

The original 1915 version is in many senses quieter and not as bold as the final. For example, the dawning horn-call of the opening is missing. Instead, you have a serene sky of soft horns where, almost tentatively, the woodwinds call out to each other. Even more significantly, the original Fifth is darker. I don’t mean to say that the music sounds less “tonal” or is more sad. Rather, the contrast between sections of light and darkness is much greater. If the final Fifth is “light/dawn”, and the Fourth Symphony is “dark/dusk”, then the original Fifth is a magical aurorae of wavering darkness and light, full of mystery. It encapsulates the organic-musical link between the “bleak” Fourth and the optimistic Fifth, a bridge that I had been looking for for years. 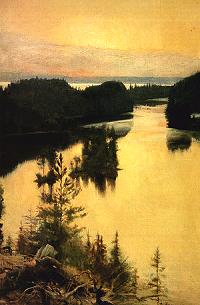 I have never understood why so many commentators have called the original Fifth startlingly different from the final. To me, the feeling of kinship between these “twins” was immediately recognizable. Yes, the technical differences are there, but it doesn’t feel drastic. Rather, you can see the way the original “grew” into the final version. The famous example of this is the original first two movements, which were fused together in the final.

The original first movement, Tempo tranquillo assai, ends abruptly, with a mysterious pause and a sense of mildly playful expectation. The quiet way in which it departs is taken up by the second movement, Allegro commodo, which unobstrusively trickles in. The feeling is that the first movement never left, and the second was always there, unseen. Their combined presence is thus – natural.

Again, the ending of the original is quieter than the grand blaze of brass of the final version. The effect is this: in the former, one is given a glimpse of nature, and one feels awestruck by nature. The final version is more open, full-blooded, bursting – it is the immersion into the glory of nature herself.

The slow movement retains its child-like, pastoral mood in both versions. The primary difference is an alternative sequence of the material. The original is also 200 bars longer, with more frequent use of pizzicato. Let’s highlight the superb Lahti Symphony Orchestra here. The opening horns, their very sensitive timpanist and their achingly rich strings… ah… and their invocation of the subtlest sensations…

The original finale has its surprises too. During the “Swan Hymn”, the woodwind melody that soars above the horns is still in embryonic form. For those familiar with the work, you can only hear tantalizing wisps which tug at the memory. Its beauty remains breathtaking, perhaps even more so because it seems to be struggling in its birth. The themes blossom into the world, struck by the wonder of their own creation. As the orchestra pours into C major, there is a heartwrenching interjection by the trumpet [track 4, 2’34”]. Its brief dissonance is sharp, penetrating deep into the soul, almost twisting in tortured ecstasy. 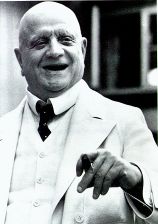 Despite its ethereal floating chords and textures, the magical rushes of quiet wonder, some critics have called the original version “uneventful”, “rhythmically unfocused” and generally less forward in character. To me, these are elements of subtlety, and speak of Sibelius’ ability for economy of expression with maximum effect. The 1915 version is more “innocent”, questing for its final form. Unsatisfied with the original, Sibelius (left) wrote: “I wished to give my symphony another – more human – form. More down-to-earth, more vivid.”

You can hear him struggling with this in the conclusion of the finale. Whereas in the 1919 version, the five concluding chords are interspaced with silence, in the original the first four chords are uttered above a cloudscape of wind and string tremolo. The effect is of experiencing awe in the arms of nature. In the final version, more human and vivid as Sibelius suggests, the composer and symphony stands on its on, proclaiming itself as child of nature, and of nature herself. Hence, within the majesty of nature’s embrace, the “human” celebrates its place in the universe by uttering five existential shouts into the cosmic well of being.

The superb recording and performance aside, the recording of the original Fifth serves as an important reminder to us of the nature of the evolving artist and his dynamic art. If Sibelius’ music is essentially organic in nature, then the opportunity to hear the original Fifth showed me clearly the link between the Fourth and the Fifth. It is almost as if it was meant to be Symphony No.4. It also thus served to remind me of the illusion that differently numbered symphonies are separate entities. In fact, the entire symphonic cycle is a singular Nature in itself.

As for the final 1919 version, what satisfies me about this performance is how unpretentious it is. An example of this is the “Swan Hymn” passage. Whereas some conductors follow the urge to slow down at the C major climax – which is fine to me if they do it well – Vänskä does not. On the contrary, there is a momentary rush as, with the slightest trembling push, the music pours irresistibly into the new key. It is like standing at the ridge of some mountain, eyes closed, feeling the wind rushing by. Suddenly, you open your eyes and behold – the first ray of sunlight piercing past the horizon.

Although the music has always inspired awe, here it exudes a sense of wonder. Throughout, Vänskä’s pacing of the music is wholly natural. It is allowed to breathe, organically shifting to fit the music. To try to describe the musical way he moulds the phrases is pointless – hear it for yourself. The transition between the original first two movements is unnoticeable. As it was meant to be.

The Lahti Symphony Orchestra play with obvious familiarity with the music, as you might expect from a Finnish orchestra. To their credit, there is absolutely no sign of monotony or routineness. Instead, I hear kinship and intelligence. During the quiet, “misterioso” sections of the first and last movement, their empathy with the Nordic sound world is unique. The special colours that the Orchestra has repeatedly demonstrated is audible here.

And what better landscape then the pastoral tranquility of the slow movement, the Andante mosso. It is played with great warmth and feeling… almost a feeling of love. The brief sighing melody is made all the more sweet in this way. These are moments when the music breathes an air of contentedness, something which I think Sibelius sought, having struggled with the Symphony for so long.

Thus, we return to the finale. The conclusion of the 1919 version is in a sense the finale of Sibelius’ five-year struggle. In it is the culmination of not one symphony, but the apotheosis of the “three” Fifth Symphonies: the original 1915, the first revision of 1916 and the final 1919. Here you will hear the fulfilment of “Nature’s Mysticism and Life’s Angst! The Fifth Symphony’s finale-theme: Legato in the trumpets!”

As if following the evolving path of the Symphony, struggling and growing its way into higher form, the Lahti Symphony present the work in a way I can only describe as “natural”. Nothing, breathtakingly nothing, is out of place. Everything – every tree leaf, every mountain rock, every snow crystal, every twinkle of starlight, even the floating clouds – is as it should be. 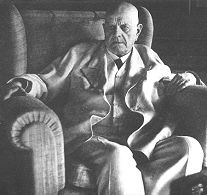 Vänskä spaces out the final five orchestral chords wide, but surprisingly, all five are “pronounced” differently and each makes its point. Anyway, I have increasingly come to appreciate the silent spaces between these chords, no matter their duration. “… [T]he pauses between the notes…[is] where the art resides.” – Artur Schnabel.

Within these spaces is the moment between birth and death. Just as there was a Fourth Symphony and a Fifth Symphony, and a period of “silence” between them, the original Fifth Symphony is – was – the unheard “silence” between them. Similarly, between the seven symphonies of Sibelius, there are “silences”. We can now hear what the silence was between the Fourth and the Fifth – and it is no longer a quiet void. It is the sound of a whole symphony blossoming into being. Within the silences therefore, resides the art of Jean Sibelius.

This recording of the 1915 version of the Fifth is also available coupled with the original version of En Saga (BIS-CD-800). Click here for more details!

A full catalogue of BIS records is now available in Singapore at HMV (The Heeren)! Selected titles are also available at Borders (Wheelock Place).