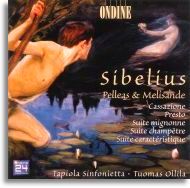 This disc of less-frequently heard works for chamber orchestra are sometimes not considered “serious” – with the exception of the Pelleas music. But hey, that doesn’t mean they are not worth hearing. Indeed, the three chamber suites here are perfect material for the repertoire of any chamber orchestra concert, professional or amateur: all pleasant, light and brilliant, each averaging 5 minutes complete.

The main dish of the album is the Pelleas & Melisande Suite. But before we get to that, let me speak of the others. The BIS album which contains my reference recording of The Bard (CD-384) also contains performances of the three Suites and the Presto. Comparing those 1980s performances by the Gothenburg Symphony Orchestra, and these new ones (recorded in Feb 2000), it is interesting to see how the old has become classic, while the new feel so ‘modern’.

The Tapiola Sinfonietta plays with remarkable sensitivity and precision, readily demonstrated in the performance of the Cassazione, with its whizzing introduction, the melancholy dance figure of the central section (the tune of which later becomes the powerful Ossia movement of The Tempest). The Suite mignonne sees a fairy lightweight reading, quick-footed; maybe not as sweet as the Gothenburg’s, but rather more sleek. The Gothenburg performances have more warmth, the Tapiola Sinfornietta a kind of youthful wit – this difference is clear in mainly the fast movements.

The Sinfonietta is not at all incapable of feeling and darkness of tone, though. You can hear much of this in the Suite champêtre, with its nocturnal Melodie élégiaque, and the impish Danse finale; or in the mild langour of the Suite caractéristique‘s Lento movement. Overall, the point I am getting at is simply that the Gothenburg performances on BIS have always sounded like the work of an experienced master, whereas these newer renditions for Ondine are the brilliant display of a quick-footed – and skilled – youth. Both are good, both are different.

The Presto which comes second on this album was originally the third movement of Sibelius’ String Quartet in B-flat major, op.4. This 1894 arrangement for string orchestra preserves much of its exuberance and brilliance, as the Tapiola Sinfonietta ably shows. Too ably perhaps: the chamber textures are displayed admirably in this performance, but I’m not too sure of the somewhat Paganinian take to the tempo taken. Comparing this to the “version I grew up with”, on BIS (CD-384 again), Ollila has actually taken a full two minutes off Järvi’s 6’41 timing. Matters of speed aside, Ollila’s interpretation remains musical – like much of the rest of the performances here, the Tapiola Sinfonietta is able to exploit its own chamber textural capabilities very well. 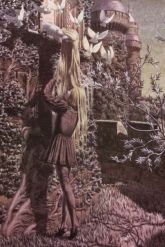 One question that arises then is how the 40-member ensemble will tackle the Pelleas & Melisande music, which has been mostly recorded by larger orchestras. At the Castle Gate, the chamber size does not prevent the Sinfonietta from gathering considerable string weight. Their capacity for high speed precision is put to good use as well – both qualities are demonstrated as well in the Entr’acte. The reading of the brooding At the Seashore is very impressive – dark, with gruesome muted brass, chilling colours.

The pure tone of the musicians make the Pastorale very attractive indeed, with its birdlike flutes and meadowy oboe tunes. This, like the smile-enducing Dance of the Nymphs from The Tempest, is among Sibelius’ most appealing dance pieces for theatre.

The rendition of Melisande is sad and sweet, as is the poignant The Three Blind Sisters. The final piece, The Death of Melisande, is played with fine flow and ample feeling. Indeed, at their very best, the Tapiola Sinfonietta prove to be a very fine ensemble.

Though there are many good points in this recording of Pelleas, I think I still prefer the performance of the complete incidental music by the Lahti team on BIS-918

– that one has the same degree of attention to detail and colour, but sounds rather more “mature”. Which is not to say that the Tapiola Sinfonietta is not mature – it is a very fine orchestra which has proven its mettle many times before.

This Ondine offer’s greatest fault is that it only provides a meagre two pages of notes on the music, unusual for them, but it is otherwise a recommendable disc, especially if you find these works missing from your collection.