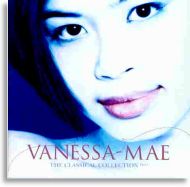 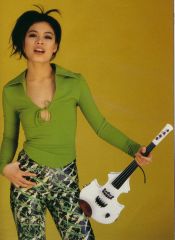 Okay, okay, enough of sneers and nose-peering. Now that a reasonably comprehensive collection of the recordings of classical music’s enfant terrible is out, it’s time for the real acid test. We should, at least, stop the gnashing of teeth whenever Vanessa-Mae’s name is mentioned.

Certainly, her hip-thrusting antics and cavorting in swimsuits have not won her many admirers among the old-school classical orthodox; that is not to say that she does have hordes of fans elsewhere, of course. (And it is always worthwhile to remember that it is the quick-shot profitable albums which pay for the ones that take years to break even.)

This is an interesting collection of her early unreleased recordings, made under an obscure label and licensed by her current label, EMI, for re-release. Among her early publicity materials, much was made of her being the youngest artiste (then) to record the Beethoven concerto, even if the work was never released into the mainstream. Another precocious female ingénue comes to mind whenever “teenager” and “Beethoven” are mentioned in the same context – you know who – and the inevitable, if inconsequential, question will be: how is this going to fare ?

The challenge comes from Beethoven and the Tchaikovsky, of course. Disregarding the third album of potpourri for the moment – vacuous showpieces, perhaps included to attract her fans not of an orthodox classical persuation – let’s start from the front.

“Having a Bit of Fun in the Water”The use of sex to sell art is not a new thing, although it did arrive rather late in classical music marketing. In the doldrums of the late eighties and early nineties, when the market was at a nadir, Orfa Harnoy turned the industry around. Flaunted on the RCA label wearing her cello, eyebrows and hackles were raised, but the cash registers rang all the way to the bank.

For the classical prudish, the use of sex was crass and uncouth – but the market was merely responding to a world of consumerism where flesh and titilation sold, and in great numbers. After all, if simulated intercourse could sell overpriced ice-cream and chewing gum, wither prepubescent performers to a market of new classical audiences ?

At the time, Vanessa-Mae Nicholson was only sixteen, scratching out recordings on an obscure label without (it’s fair to say) much expectations. She performed with provincial orchestras, including a series of travelling engagements with the Singapore Symphony Orchestra on its British tour in 1991. It was not a difficult decision for her to sign on with EMI as their new flagship star after the unanticipated retirement of Nigel Kennedy, then at the height of his popularity.

By 1993, she had dropped her surname – as most EMI artistes recently have – and launched her debut album with a rocked-up Bach fugue. It reached number eleven on the UK pop charts and made beaucoup tons of money. Going on to record Mendelssohn and Bruch to establish her “classical” credentials, the response was lukewarm. Clearly, her audience wanted image, not substance.

The label with the dog and horn – the same one which had made the names of Caruso and Callas, Furtwangler and Karajan, Menuhin and Perlman, acquiesced to demand. She appeared in a wet shirt over a see-through bodyform in the sea, and also in a cropped tube, high-cut hotpants akimbo with a practiced come-on look.

Hardly, as audiences blanched, an aspiring artist with intimations of spirituality, let alone from a label with cultural pedigree. The irony of it was that at the time, their best-selling album of all time had been Jacqueline du Pré’s Elgar, achieved by trial of arms in the open field of music, rather than suggestive flashes of T&A (not that she ever needed it.)

In response, she said that “… a lot of people have said the pictures are raunchy and sexy. But I’m only sixteen and I don’t think that much about sex. If people find me sexy, it’s not my fault.” Her agent certainly did not help matters any by adding that this was “a young girl having a bit of fun in the water with her violin… the top just happened to get wet.”

Today, she still remains one of their top artistes.

The first disc, the Russian Album, contains concertos by Kabelevsky and Tchaikovsky, with the Russian Dance from Swan Lake (as filler) coming in-between. Right off is the Kabelevsky, a little-heard dimunitive work. Not surprisingly, she carries off the technically demanding lines of the outer movements with consummate polish and ease. The cadenza of the finale has virtuosity written all over it, too.

However, the problem here is not with the performer, but with the sound. This is especially obvious in the central slow movement, with the soloist very much buried under the orchestra. This is quite unacceptable, and EMI must have been clutching at straws to have reissued this as it was.

The items from Tchaikovsky are straightforward – she makes the most of a bravura piece in the Russian Dance from Swan Lake with no pretensions, while the violin concerto – largely a self-taught piece, according to her notes – certainly sounds like it. There is little use of rubato or dynamics (usually good for bringing out the expressions of pathos); rather, it turns into a huge exercise in playing the notes from one bar to another from Alpha to Omega.

There is something missing here that would allow the performance to resonate with the listener. This is a pity, because there is clearly audible the makings of an already-impressive prodigy – the nonchalant comparisons to Heifetz or Menuhin in her pre-rocker days does not seem to come amiss when one listens to this. A bit more instruction in technique and interpretation would, one senses, have made a world of difference.

The Viennese Album is laid out along similar lines. There is a saccharine rendition of the Kreisler bon-bons (and sometime Associated Board exam pieces), sounding infectiously sweet, before getting down to business: first, with the quasi-Mozart Casadesus “Adelaide” Violin Concerto – so-called because Marius Casadesus had presented it in Paris 1931 as an “hitherto undiscovered work of Mozart dedicated to Adelaide, daughter of Louis XV”, whereas the truth was less a providence of discovery and more an act of borrowing a brand name to sell one’s one product.

More than any of the other concertos in this collection, Vanessa-Mae finds some degree of empathy with this necessarily light-weight item. She has very clean articulation and rhythmic buoyancy, although there is a slight degree of shrillness to her tone. Nonetheless, this is an easy work which is, above all, effective and contains has some nice touches. A very recommendable item – with just one question, really: why the producers, over preference to real Mozart, chose this work – which has the manner of Mozart but no depth whatsoever.

The Beethoven is another case entirely. Here we are talking about the London Symphony under Kees Bakels with a superb opening tutti, setting the stage for Vanessa-Mae’s glorious ascending octave entry. Throughout Bakels and the LSO follow their young soloist’s lead like a fluther of limpets – no wonder she writes in the notes that “when I first heard in the studio the opening tutti… I was so moved that I almost didn’t want to come in.”

Well, Vanessa-Mae responded with a first-rate performance, fresh and unaffected, with a sheer purity of tone in every register and immaculate phrasing. The second movement is equally magical, with the soloist making emotional contact with the music. In the finale, she brings the work home with vivacious dance-like rhythms, fully supported by Bakels.

The magnetic atmosphere of this session which she talks about on her notes readily comes across on record. People who are waiting to throw stones ought to listen to this: I was half-expecting reservations and found none. If the recording is suspect, with unduly sonorous basses, it is of minor import here, eclipsed by the dynamism of the performance. 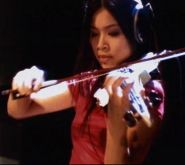 The final disc, the Virtuoso Album, is somewhat of a mixed hamper containing her favourite pieces inspired by classics, cinema, folk and pop culture. While Vanessa-Mae is having unashamedly fun with the fiendishly challenging Sarasate “Carmen” Concert Fantasy and the Wienawski Fantasie brillante on Gounod’s “Faust”.

But the other items perhaps may raise an eyebrow or two: rather vamped-up arpeggios and showoffy arrangements in Frere Jacques and Figaro (an effort by the pedagogue Castelnuovo-Tedesco and Heifetz after the famous barber’s aria), mixed with syrupy renditions of theme from The Umbrellas of Cherbourg (here lacking any sense of romance whatsoever) and Gershwin’s Summertime.

One may be well entitled to ask: after the Casadesus and Beethoven, why one would need a hair-curling rendition of Pink Panther and Yellow Submarine to establish her virtuoso credentials is puzzlement – let alone butcher some very nice, classic tunes.

Nonetheless, apart from some insipid arrangements, some of them by the youthful Vanessa-Mae herself, no harm done. One gets the impression that Vanessa-Mae, not yet into her teens at the time of recording, is being pushed too hard – way too hard – by her producers to play to as wide a crowd as possible, to win an audience and make her name.

While the orchestral accompaniments – under Anthony Inglis, Nicholas Cleobury and Kees Bakels, all fine conductors in their own right – are sympathetic and noble, the pass-or-fail of this collection rests squarely on Vanessa-Mae’s, ah-, execution of these works.

Conclusions ? A mix of the heavy and the light, all carefully picked and groomed to show off a little twelve-year-old prodigy. No further comments, then, on the selection of repertoire, except that this is not an easy depth at which to jump in. While clearly she excelled in the pieces which she was groomed, the others came off less successfully: a narrow fail for the Russian Album and a pass with merit for the Viennese.

As history records, following these recordings, which were not released into general distribution, as well as the lukewarm reception of the Bruch-Mendelssohn album (which was heavily promoted), she sharply switched tracks into quasi-classical pop stardom.

Looking back with 20/20 vision, this is perhaps not the litmus-test of Vanessa-Mae the prodigy, as much as a glimpse as to what could have been if her agents had been less hungry for her to achieve overnight fame and turned her onto a prodigal path. What we see here is the change after paying the price of fame.

Benjamin, as he would henceforth like to be known, is due to sign a recording contract any day now to perform the complete bagpipe sonatas of Mrs Gütrune Olégünnarsdöttir and her son Rudi.

www.vanessamae.com?
Of course it exists!

Vanessa-Mae – The Best Violin Player
Er, OK, if you say so.

Vanessa-Mae – World’s Best Violin Player.
Oh yeah! Who are we to judge, right?