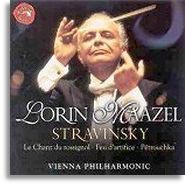 There is a famous story of the one time Sergei Rachmaninov and Igor Stravinsky had dinner together. Both men lived in Beverly Hills, California, not far from one another, but disliked each other immensely. The atmosphere that night remained charged until Stravinsky commented about Rachmaninov’s Prelude in C sharp minor, on which its composer received no royalties despite its immense popularity.

Rachmaninov countered by mentioning the three early ballets Stravinsky had written for the Ballets Russe – The Firebird, Pétrouchka and Le Sacre du Printemps – for which Stravinsky had received no residual monies. That finally broke the ice, with the two composers gleefully comparing how much they would have made had their respective works fallen under international copyright laws.

Copyright, and the possibility of finally earning some residual income from those three very popular scores, was a strong motivation for Stravinsky to revise these works in the 1940s. He also wanted to make them more accessible to smaller orchestral forces, add genuine second thoughts, and correct what he considered errors of youth and inexperience.

Stravinsky had particularly wanted to revise Pétrouchka for some time, and did so extensively. He not only reduced the orchestra but also changed meters, slowed tempi, simplified rhythms, changed harmonic passages into contrapuntal ones and expanded the piano part. In short, he made Pétrouchka a much leaner and meaner composition, more in keeping with the edgy neo-classical Stravinsky of 1947 than the impressionistic one of 1911.

Left: Stravinsky in 1911, with Nijinsky as Pétrouchka.

Many conductors today use the revised Pétrouchka, but the opulence of the original more fully portrays an aura of fantasy – the aural equivalent of looking at brightly colored Russian lacquer boxes, with their illustrations of fairy tales and winter scenes – which makes this recording all the more fascinating.

Lorin Maazel’s conducting is not a disappointment by any stretch of the imagination. After his early recordings showed considerable promise, many of his interpretations in the 1980s and 90s seemed lackluster. More lately, however, Maazel’s music-making has come into a second bloom, with the sparkle of his early years grafted onto tempi that are relaxed but by no means dragged-out or dull.

From the opening notes, there is a joy in the music and a strong sense of fantasy and in the scenes it depicts. While Maazel does not overdramatize anything, he mines quite a few more touches of character than most conductors in this score, and through his measured pacing gives us more time to appreciate and savor them.

All the wide-eyed wonder of the First Tableau is present, along with a thoroughly rustic quality that fits the scene flawlessly. The scenes in Pétrouchka’s and the Moor’s rooms show the puppets to be children – innocent, sensitive and bad-tempered in short order – which makes Pétrouchka’s death in the Fourth Tableau all the more chilling when it occurs. The details in these two middle tableaux, especially the Third, bring Pétrouchka, the Moor and the Ballerina to life so completely that I can not only see and hear them, but almost touch them as well.

Nor does this almost tactile scene-setting end with the characters. For once, I can hear children running through the Fair in the Fourth Tableau, listen to people chattering and actually become excited with the crowd and the sights. The bear is terrifying – a foreshadowment to what happens between Pétrouchka and the Moor shortly afterwards – but once he is gone, the joy and excitement return. When the Moor chases Pétrouchka, sword in hand – not spotlighted but unfolding within the rest of the music, as though you notice it amidst everything else going on – the sheer fright of the spectacle itself and the crowd’s realization that this should not be happening if these puppets are not alive is almost palpable.

Even with the large orchestral forces demanded in this score, there is a transparency to the playing and recorded sound that allows us to hear everything. And there is quite a lot going on. Maazel encourages the players to articulate the notes cleanly, pointing up the rhythms while never sacrificing the sense of line and blending the orchestral colors into one whole fabric. No one color or texture stands out, but exist as part of the complete picture. Even the snare drum which plays between tableau is set back further than usual – an interesting touch.

A further bonus is the Vienna Philharmonic, never sounding better in music one would normally not associate with it. How much Maazel has encouraged them or they have encouraged him is possibly open to debate (the Vienna Philharmonic has the uncanny knack of bringing out the best in the conductors with whom it plays), but in any case, the result, as in Maazel’s recent Debussy and Ravel discs with the orchestra, is outstanding. 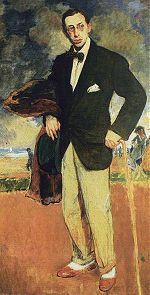 Maazel and the VPO acquit themselves equally well in Le Chant du rossignol (“The Song of the Nightingale”), the symphonic chinoserie that Stravinsky cobbled together from his opera Le Rossignol for the Ballets Russe in 1917. The director, Sergei Diaghilev, requested that the composer rewrite the opera in the form of a ballet, and gave detailed instructions for the adaptation. Stravinsky fulfilled the request, and the Ballets Russe premiered Le Chant in 1920. The work has since been more popular as a concert piece but is not programmed as frequently as The Firebird, Pétrouchka or Le Sacre du Printemps.

Based on a fairy tale by Hans Christian Anderson, Le Chant closely follows the second and third acts of the opera. Courtiers hurriedly decorate the Emperor of China’s palace in anticipation of the Nightingale’s song. A “Chinese March” announces the ceremonial entrance of the Emperor. The Nightingale sings, and the crowd expresses its approval.

The song has barely died away when a courtier presents a gift from the Emperor of Japan – a mechanical nightingale, which can sing at the regent’s beck and call. However, the mechanical bird’s song is a pale imitation of the real thing, and the Emperor angrily dismisses the gift, a muted trumpet portraying his pique.

In the final part of the drama, the Emperor lies ill as Death hovers nearby, ready to escort him away. The Nightingale arrives unexpectedly, charming Death with its song and saving the Emperor. The courtiers, expecting to find the Emperor dead, are stunned to find him greeting them when they arrive the next morning.

While not exhibiting the coiled-spring intensity of Fritz Reiner’s performance with the Chicago Symphony (RCA 68168, with Rimsky-Korsakov’s Scheherazade – mid-price), Maazel and the VPO fully capture the score’s exoticism and wit. Where Reiner gives a more acerbic, post-Sacre reading to the score, Maazel tackles the work from an impressionistic, pre-Sacre vantage point. Both views work equally well.

For once, the early sections of this work come off with considerable tongue in cheek – not a quality normally associated with Stravinsky – with those servants in the opening Presto genteelly almost running one another down as they make sure every piece of furniture shines and every cushion is straightened. And restraightened. And straightened some more. The Chinese March lurches from pomp and pomposity, and while the Nightingale’s song, played by the flute at the beginning of track seven, is very sensitively done, the poor mechanical nightingale not only sounds stilted, but – dare I say it – just a little rusty in the gearbox.

Maazel is also perceptive of the darker tone the score takes later on. The low brass and winds give the deathbed scene a thoroughly malevolent air, and the rest of the scene up to the Nightingale’s appearance plays like Le Sacre’s evil twin. Even when the Nightengale appears, the tension does not abate until the Emperor sleeps peacefully near the end of the movement. Altogether, while this score is generally not as fulfilling as Pétrouchka, Maazel and the VPO make as good a case for it as anyone probably could, and show how rounded and interesting it can be when in the right hands.

At the end of this disc, played as an encore, is Feu d’artifice (“Fireworks”), the short orchestral score Stravinsky wrote for his teacher, Nikolai Rimsky-Korsakov, to celebrate the wedding of the elder composer’s daughter. (Unfortunately, Rimsky-Korsakov did not live to see or hear the score.) Sergei Diaghilev was in the audience when the piece was performed in St. Petersburg, and was impressed enough to compose music for the Ballets Russe. The rest, as they say, is history.

JONATHAN YUNGKANS does not mind fireworks or nightingales, but he watches out for those clowns.