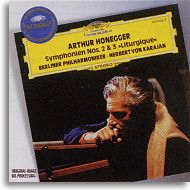 Western Art Music in the 1940s, some would testify, bore the marks of the effects brought about by the events surrounding and arising out of World War II: virtually no one was left unaffected psychologically and/or spiritually (even physically); and many composers took to pouring out their grief in cathartic souvenirs of musical creation.

Arthur Honegger(1892-1955) was a composer who sought inspiration for his music from the events which surrounded him; and was vocal in his rejection of “art for art’s sake”. During the time of technology’s infancy, he conceived Pacific 231 a thundering portrait of trans-American locomotion; and followed this with Rugby a violent sound-picture of sportive frenzy, which was performed during an England-France international match.

With his 1931 First Symphony written for the Boston Symphony Orchestra, Honegger recanted from his untypical, Socialist-Realist “machine-music”; and a decade later composed his Second Symphony for string orchestra and trumpet to a commission by his friend and patron, Paul Sacher. This was clearly the product of an intense reaction to the Second World War, whose shadows loomed large over the sensitive composer.

The work contains aspects of mourning and consolation which one associates with the loss one experiences at war; and is fashioned by the composer’s lifelong devotion to Bach so evident in the final movement’s employment of a chorale-like cantus firmus. In the opening movement, a haunting, dirge-like lament built on three notes forms the “germ” of the music. This motif is first heard repeatedly on the violas, before it is suddenly transformed into an energetic, pulsating subject. The thematic ideas are reworked in the middle movement (Adagio mesto), where the fervent solemnity is increased by a sustained, tenuto quality in the strings. Motoric, accompanying rhythms urge the final movement on to an exciting finish, where soaring violins and a trumpet intone a Bach-ian chorale at its climax.

Honegger’s religious convictions and utter dismay at the trail of destruction left behind by the war are further cemented in his Third Symphony, subtitled “Liturgique”, which was written in 1945-1946. In contrast to its predecessor, the composer calls for enlarged orchestral forces in this work: triple woodwind, 4 horns, piano, percussion, strings, etc.; and its tripartite structure, albeit conforming with the latter, ends with a solemn funeral march.

“Judgement Day”, the symphony’s first movement, opens with nervous energy in rasping string figures which decorate menacing brass-calls: the composer’s penchant for kinetic, Stravinsky-ian rhythms in clear evidence nonetheless. The upward-sweep in the opening motif characterises much of the music, heard frequently in the lower strings. Imaginative writing for the controlled ensemble-forces proves Honegger’s remarkable compositional skill: fanfare-figures in the trumpets, chromatic-runs in the woodwind, driving string-rhythms all contribute to its discernible characteristics. An economy of material is achieved without a loss in effect on the contrary, his expert combination of preconceived, acutely developed ideas are meshed in such cohesive unity that calls to mind the restraint of the Classical masters.

A sea of lush textural polyphony ushers in “De profundis clamavi”: beginning quietly solo instruments religiously declaiming an endless melody amidst a backdrop of hushed strings it builds to a grandiose peak before gradually subsiding into prayerful contemplation on a single flute: the timbres evoked call to mind Bach in his Organ-splendour. A sinister march-rhythm sets the pace in the final movement; and a horn-motif derived from it signals foreboding terror. As the music crescendos to feverish intensity it returns in ominous turns on various instruments. After a blistering climax, a meditative Adagio for strings and wind bestows a glimpse of peace.

Igor Stravinsky certainly exerted a strong influence on his Swiss colleague. Honegger himself did a treatise on the elder Russian’s work in 1939; and was deeply fond of the latter’s frequent use of motoric rhythms and neo-classical idioms. It was Paul Sacher again, who commissioned from Stravinsky in 1946 his Concerto in D for strings. The baroque Concerto form thus provides the starting point, and the tripartite structure (fast-slow-fast) is reportedly the composer’s ideal in string music.

Its first movement, Vivace, alternates from high-spirited humour to sedate nostalgia: pointed, “off-the-beat” rhythms propel the light-hearted main theme which flanks a lazy, mock-Gallic waltz. The Arioso, andantino middle-movement sings a long, lanky tune of moonlit nights and forgotten memories; which all but suddenly filters into the rumbled beginnings of the Rondo third movement: which juxtaposes its main sections of half-chiselled melodies amidst mysterious, buzzing tremolandi; with elegant, dance-like episodes. A gem of a souvenir, this one! 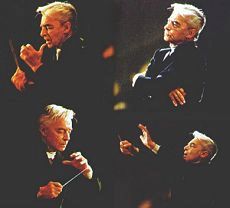 It was often said about Karajan, that what set him apart from other maestros was his inimitable ability to turn even the most second-rate of music into inevitable masterpieces. Whether or not one chooses to apply that sentiment to the present disc largely depends on one’s sympathy with the craftmanship of Arthur Honegger; nevertheless, upon hearing this cherishable collection one would have no doubts as to the validity of New York Times’ Critic Harold Schonberg’s statement, that the Berlin Philharmonic and Herbert von Karajan were “one of the best assembled ensembles anywhere in musical history”.

In the Honegger pieces alone, we witness Karajan’s mastery of the composer’s highly personal idiom. The opening of the Second Symphony is infused with such a mesmeric quality one really wonders if one has not succumbed to hypnosis. The timbre of the Berlin-strings is unbelievably lush; even in the more aggressive passages where pulsating rhythms and running-notes run alongside each other.

The sudden transition into the Allegro is done with utmost finesse and confidence; and strings especially the ‘cellos sing with full-bodied grace, when not pounding agitatedly in unison. The tense atmosphere in the slow movement is so magnificently sustained, where the aching melodies flow uninhibitedly into one another in long, fluid phrases – helped all the more by the polished sound of the Berlin-strings. A steady pulse is determinedly maintained throughout the final movement, thereby allowing the melody to unfold decidedly along its rhythmic parameters; before adrenalin accumulates to breaking point in the final bars with the victorious strains of the Bach-ian chorale tune.

Even more impressive is the abrupt opening of the Third Symphony, where the sudden crescendo following the upward sweep of the lower strings give way to menacing brass interjections and splintering trumpet stutters: the Berliners pull it off with gusto and not without a certain amount of dramatics! Elsewhere, incisive string-playing, masterful woodwinds (thrill to those descending chromatic-scales and the unbelievably steady sustained trills in the Development section) and powerhouse brasses (that slam, wham and horns that blister with nervous energy) complete Honegger’s terrifying vision of Judegement Day. And what a joy it is to behold that Karajan is so capable of gentle affection, of which he evinces in the soothing tranquility of the second movement: an endless tone-painting of quiet, still landscapes brushed with careful, rounded strokes.

The sinister element is certainly not lacking in the Berliners’ comprehension of the final movement: it pervades their articulation of every phrase, and is seemingly infectious as all players respond to the general air of intense horror: at the climax, the build-up in ferocity bursts at its seams as the brasses swell to contusion. What is truly evident after several listenings, is that the Berlin Philharmonic then was undoubtedly a gathering of the best chamber-music players in the world: it is so remarkable how they listen and respond so intently to one another, that unity in conception becomes merely a superfluous byword.

This chamber-playing quality serves to magnificent effect Stravinsky’s jewel for string-orchestra: hear how the violins utter with suppressed jest the theme of the first section, before languishing into drunken laziness for the middle subject. How elegantly, too, they caress the second movement’s seductive splendours; before giving us an edge-of-the-seat rendition of the scampering Rondo chock-full of playful nuances. Believe me: it can’t get better than this!