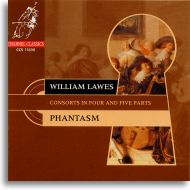 Viol Consort music is, like countertenor music, a sort of an acquired taste. That doesn’t mean I have trouble appreciating either of these. In fact, I love them.

Viol music is definitely of a different class of soundworld and evocation compared to any sort of ‘modern string’ ensemble music – this sounds like “violin” music, but it isn’t. The viol has a much more rougher (or, as I would prefer to say, “pungent”) tone, more rugged, more penetratingly frank, even more rustic, coarse sound. It is precisely this tone, which when combined together in the form of a small ensemble (consort) of instruments, creates a terrifically unique voice which is familiar yet unfamiliar.

William Lawes (1602-1645; period before Purcell) is one of the most important key figures in the music of England. He was one of the personal musicians at the court of King Charles I, and died at an early age during the English Civil War (1642-51). He left behind many songs, madrigals and of course music for string consort.

By and large, viol consort music is not to be taken in large doses. Find yourself a sunny quiet afternoon or evening, and put this on. Viol consort music, with its explicit division of ‘parts’ is the kind of stringwork which calls for each individual player to weave and intertwine among each other’s lines. That layering is part of its aural appeal.

The pieces here can be loosely described as collections of fantasias (fantazies), airs (aires) and pavanes. Speaking of pavanes, the viol has a pretty melancholic sound – the combination of a fivesome of these ancestors of modern bowed strings is very…. pungent indeed. Sometimes fragrant, like layers of perfume wafting in the air, at other times vibrant, reflective, hypnotic.

Listening to viol music can be tiring if the consort does not vary their colour. Thankfully, the skilled players of Phantasm and their guest (Cunningham) provide ample deviation in their tonal range, aided by Channel’s very clean and natural recording.

I greatly enjoyed their fair, medium (not too rare, not too overcooked) sound. They don’t exactly have the smoothest sound, but I must add that the smoothest sound would not be appropriate for this music. There needs to be just a tinge of bitter coarseness, even a sort of piquant sourishness, to make the viol a viol. By and large, I enjoyed the thoughtful canvas of fantasia, lovely (or melancholic) stretches of pavane, the light dance steps or wordless song of the airs, and especially some of the very refined touches displayed during very light passages.

As usual with Channel Classics, the essay included in the liner notes by the performer(s) is of unique and tremendous influence. Laurence Dreyfus, leader of Phantasm, writes of his one summer afternoon in 1975, “jamming” with some eminent Lawesians in Cambridge, and adds:

To make sense of Lawes… one has to crack his code. This means succumbing to his genial deviousness whilst also taking the time to characterize a range of feelings unique to him. … Any viol player will tell you that the sensation of weaving in and out of Lawes’ elaborate embroidery is quite unlike any other one can think of. But even for listeners confronted with the whole fabric, Lawes offers unparalleled pleasures.

Chia Han-Leon also recommends reading Shakespeare while you are listening to this sort of music.