Brahms seems to be pleased by his connection with me; and as an artist and a man I am so overcome by his kindness that I cannot help but love him. What a warm heart and great spirit there is in that man! You know how detached he is from even his closest friends, at least where his compositions are concerned, and yet he has not been like that to me.
Antonin Dvorak to Fritz Simrock

Of all Johannes Brahms’s friendships, his relationship with Antonin Dvorak was uniquely placid, lasting without a rift until Brahms’s death in 1897. Brahms became a fervent supporter of the young Czech’s work after serving as a jury member for the Austrian State Prize, for which Dvorak applied between 1875 and 1877. He recommended Dvorak’s compositions to his publisher, Fritz Simrock, to the violinist Joseph Joachim and to several established European conductors. 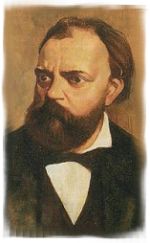 Dvorak (right) treasured Brahms’s friendship for the rest of his life. He was especially overwhelmed when Brahms voluntarily corrected Dvorak’s proofs for Simrock while Dvorak was away in the United States. “In the whole world I do not think I could find another musician who would do the same,” Dvorak wrote, and as tedious and time-consuming a job as proofing is, he was probably right. Brahms’s death may have even been a contributing factor to Dvorak’s remaining in Europe instead of returning to the United States.

It was only natural, then, that Dvorak’s work showed some influence of the Viennese master. His Sixth Symphony, written one year after Brahms’s Second Symphony, is as much a Pastorale as Brahms’s work. It shares the same key as the Brahms Second, as well as a genial, bucolic charm that is extremely hard to resist. Other features, such as the time signature of the opening movement, an early modulation from D major to E minor, and a similar use of syncopation, also appear in the Brahms, though the overflowing wealth of melody throughout the work, and the overwhelming energy in the scherzo and in parts of the outer movements, are purely Dvorak’s own.

Like his series of symphonies by Carl Nielson that he recorded for BIS (and sadly never finished), Myung-Whun Chung’s new recording displays a freshness and exuberance that is almost infectious. He matches the Sixth Symphony’s high spirits from its opening bars, along with a sense of wide-eyed wonder that fits the symphony to a tee. His speeds are faster than Jiri Belohlavek and the Czech Philharmonic (Chandos 9170), but the quicker tempos work to the symphony’s benefit. For all this work’s charm, Dvorak really did not hit his stride until his next symphony, and there are several places that can seem superfluous if taken at too slack a pace.

At Chung’s pace, the Allegro holds together better structurally than in nearly every other recording I have heard. He allows the Adagio to sing, even though he is nearly a minute faster than Belohlavek; although the pace is quicker, there is a naturalness to the phrasing that is quite compelling. Granted, the Scherzo and parts of the Finale could have benefited from a slightly less breathless pace, and gained in tonal weight as a result – and since the Scherzo is a Furiant, a more rustic quality that could have come from a slight slowing would have been appropriate – but the general fleetness only adds to the excitement.

The Eighth Symphony is almost as idyllic a work as the Sixth, and shows how much Dvorak had grown as a composer in the intervening years. It is much more loosely constructed than the Sixth, most notably in the opening Allegro, but it is also much better made. There is still a Brahmsian influence, most notably in the Allegretto grazioso – a wistful intermezzo not far removed from the one in Brahms’s Third Symphony, but with a lilting tunefulness that only Dvorak could have supplied. However, the tread of Brahms’s footsteps follows much lighter on the heels of this symphony than they did behind the Sixth.

The Eighth forms a lyric interlude between the tragedy of the Seventh and the grandeur of the “New World,” and is by far the most cheerful and spontaneous-sounding of Dvorak’s late symphonies. It is also probably the most difficult to pull off. A gentle piece, but not without its dramatic moments, it loses immeasurably when driven too hard, and too subtle an approach can be almost as deadly.

Chung’s performance of the Eighth walks a magic line between these two extremes. He is propulsive where needed, yet gives the lyric episodes their due. Just as in the Sixth, there is nothing contrived about this performance; it is not only natural, but also full of life and enchantment. With conducting this perceptive and assured, and the warm, golden sound of the Vienna Philharmonic playing at its best, this is probably the finest Dvorak disc to be released in years.