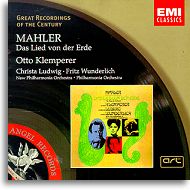 Includes libretto in German with translations.

It is quite hard to objectively review reissues of legendary classical performances, since one would have known (or heard of) all of their virtues beforehand. It is thus the case with this particular CD. A great conductor who has a deep understanding of Mahler’s works, an outstanding orchestra of its day, and a pair of wonderful soloists are what it features.

As the liner note kindly tells us, the recording was not done in a single “go”. It took about 29 months to finish it. Moreover, during the recording, the orchestra had to be changed due to its disbandment (by its founder). Such were the conditions this performance had to endure. However, like people always say, “no pain no gain” – the result is something truly amazing.

From the first notes we can feel that it is going to be a great performance. The opening passage, played elegantly yet powerfully, sounds so great that it does not betray its recording age. By the time the soloist enters, you will encounter one of the greatest tenors who’ve ever recorded this. While it is true that the boldness of Fritz Wunderlich’s voice is a great asset, it is his interpretation that is really outstanding.

The desperate and sorrowful man, ready to drink to forget his sadness, is perfectly captured by him. Listen to how outstanding he utters the passages “Dunkel ist das Leben, ist der Tod” (“Dark is life, dark is death”) which close every part of the poem, as if there is no future at all. He also sings the most important line in this movement, “Du aber, Mensch, wie lang lebst denn du?” (“But thou, O man, how long dost thou live?”), with great irony, which makes one truly ponder the words.

The second movement, ‘The lonely one in autumn’, is perfectly described by the dark and cold tone of the orchestra. Christa Ludwig sings beautifully and emotionally here, although not as expressive as Janet Baker (in the 1970s recording with Bernard Haitink – reviewed next issue) does. However, Ludwig portrays vividly the sad woman who desperately needs comfort.

The third movement is played more slowly than usual. However, this approach seems to work well. The chinoiserie details are strongly felt. The slow approach also makes Fritz Wunderlich sing with greater detail, and as the result, his description of a group of scholars enjoying themselves in green and white pavilion is so real. 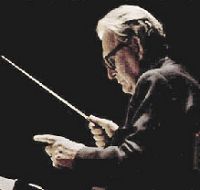 Klemperer (right) once again takes a slow approach for the next song. This works quite well in the first part about young girls picking flowers. Like before, the chinoiserie details and the description of the text are so vividly real. However, the slowness of the stormy middle section indicates the low point of this performance.

This section tells about young men riding wild horses, and the orchestra seems to represent the horses. The slowness weighs down on this merry episode tremendously, to the detriment of the orchestra’s ‘function’. Although Ludwig sings lightly here, she cannot help this part from becoming rather dull and unexciting. When the last part (about the girls) begins, the contrast, which is supposed to differentiate the men’s part from the girls’ parts, is not felt. Sadly to say, this is the most unsatisfying movement of the whole great performance.

The fifth song also suffers from slowness. However, this movement is greatly helped by the devil-may-care approach of Wunderlich. It makes his portrayal of the drunken man quite convincing (although that drunken man is actually not too drunk to utter his words perfectly). The slow tempo also reveals the clear details of the orchestra, which plays beautifully, especially when the violins represent the bird singing and answering the man’s question.

The last movement is one of the highlights of this performance. Ludwig sings beautifully here, matching the orchestra’s magnificent playing. The many chamber textures are caught vividly. You can almost hear every single instrument of the orchestra. Listen to how beautiful the “duet” between the soloist and the flute is. Ludwig’s description of someone waiting for her friend to say goodbye is also highly imaginative. Furthermore, the closing scenes are truly expressive.

It is interesting to note that Ludwig takes a quite different approach in singing the repeated “ewig” than Janet Baker. While Baker decreasings the volume of her voice for every ewig – to the point of a whisper, Ludwig emphasizes every one while doing the decrescendo, as if to insist that the nature indeed will always be green and blue again.

On the whole, this is indeed one of the best recordings of Das Lied von der Erde, one which truly deserves its legendary status. However, it is a pity that Klemperer takes the slow approach for third, fourth, and fifth movements, which I am sure will not please everyone. This approach does make the work more a song-cycle than a symphony. Nevertheless, in this performance, it is a unified song-cycle.

For me, my main reservation is the fourth movement, or more particularly, its middle section. This aside, you’ll find a perfect match of almost everything. Fritz Wunderlich is perfect in his rendition, Christa Ludwig not far behind; although I do prefer Janet Baker’s version which I find more expressive. However, Ludwig is a close second. On top of that, there is the interpretation by Klemperer and the superb playing of the orchestra. The new remaster enhances the album’s value, and secures this CD’s “desert island disc” status .

As his journey to the wonderful world of exotic classical music continues, Michael Anthonio wonders what he should listen to (and review) next.