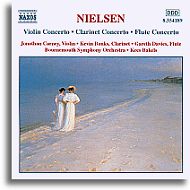 The Nielsen concerti are a unique bunch, neither exactly very popular nor ignorable – Nielsen (below right) wrote of his Violin Concerto: “[it was to be] popular and showy without being superficial”. It is quite evident how Nielsen’s intention fits into the style of the music: it can be hard to say that it is (entirely) melodic, but at the same time, one can hardly call this unapproachable.

The soloists in this convenient package are all principals from the very fine Bournemouth Symphony Orchestra, at some time or another (the flutist left in 1999).

The upbeat Violin Concerto was written in 1911 enjoys a sensitively formed reading. Soloist Jonathan Carvey’s fine articulation gives rise to a thoughtful interpretation which bears repeated listening. His keen and refined playing of the solo is very impressive, showing much concentration of phrasing, exploiting the dynamic and individual effects of the music most admirably. The accompaniment provided by Bakels and the Bournemouth orchestra completes the excellent performance.

Faults are minor, none which I attribute to the music-making itself – there are some wide dynamic contrasts in the recording, between solo violin and orchestra – so watch your volume dial. Other than this, the Naxos production has misleadingly tracked the two-movement work into three tracks, ostensibly, with the “slow movement” in the middle flanked by the two fast ones!

The performance of the Flute Concerto is lightweight but serious. Gareth Davies gives a lively and expert reading, which is more fleet-footed than my comparison recording on EMI Forte (CZS5 69758-2). The latter, with flutist Frantz Lemmser and the Danish Radio Symphony, gives a more fluid interpretation, much more sweeter in character. The Naxos offering is much more impish, crackling – darker.

I must confess, even as a former clarinettist myself, to not being very appreciative of the Nielsen Clarinet Concerto – its appeal generally eludes me. Having said that, giving this CD several run throughs has had its positive effect on me. Written in 1928 on the request of the composer’s friend Carl Johan Michaelsen, it was meant to be played by the Copenhagen Wind Quintet’s clarinettist, Aage Oxenvard.

This schizo-frenetic, sometimes enigmatic, sometimes noisy work is given a very jagged and sometimes rough reading – which are in fact qualities of this icy, rock-hewn work. Oxenvard points out that Nielsen must have been able to play the instrument himself, since he could find all the hardest notes to play! Nielsen’s son-in-law, Emil Telmányi, who conducted the premiere, called this “music from another planet”. I cannot disagree.

Nevertheless, there are passages featuring sensitive attention to the score, and the commitment and energy is admirable. The obligatory alien environment is paid full tribute with some evocative landscape painting from the soloist, plus picturesque(?) tone-painting from the orchestra – woodwinds, percussion (the all-important snare), and all. However, I find the EMI Forte version slightly more coherent and unified, but this Naxos collection remains recommendable – if you don’t mind Nielsen’s very unique style with these instruments.

A useful collection for Scandi-fans and miscellaneous concerto fans. Nielsen collectors will find it more worth it to pay a bit more for the Forte collection.

Bibliography/List of References:
1. MOORE, Stephen. Liner note of the disc.

You can buy or order this CD in Singapore from Sing Discs (Raffles City), HMV, Tower and Borders.