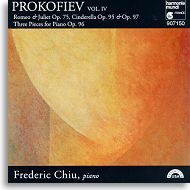 Now that Frederic Chiu has recorded the complete piano sonatas of Prokofiev, he has branched out to include other piano pieces and even the violin sonatas with violinist Pierre Amoyal. I have not heard his first two discs of piano pieces, but if they are anything like this collection of transcriptions, they must be an utter delight. 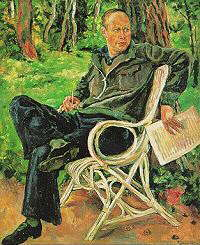 In the few excerpts I had heard from the sonatas, Chiu’s technique has shown to be more than up to the level of Prokofiev’s piano writing. His phrasing, however, seemed a shade too cautious, too self-consciously perfect, for me to fully enjoy his music making. What was missing was abandon, the wildness and explosive quality that is second nature to much of Prokofiev’s music. Even in his lyrical works, there is disquiet under the surface, an unease that threatens to erupt volcanically at any time. Whether it is the quiet innocence of a love scene or riotous gaiety, tragedy can strike anywhere in Prokofiev’s music – and often does.

This time, Chiu throws caution to the winds. The result is some of the best Prokofiev he has given us. He flings down the gauntlet with the March From The Love of Three Oranges. Prokofiev transcribed this excerpt as a concert piece for his recitals in America after the opera was successfully premiered in Chicago.

Starting quietly and steadily building tension, Chiu balances the spikiness of the piano writing with the jauntiness of the theme, and brings the piece to a swaggering conclusion. The Scherzo that follows, also from the opera, has an insouciance that dovetails with the end of the March. Chiu captures its sense of fantasy perfectly while keeping us off-guard with the deftness and precision of his left-hand figurations. He plays up dissonances without over-emphasizing them. Unlike many pianists, he uses them to spice up the dish he is preparing, not as the main course.

But Chiu comes into full interpretive flower with the Six Pieces From Cinderella. Whether it is the coquettishness of the opening Allegretto, the budding passion and implicit danger in the Allegro espressivo, or the tenderness and wonder of the Moderato dolce, he allows himself to soar with Prokofiev’s flights of imagination.

He tastefully uses rubato in the waltzes, and employs an extraordinarily full palette of tone colors to paint every scene. Although this is supposed to be a piano reduction, I never missed the orchestra. Neither do I remember hearing this music played before with such suppleness and limpid phrasing.

Chiu also gives full play to Prokofiev’s sense of humor in these pieces. This is especially true in the second Allegretto, where the dissonances and left-hand passages come off with a tripping, skipping gait, perfectly illustrate the unbridled joy of a girl home from the dance with a crush on some boy. Humorous? Yes, in a slightly goofy and very touching sort of way. Just think back to when you were a teenager. That’s exactly what Chiu is doing here. You can’t convincingly play like you are having fun unless you are actually enjoying yourself, and Chiu is having an extremely good time. There is not so much as a hint of self-consciousness, nor could there be for him to pull off this music as absolutely as he does here.

The Divertissement that comes after the Cinderella pieces is a more serious work, but no less evocative. Prokofiev adapted the first and third movements in 1929 from a short ballet he wrote entitled Trapeze, based on a circus theme. He then added the lilting second movement, a piece which foreshadows the lyric moments in Romeo and Juliet, and ended the work with music intended for his ballet The Prodigal Son, a piece on which he was then laboring.

There is a Stravinskian quality to the Divertissement, especially the two movements from Trapeze, which sound like Petrushka sifted through the harmonically more astringent sensibilities of Prokofiev’s earlier ballets, Chout and Pas d’Acier. Like the original version of the Fourth Symphony, which dates from the same period, the Divertissement does not hold together well as a complete entity, but it is nonetheless a fascinating composition.

Chiu (left) is unsparing in the fierceness of his attacks in the first movement, but he is not so brutal as to overwhelm the music. At his tempo, he loses some of the Russian folk song qualities in the movement’s themes compared to Neeme Järvi and the Scottish National Orchestra in the orchestral version (Chandos 8728), but makes up for it with a melting reading of the second movement.

Tension flags a little over a minute into the third movement and does not quite recover. To be fair, this is extraordinarily difficult music for one player to sustain, with a lot of heavy chordal writing and stamping rhythms to put across in a fairly short period of time – the marking for this movement is Allegro energetico. Here, Järvi has an easier time, as this movement benefits from having more players share the work.

The fourth movement fares much better. Chiu’s approach is lighter and sprightlier than Järvi’s, articulating the dance rhythms in the first theme with remarkable clarity and panache. He pulls back on the tempo at 1:26, emphasizing the lyricism of the second theme and showing it a close cousin of the second movement – thus rounding off the work more completely and satisfactorily than Järvi and the Scottish players.

The three transcriptions that follow – of the Gavotte from Prokofiev’s incidental music to Hamlet, along with an organ fugue by Buxtehude and an offbeat arrangement of Schubert waltzes that Prokofiev prepared for his own concert use – are minor but serve as a welcome breather after the density of the Divertissement.

The final piece on the program, Chiu’s own arrangement of four movements from Lieutenant Kije, offers some of the most riveting playing on this disc. Here the Russian-ness of this piece is thoroughly expressed (and make no mistake, this is a very Russian piece), and Chiu has the full measure of this work’s scathing wit.

When Kije’s theme appears at 1:25 of the marriage tableau, we are taken for a rip-roaring time down the aisle. The troika ride that follows is a thoroughly madcap dash worthy of the Keystone Kops, and the march in “L’enterrement” is played with such utter seriousness that it becomes a devastating parody, as well it should be.

Through the entire suite, Chiu is all over the keyboard in grand style. His extroverted playing and dead-on sense of satire is perfect for this piece. He orchestrates from the keyboard with even more color and flexibility than he displayed in Cinderella, and captures every mood with uncanny accuracy. It is not only a fitting end to this disc, but, in all its jaw-dropping genius, is probably one of the finest performances of all time.

Jonathan Yungkans beat a 95-degree heat wave by tuning in to the wintriness of Lieutenant Kije on this recording.