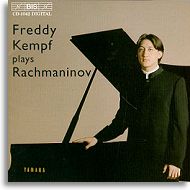 Marc interviews Freddy Kempf in the UK.Following the acclaim of his first disc, Freddy Kempf plays Schumann (BIS 960), the young British pianist has now turned his attention to Rachmaninov. This is in many ways a finer disc, displaying a touch that is mercurial and a tone that gleams like a golden fleece. The sonorities are as fiery as the Phlegethon as Kempf steers a course through Rachmaninov’s opulent sound-world. These are performances that float notes as gracefully as any and mix dizzying virtuosity with tempered poetry.

The Second Sonata is extremely fine, and Kempf is quite incandescent in his handling of the glittering figuration. The opening chords are volcanic, erupting with a chaotic cloak of colour that mixes vermilion’s with scorched yellows. The colours do not so much collide, as coalesce, as the densely chromatic decoration moves almost laterally into passages of the most intimate beauty.

This is first and foremost a kaleidoscopic interpretation, one that, whilst perhaps lacking the monumental scale that Horowitz brought to the work, seeks refuge in the lyricism of the Rachmaninov of the Second Concerto. In fact, although Kempf plays the original 1913 version one is constantly aware of him looking back farther to the beginning of the century, and the Second Concerto of 1901, rather than the more contemporaneous Third Concerto from 1909.

The restoration of the 113 bars cut for the 1931 version gives this work an homogeneity that is now easy to appreciate. The rhetoric and surging passion of the opening movement, with its rugged textures, and supremely baritonal strength (listen to Kempf at 6’01 to 6’28), are majestically drawn. The lyricism and dynamic shadings grow almost preternaturally (7’05 onwards).

Kempf gives his second movement – marked only non allegro – attacca – a dreamy landscape of delicious seductiveness, the harmonies more clearly Scriabinesque than we usually hear. From 2’48 to 3’14 you can hear exactly how Kempf links this Sonata back to the sound of the Second Concerto. The final movement is a veritable tour de force, and Kempf’s pianism here reaches transcendental peaks. The Romanticism of this movement is red-blooded, with a potent, almost sexually charged dynamism. The colours are almost always darker than before – crimson tides, with an almost port-wined darkness to his tone. From 5’02 he launches the final pages with wild abandon.

A colleague recently sent me a copy of a CDR performance of Kempf (left) playing the Op.36 Sonata at the Shirakawa Hall in Nagoya (from Kempf’s 1999 Japanese tour). If anything, this is an even more incandescent performance, with the colours more fin-de-siecle than in this recorded version. There is added spaciousness to the slow movement, a more varied sense of poetic bewilderment, and an almost Homeric mystery to the movement’s development. This is then contrasted by a more mercurial tension to the closing allegro and a dramatic tempest of almost frenetic passion.

The Etudes-tableaux require an even greater sense of coloration in order to bring the sinuous writing to the fore. Alternating between eddying vibrancy, vortex-driven harmonies, desolation and almost cavernous sonorities their moods are multifarious. Kempf achieves this, and more, magnificently. Just listen to his handling of the Appassionato (No.5), to hear how he gets an almost orchestral palette from the piano. The line is inexorably held, long-breathed and alternating between a whisper to the most plangent echo. In No.6, his triplets and treble semi-quavers are devolved from the most assured technique, but the personality he attaches to each set of notes paints a picture of quite astonishing realism. No.9 has real panache, with notes ricocheting from the keyboard and a dramatic rhythmic tension.

In short, this is a superb disc. Kempf’s pianism is often like a tsunami, swelling with both passion and poetry. The technique is superb, the understanding of Rachmaninov’s image-fuelled writing often more so. The sounds he gets from the Yamaha piano are amongst the most convincing I have heard from this instrument, the recording very natural. A winning disc.