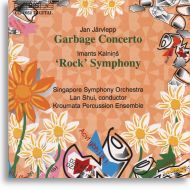 Jan JRVLEPP (b.1953)
Garbage Concerto (1996)
A Concerto for Recycled Garbage and Orchestra

What do you get when a tropical city orchestra, a Chinese-born American conductor, a Swedish percussion quintet, a Canadian post-modernistic iconoclast and a Latvian rock musician-turned-composer come together?

Something out of a Dr Suess storybook, you’d probably say, and I wouldn’t blame you. Following the release of the complete Tcherepnin symphonies last year, the Singapore Symphony Orchestra, under the impetus of musical director Lan Shui, has continued its exploration of classical exotica with yet another offering of obscure works by composers Jan Jrvlepp and Imants Kalnins.

Both works on this new album, in fact, draw on the influences of the heady days of seventies rock music. Jan Jrvlepp (left – photo from composer’s website) has gathered a motley assortment of recycled garbage objects like metal cans, glass jars, plastic bottles, hubcaps and a paper bag (listen out for it near the end of the first movement), and written a pluralistic five-part concertante around them. By his own admission, the music also “[draws] upon my experience as a teenage rock guitarist” while at the same time, ventures into a contemporary post-avant garde style.

The result is the Garbage Concerto, subtitled “A Concerto for Recycled Garbage and Orchestra”. Doing the honours (to use a popular SSO clich) are the Swedish percussion ensemble Kroumata; the initial public concerts of this work preceding the recording sessions were dedicated to the Tenth Anniversary of the orchestra’s fund-raising Ladies League.

The work is in the typical fast-slow-fast concerto form, with each movement given an imaginative (to say the least) programmatic subtitle, although the sleeve notes do not explain how they relate to the music. Dance of the Wind is a thrusting, hard-driven dialogue alternating between orchestra and soloists.

Following this is The Rideau Canal 3 a.m., with the soloists blowing across glass bottles filled with varying levels of water against a minimalist symphonic landscape. Here, Lan sustains the level of early suspense very well, but musically there is little development and at the last, the electronic-sounding bottle-tones outstay their novelty.

With an abrupt change of mood, the last movement, Rain Dance, resumes with loud, fast and upbeat rhythms, although the percussive element sounds gratuituosly banal in the opening bars. This is soon reversed, however: the orchestra takes a distant back seat to soli percussion, riddled with conflicting time signatures (11/16 at one point !) and unusual percussive effects. Kroumata hammer out the music (in more ways than one, literally) with some élan and credit must also be given to the orchestra for assuming their thankless supporting role so ably.

But ultimately, this work leaves me somewhat ambivalent. It is a formidable piece of postmodern writing which might not be everyone’s taste, although it does showcase excellently the playing ability (to say nothing of their courage in exploring and recording this repertoire) of the young orchestra and its conductor. There is also something about the piece which suggests a crucial visual element of performance – showmanship is, after all, an integral component of the solo percussionist’s craft – that is, obviously, missing on disc.

If memory serves, Imants Kalnins’ “Rock” Symphony was soundly panned by the local newspaper critic when it was performed by the orchestra as part of its 1999 subscription season. Apparently he did not agree with the pseudo-fusion of rock and classical, even if the drama and accessibility of this music is irrefutable. Thankfully, that did not stop the orchestra from going on to record this for posterity, and I for one have been eagerly waiting for it.

(The performance of the “Rock” Symphony is reviewed here by the Inkpot).

The eponymous “rock” of the title refers not to any particular geological feature, but rather to the movement of angry protest music that swept the world in the post-Vietnam years. This symphony itself finds its roots as a form of protest – Latvian composer Kalnins (left) was part of a rock group that was banned in Latvia behind the Iron Curtain in 1970 and this work was his response to that forbidden desire for decadent capitalist rock music.

At some points it sounds like a track from a bad pornographic movie or some schlocky crossover à la “The Royal Philharmonic plays The Who”, to be sure, but there is an intense, forward-thrusting ostinato in the perpetuum mobile-like first movement that head-bangingly sweeps the listener along. The second movement opens with a melodic figure which is hauntingly lyrical, characteristic of the Eastern European school of composition, with hints of sub-surface turbulence in the occasional orchestral interjections. The orchestra sound here is as lush and sonorous as they have ever been on record.

The disquiet brewing in the second movement finally surfaces in the Grave molto of the third movement; yet this is not a disruptive clash of tonalities, but rather a colourful exposition of folk-like melodies and rhythms that clearly has inherited from Dvorák, Rimsky-Korsakov and Mussorgsky. The Singapore Symphony Orchestra is missing just that last bit of Slavonic character in pulling this one off, but that’s not to take anything away from their already impressive playing.

We Fill The Gaps

When you left, I cried fiercely
Then I died.
Will you suffer my sorrow, let me forgive you.
I will when the owl lights on the oak
Sweep with my brush your loose hair back,
And love you in bed.
And wrap this sweet sheet round you until you are dead.

The wet west wind wrapped us up;
Red leaves rained down your back.
Oh, you – I know who you are,
Dragon dragging your muffled fires through the chilled woods.
If you were an angel, I would laugh you out of heaven,
And set your hair on fire
And your black eyes burning would bloom like a black flower.

The colours of wind are cold.
On a cold night, I read some books,
And some books are cold, but I read
And in my head,
I know I hear gray grating words winged on an arctic wind.

He’s absurd…
How he loved me!
Trembled, if I touched his hand.
I saw his quick eyes glittering in the night.
I saw him strip off his kin.
And white bones clattering, he fled into the night.

Against the blue air,
He floats muter than a ghost.
I watch his wavering there,
Upon the air, and wait for his words to fall on me,
Words I want most.
But he says nothing at all, but floats above the air.

In this pink dawn, my heart flares up and dies down.
Bright wind crackles around my ankles.

I held my tongue when you went away.
If I said I loved you, it was because I was bored.
Or in an aimless moment,
I many have caught the mood of the moon
Making overtures toward a mockingbird.
I could have sworn I saw the leaves changing colour,
The west wind torn from the sky and bunched into a cloud.
I could have sworn you scorched my sleep like lightning.

Idiomatically, the final movement transforms from a neo-Nationalistic mien into an eclectic, quasi-rock song-cycle, with Kalnins setting a soprano voice (electronically amplified on microphone) to the prose poems of Beat poet Kelly Cherry. The result, as bizarre as it sounds, is a self-contained amphibolic mix of Hindemith (When Lilacs Last in the Dooryard Bloom’d) meets rock opera (Evita) meets The Best of ABBA. If you listen carefully, you can even hear the occasional snippet of syncopated narration, which uncannily foreshadows what people today call rap.

This is music, and I’m not saying this lightly, that evokes the psychedelia of curtained beads, lava lamps and the Age of Aquarius on a grand scale, and furthermore, it grows on you. By the time you get to the last stanza of the song-cycle and the soprano invokes the magical lines “The sun like a silent song will burn up the far side of night – I will remember you !”, it just makes all the little hairs on the back of your neck start jumping up and down.

Among the faults to be picked, the foremost is the serious crime of omission by BIS not to include the text of Cherry’s song-cycle in the programme booklet, nor has space been found for a biographical paragraph for soprano Jackie Short. The individual verses of the song-cycle could have been separately cued, or at the very least sub-indexed.

As an aside, BIS have used the old logo of Singapore Symphony Orchestra which was phased out in early 2000, which suggests that either this album was unusually long in the production, or somebody isn’t taking the logo branding of the orchestra too seriously.

The engineers have captured the distinctive acoustics of the Victoria Concert Hall well, although the empty hall is rather reverberant. There is too much bloom for my taste, resulting in some loss of detail and clarity in the louder passages, especially in the middle-range instruments (violas, cellos and low winds.) The percussion in the Garbage Concerto are very amply captured in stereophonic detail and Jackie Short is placed very well in relation to the instruments, so no complaints with respect to the soloists.

If you have never heard Kalnins’s “Rock” Symphony, it is definitely well worth a listen, especially if you are old enough to remember the heyday of the hard rockin’ seventies. Jrvlepp isn’t a bad complement alongside this repertoire, either. This is the sort of music which one will either intensely like or hate, but ignore it at your own peril. Or, in the words of another famous rock anthem,

“There will be an answer, let it be…”