Reviews by the Inkpot Sibelius Nutcase

An Inktroduction to the Seventh Symphony 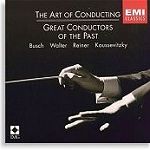 Symphony No.7. + Works by Mozart, Mahler and Wagner. From The Art of Conducting Volume 3.
BBC Symphony Orchestra
conducted by Serge Koussevitsky

As the Seventh Symphony relies a lot on sonority, historic recordings tend to lose a considerable degree of “substance”, more than other pieces of music. Well, at least for me. But when I first heard this 1933 version on the Pearl label, I was astounded by the quality possible. Despite the unavoidable hiss and the reduced sound body, this historic Seventh is very listenable. Koussevitsky conducts with fine pace and a genuine understanding of the organic progression of the Symphony. The BBC Symphony, particularly the strings, singing with great – almost silvery – intensity. Listen for their churning storm in the Adagio section (track 10, letter L in score). As a whole, the orchestra sounds great, but specific wind solo and section parts aren’t really flattered on this recording. The trombone solos are powerfully played, though there isn’t any bloom around it.

Whether you like the main body of this performance, do make sure you hear the ending. One special attribute of Koussevitsky’s reading here is the trumpet high “C” played in the final chord. This is an option chosen by a few conductors – I know some people don’t like it, but I find it can add a tremendously heroic, earth-shaking sheen over the music, as the trumpet section hymns the glory of C major above the orchestra. In Koussevitsky’s attempt here, the “historic” soundscape adds a certain poignant edge over this effect – and when I first heard it, I was bowled over completely.

I can no longer remember how the quality of the remaster on the Pearl label was like (I don’t even know if the album is available), but I was glad to be able to find this reissue on “The Art of Conducting” series on EMI. You will hear swish at the beginning, but fortunately it fades off and only reappears intermittently. The rest of the recording is satisfactory to my ears, but I curse EMI for ending the disc very rudely and abruptly at the same moment the final chord finishes, which deprives us of that cosmic reberb at the end. 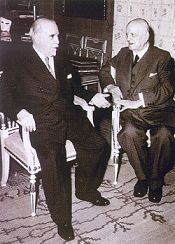 Sir Thomas Beecham, possibly the most English of the English conductors, was a good friend and champion of Sibelius. His recordings of the composer’s music are loved and respected by many. The fact that three separate companies have elected to issue three separate historic recordings of his Sibelius records, each with one of the Seventh, surely attests to this. In 1942, Beecham (left, with Sibelius) recorded this reading for American Columbia in New York – which he then considered not up to standard and sued the record company for issuing them without his approval – he lost.

The first thing that strikes one is the richness of this superb remastering – it doesn’t sound old at all and is very immediate. The strings glow with rich tone, the woodwinds flutter and sing with golden voices (even the oboe has a punchy pungent tone about it), the brass ring with confidence and even the timpani boom with dignified bass. Details abound – there is a wind (trumpet/horn???) pedal in the third track which I confess I’ve never heard before (this is why I have so many different versions…) elsewhere.

The unstoppable sweeping momentum of this performance is its greatest asset – phrases move, rush and streak forward with windswept strength and riverine flow, entirely natural. Quite simply, the irresistible forward pulse which Beecham achieves here is very very rarely heard. At no point does Beecham lose control, and yet the orchestra sounds so “free”, so playing-without-inhibition. I suspect some listeners will consider this reading to be rushing or heavy-handed – but give it some time, try it out a few times and let it speak to you.

The tone of this performance is bright – trimphant. It brims with glorious confidence and optimism, quite simply one of the most joyous versions of the Seventh I’ve ever heard. The directly uttered layers of the final bars are majestically wrought with finality, and Dutton Labs culminate this triumph of a recording by giving us the reverb into silence. The Nutcase’s Choice for Historic Recording.

This seems a fairly straightforward reading – maybe “aloof” in a good way. There is a sense of detachment, but the performance exudes a sense of sweep and the C minor climax in the middle is powerful wrought but in a somehow “light” feeling. The reading is quiescent yet has something powerful to say. Ehrling’s conducting is exemplary in the sense that he gets the flow and structure of the symphony very right. If you like a very “untouchable”, faraway quality to the Seventh, you might like this one. The 1952 sound has been remastered well, with ample dynamic range and good tone quality in the orchestra. The woodwinds are particularly clean, though I am a little uncomfortable with the slightly wobbly trombone. Not exactly recommendable above the rest of the versions here then, but nevertheless worth hearing. Maybe it’ll grow on me.

From 1951 onwards, a festival was held in Helsinki every year, called Sibelius Week. As the name suggests, it was a time of celebration in the name of Sibelius’ music. The festival was reorganised as the Helsinki Festival from 1968 onwards, so that it could feature other composers (oh, and the 1960s is also the only period so far of a downward trend in Sibelius’ popularity).

In the festival of 1954, David Oistrakh and Sir Thomas Beecham were among the participants. This disc includes the former’s performance of the Violin Concerto – which so impressed the Finnish that the audience not only gave him a standing ovation, but the orchestra spontaneously burst into a fanfare in honour of the soloist. In my opinion, among Oistrakh’s many recordings of this concerto, this isn’t his best! But that’s another story…

Sir Thomas’ reading of the Seventh was one of the high points of the Sibelius Week, 1954. It is a direct and forward performance, timed at just 19’23. The musis is handled with great sense of momentum and dignity. Occasionally there are some rather hard-hitting moments – certainly this rendition is not as mellow as his 1955 recording for EMI (below), but similarly skilfully and idiomatically played. Indeed, there is definitely a darker edge to the music (well, both conductor and composer were near the end of their lives) and the climaxes are powerfully sculpted (though the third one sounds a little ugly). All is aided by the very satisfactory Ondine remaster. Unlike the 1955 version, Beecham chose to draw out the final chord, whose dark atmosphere is similar to Koussevitsky’s reading (see above) – overall it is done with heartfelt feeling, floating grandly and serenely to the end.

These recordings were made as in celebration of the composer’s 90th birthday and considering their age, they are remarkable performances. Though to some extent the readings lack the finesse of modern recorded readings – I would say because there were few, if any, precedents – there are insights aplenty to the readings. (In fact, Sibelius asked Beecham to record The Oceandies).

Anyway, this early stereo recording (which I think has even more depth than Colin Davis’ RCA recording) of the Seventh Symphony has wonderful pace, the kind Beecham the conductor was famous for instilling in his Royal Phil players. The famous string section of this orchestra produce some really beautiful sounds, as does the trombonist. Unusally for me, I enjoyed the final two thirds of this performance more than first third, the latter whose progression is not quite so smooth. The final bars have a slightly different “sequence” (one of the great mysteries of this Symphony is the way the final sequence of instrumental layers manifest) which Beecham sculpts with vision. Though I still don’t like the way many British conductors “straighten” the final chord into a block, this remains a very respectable reading. The disc is coupled with Beecham’s equally famous renditions of the Pellas et Mlisande Suite and Tapiola.

BIS and Chandos discs are available in Singapore from HMV (The Heeren) and Borders (Wheelock Place). DG, EMI and Sony discs can be ordered from the usual places. Look for Naxos at Borders or Tower/Suntec City.