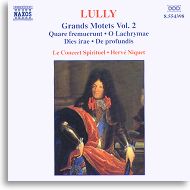 Lully (“LOO-lee”) is the 17th century French composer who suffered Death by Conducting, when he accidentally (and no doubt painfully) stabbed his toe with his conducting stick and contracted nothing less than a fatal dose of gangrene. He had been directing 150 musicians on 8 January 1687 in a performance of this Te Deum when this very unfortunate footnote in his 55-year life occured.

(Apologies to those of you who’ve heard the story before; it’s just such an irresistibly interesting way to start a conversation about Monsieur Lully).

These recordings of quintessentially French motets are part of an ongoing series (bravo!) on Naxos. The performers stated on the cover are not unfamiliar – Le Concert Spirituel and their director Hervé Niquet – highly acclaimed already for previous recordings of other similar music, including Charpentier, Boismortier and more Lully, among others.

Well, the aforementioned Te Deum begins this collection of “Great Motets”. It is always good to have the French perform the French, and surely, with the spirited and authentic readings here, one could hardly not agree. Comparing this with another recording I have – a rather oldish Erato record from conductor Jean-François Paillard (0630-11226-2), the Naxos version is infinitely superior not just in terms of sound, but style, expressive execution and spirit. Truly, the work done by Hervé Niquet deserves great praise.

The colourful, vibrant and above all many-faceted personality of the score is faithfully captured by the performers. In good spirit the tabors and winds march through the festive opening. The performers prance about the fast movements, running merrily with unfazed elegance mixed with formal festivity, or slowly drift into long stretches of sweet choral strains – all with the kind of carefree diligence and unforced spirit of expression so special to the French.

Church music this may be, but you’ll be hard pressed not to tap your toes and sway your heads to this music! I’m not at all surprised that Monsieur Lully got so involved in this music and forgot to mind his toe! Think: atmosphere of Renaissance French theatre in the service of sacred musical celebration. The elegant sounds of three theorbos grace the large but beautifully balanced Le Concert Spirituel orchestra, plus the soft hummings of recorders and flutes, all adding to the overall colour. Lully’s Te Deum is one of the most finely balanced models of its genre.

Of course there’s the slow, beautiful music. The 1664 setting of the Miserere is as inspired as it is magnificent. Lully’s creation was to influence the cantatas, motets and anthems which the rest of Europe would write in the future. The dramatic effects are supported through Lully’s use of multiple choruses, of small chorus set against a larger one, such that the reference to Lully’s experience in opera cannot be missed.

If anything, the 7-minute motet Plaude lætare Gallia is a miniature gem of exceptional balance and expressive range which displays the sheer skill with which Lully encompasses so many moods and feelings within its short duration. And like the Quare fremuerunt of Vol.2, it ends with one of those very lovely French Baroque choral trills.

One scary little fact is that these recordings were made in November 1993, some six years before the Naxos release (or perhaps it has been released elsewhere not to my knowledge). In any case, the important thing is that the acoustics and engineering are very nice – I really loved the sounds that the large festive orchestra produced for the Te Deum, woodwinds, trumpets, percussion, et al.

French music in almost all its varieties are an acquired taste to some extent (then again, lots of things of the French are… escargot, Gerard Depardieu, Sartre, not bathing in the 17th century)… but typically, once one appreciates their art, their subtleties are simply amazing. Don’t get me wrong, Lully may not have sought heeling – I mean healing – for his toe, but that certainly does not rob any sole – I mean soul – from his music…

Chia Han-Leon has his hands over his head now.