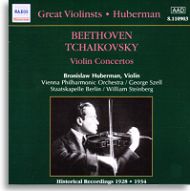 When Bronislaw Huberman (1882-1947) was but 13, he performed Brahms’ Violin Concerto, reducing the composer to tears, earning for himself a kiss on the forehead from the old man and an anecdote for which he is always remembered nowadays for. What may be less well-known is that Huberman also founded the Israel Philharmonic Orchestra, and was the main reason behind the virtual banishment of Richard Wagner from the concert stage of the Holy Land in response to the Holocaust (Hitler’s favourite composer was Wagner himself, followed by Bruckner).

However tantalizing the prospects of a Brahms Violin Concerto recording with Huberman may be, we are left instead with a small body of concerto recordings, including a Lalo Symphonie Espagnole, some short virtuoso pieces, and on this disc, the concertos by Beethoven and Tchaikovsky.

Since the Beethoven is the only recording known to exist with Huberman, the matter of repeated discographies can be swiftly ignored. What we have here is a performance of dazzling daring, virtuosity, substantially different enough in every way from any other performance of the Beethoven I have heard to warrant listening to at least a few times.

Not least outstanding, and stunning are the cadenzas that Huberman penned himself. Nothing short of bizarre would begin to describe these; cadenzas they are as they use material from the concerto, but the Paganini-esque throwbacks and revelry in violinistic wizardry bring to mind indelible images of the premiere of the concerto in the church, where the dedicatee reported performing tricks on a single-stringed, upside down violin.

The first-movement cadenza is one of the longest, and most difficult I have ever heard for the concerto, and a quick comparison with the Kreisler version quickly reveals its weaknesses all the same: it is not at all in character with the olympian nature of the first movement of the concerto, it is substantially less musical and substantially less well-structured. But endlessly fascinating! Huberman plays with a consistent, but varied use of glissandi and portamenti, a little a la Kreisler, but much, much more.

The orchestra, the Vienna Philharmonic Orchestra in its early (1928) days right between the two great wars, plays magnificently, with George Szell surprising us with his pliancy of tempi, bending tempi any- and everywhere. It is said that Szell was always happiest when performing in Europe – this record surely shows it.

The transfers by David Lennick are good, with the violin positioned forward as engineers liked to at that time. There is a spot where reverberation seems to have been added to the bass, somewhere at the last bit of the Rondo, but really this should not trouble any but the most finicky, myself for instance. If you don’t know this performance you will definitely derive much pleasure from it.

Huberman’s foray with Tchaikovsky is not his only one, but it is the more exciting of the two there are. This performance was previously available on the EMI Tchaikovsky Historical set, in very good sound, and as you will find later, a competitive transfer, but that only comes with three other (very good) discs. If your priority is this concerto, then I say, get this disc.

First of all let me point out that the first and third movements are cut in the usual manner of the time – and rather savagely, I must say in the Finale. What is left, is pure gold.

Daring in every way, dazzling and full of life, Huberman’s silvery tone darting about like a “trout in water” (paraphrased from Christopher Nupen regarding Jacqueline du Pre’s performance) – throwing off beams of light as it does.

Collectors of the Tchaikovsky concerto unconvinced at the essentialness of this performance may turn to the coda of the first movement. Listen carefully – technique which at its best would put Heifetz to shame. Steinberg, an underrated conductor who never really became famous is the cheerful accomplice to Huberman in this concerto and the Staatskapelle Berlin play bravely – an amazing performance in every way.

The transfer of the concerto (with a few notes regarding the different dates of the studio recording) by Mark Obert-Thorne, one of the foremost restoring engineers, is excellent, with the violin placed more naturally than on the EMI transfer. However, as is often the case with this concerto, one might be more easily pleased with the EMI as the violinist is more spotlighted (as indeed are present-day recordings of the concerto).

Obert-Thorne restores the violin to its natural sound-perspective, but the reader might like to know that the EMI is by no means thus much inferior, though the Naxos transfer gives more orchestral detail for instance (try the pizzicati parts to tell the difference) If you have the EMI set and would like to try out the Beethoven, there is another transfer on Appian Records, coupled with the Lalo Symphonie Espagnole, the sound there is better, but the CD is full-priced everywhere I’ve seen it.

Time for Naxos to transfer the Lalo too – please let Mr Obert-Thorne handle it.