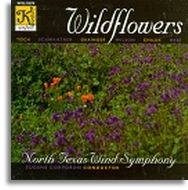 Through the efforts of many musicians, conductors and composers, the wind band has in recent years established itself as a viable artistic medium. Gone are the days when the word ‘band’ conjures up marching brass players in military uniform. Today’s wind symphonies and orchestras are sophisticated musical bodies that rival any others in performance standards and repertoire.

Among the very best of contemporary wind bands is the North Texas Wind Symphony under the direction of Eugene Corporon, one of the foremost music educators and wind conductors of the day. Together with the Cincinatti College-Conservatory of Music Wind Symphony, Corporon initiated “The Klavier Wind Recording Project” which has to date produced more than a dozen CDs of fabulous performances of the cream of the wind band repertory.

“Wildflowers” ranks as one of my favourite recordings in the series, and is in fact, probably my one favourite album of wind band music of all time. Taking its title from Percy Grainger’s description of his piece Lincolnshire Posy, “a bunch of musical wildflowers”, the selection of pieces is diverse and yet each unique.

The opening piece Spiel op. 39 is by Pulitzer-winning composer Ernst Toch and was composed for the 1926 Donaueschingen Music Festival organized by Paul Hindemith with the purpose of creating repertoire for overlooked ensembles. How apt, in retrospect, is this piece of music in the light of what the North Texas Wind Symphony has achieved.

Toch noted in the score that the piece could be performed, either by a military band or the wind section of an orchestra. In the dedicated hands of the Wind Symphony, the piece springs to life in all its lightness and detail that I imagine would never have been attainable by the ensembles the composer imagined.

Joseph Schwanter and Dana Wilson are two prolific living composers that have written music for the wind band that has received great acclaim. The former, also a Pulitzer winner, is on the faculty of composition at the famed Eastman School of Music.

Incidentally, the Eastman Wind Ensemble under the great Frederick Fennell had dominated the scene in the 1960s and 1970s with their most outstanding recordings. It is thus no surprise that Schwanter would produce this difficult piece of such magnitude and effect. Scored for large wind ensemble, amplified piano, fifty percussion instruments and even tuned glass crystals, the work is a true marvel to behold in performance. “And the mountains rising nowhere” is based on a poem by Carol Adler, and though not strictly programmatic truly evokes images:

Dana Wilson’s Dance of the New World on the other hand draws on elements from multicultural and ethnic America and in the composer’s words, was written to “(capture) the spirit of awakening and burgeoning that resulted from his (Columbus’) journey”. Highly rhythmic and complex (obvious within moments from the percussion and flute passage in the beginning), the band handles it with great precision while remaining sympathetic to the groove of some of the Latin-American beats.

It is really quite fascinating to behold the level of attainment this ensemble has reached that is fully captured on Klavier’s splendid recording. The level of technical proficiency in wind playing achieved by these students of the University of North Texas College of Music leaves many professed “professional ensembles” in the dust.

In the wake of the Dance is another rhythmically charged work, this time understandably so because it is a percussion concerto. William Child’s Concerto for Solo Percussionist is truly one of its kind in the repertoire, commissioned and performed by Steve Houghton.

Mr. Houghton’s ability to excel in each of these diverse styles is most admirable, and he displays as much feel for melody as he does with rhythm. I suspect this is the only recording of the work, and one performed by the dedicatee no less. One of the highlights of this collection for sure.

British composer Paul Hart’s name is known in commercial music circles as a prolific composer of jingles, TV and movie themes. Yet, he remains one of Europe’s most interesting contemporary composers whose work often incorporates jazz elements and a heightened sense of fun. One should look out for his Concerto for guitarist John Williams, and his other pieces for the wind band Journey and Celebration and Circus Ring. 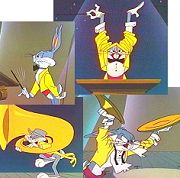 The subject of Cartoon is almost trivial with the “big opening credits, cat and mouse tease-and-chase, the strutting swagger and of course the BIG FINALE“.

One of my teachers pointed out the fact to me that if you listened to the music of those old cartoons without watching the images, it was “contemporary” music – so there you have it. Listen out for the dazzling virtuosity in mid-piece, from practically every section as they embark on a wild rampage of running notes, and also for that sweet blues trumpet solo in the slow section. It’s almost impossible not to be entertained by this music, nor be unimpressed by the playing.

I’ve not forgotten Percy Grainger‘s Lincolnshire Posy which features prominently on this disc. It is in my mind, a seminal work in the repertoire. These are settings of folk songs Grainger collected in the early 1900s. He collected these by means of scribing on what must have been the earliest versions of a recording, which meant that he captured not just the songs and notes on paper, but the sound and way those “kings and queens of songs” delivered them. He created each movement as an individual portrait of each of these singers. These personal tributes capture the singer’s personal feelings about the song, and a lot of singers’ characters themselves.

Each movement is remarkable. Grainger retained every nuance of the dictated music, so that instead of applying conventionally even meters, the phrases are often shortened and lengthened at whim. Having some experience performing this music, the thing was always to get beneath the notes and understand on a deeper level each phrase. This the members of the North Texas and Mr. Corporon do with great sensitivity, melding the understanding of the music with their impeccable playing. With Grainger’s difficult harmonies, the challenges posed are many but this ensemble pulls it off sounding easeful and relaxed.

There are only two other recordings of this work that in my opinion share the top spot with this one – Frederick Fennell’s early recording with the Eastman Wind Ensemble and Timothy Reynish’s rendition with the Royal Northern College of Music (UK) on Vol. 4 of the Chandos Grainger Edition.

Well, my only caution to wind enthusiasts about this recording is that it might eventually burn a huge hole in your pocket wanting to collect every disc in the series (as I have). While I shall diligently pick out my favourites to talk about, I assure you that no selection from this series will be disappointing.

OK. I’m gushing out of admiration, but go get it anyway.

Band CDs can be ordered on-line from the Singapore-based Classical Music Collections.

Adrian Tan is looking out for fellow wind music enthusiasts to join him on his crusade to promote the best wind band recordings on the internet!