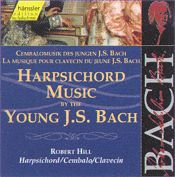 Prelude and fugue in A major, BWV 896

Fantasia and Fugue in A minor, BWV 944 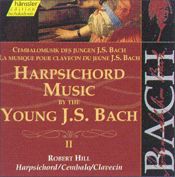 Harpsichord Music by the

by Benjamin Chee When I first heard about “The Harpsichord Music by the Young Johann Sebastian Bach as a Young Man”, I could not begin to imagine the porty, aristocratic and timeless Kapellmeister of Weimar-Cöthen-Leipzig as a post-adolescent teenager, much less imagine him, at that age, sitting at the keyboard busily composing.

But an inspection of the Chwialkowski catalog (Da Capo, New York 1996) reveals a sheaf of well over 300 keyboard works in his quiver, some of them apocryphal. Nonetheless there still is a considerable scope for exploration: Suites, Preludes, Fugues, und so weiter; quoins from which Bach built his compositional foundations. Most of these have been eclipsed by the mature works (the Well-Tempered Clavier, the Goldberg Variations), not the least of which because of the quality between the young and the old Bach. His music, it has to be said, did get better with age.

Our lack of familiarity with his early works may account in part for this lack of understanding, or perhaps even critically viewing them with the same expectations from his mature works. Bach also experimented with models from various other composers, often resulting in an early style less which was than fully refined.

Authenticity is always a problem, but Hänssler have adopted a broad view by weighing the quality of the pieces within the contexts where they appear. Borderline cases which have been passed down as Bach’s music from 18th century sources or, in the past have attracted interest but may not be authentic, have been included. This, with the objective of providing as full a picture of the young Bach as possible, even at the risk of including some things not authentically his.

The first volume contains nine items, amply distributed across forty tracks. Robert Hill, with no less credentials than a professorship of historical performance at the Freiburg College of Music, performs these works. A lot of this material is admittedly nascent, with occasional flashes of the mature Bach, and certainly, a musical inventiveness that did not abate with age.

There is no lack of authority or virtuosity in Hill’s playing, from the ear-tickling Capriccio “on the departure of the Beloved Brother” BWV 992, to the Middle German stylings of Preludium and Partita in F BWV 833 and the French Suite in A BWV 832. These come in vignettes of short movements averaging just under two minutes each.

But the Sonata in A minor BWV 967, one of the earliest works in the collection, sounds a tad heavy-handed, even allowing for the bold, unrefined character of the music. The Aria variata »alla Maniera Italiana« BWV 989 (cool title !), as the name suggests, is a set of ten variations after the style of late 17th-century Italian composers that finds Hill making out as persuasive a case for them as he can.

The Fantasia of the Fantasia and Fugue in A minor BWV 994 arrives as an absolute downpour of ceaseless notes – you can tell that Hill simply revels in this – foreshadowing, perhaps, the age of the Romantic virtuoso-composer pianists that would not yet arrive for another century.

For the most part, he delivers an idiosyncratic reading, sprinkled with eager embellishments – ornaments, appoggiaturas, rubato, and the like, so much so that rococo – the byword for elaborate and profuse decoration, even to the point of expansive tastelessness – seems a more suitable description of this music than baroque. Yet it is mostly executed (a two-edged word, if there was ever one) in good taste.

The second volume comes on a pair of discs; basically, more of the same as volume one. I’m not sure what the average classical listener will make of all this juvenilia: for all its inventiveness in composition and intelligence in performance, I won’t feasibly recommend for it to be taken more than one disc at a time, excepting the most die-hard harpsichord fans.

Nonetheless, there are some items here that will prove rewarding for the intrepid listener, albeit there are no familar hummable themes forthcoming. The Sonata in D BWV 963 that leads off the first disc is charmingly piquant. Hill inserts a deliberate, florid trill at the end of the first movement Ohne Bezeichnung (“Without Description”) that can’t fail to put a smile on your face; the Thema all’Imitatio Gallina Cuccu movement is equally ingratiating.

The courtly dance movements (Allemande, Courante and Sarabande) of the Suite in B flat BWV 821 sound somewhat out of place being pecked out on the harpsichord, with Hill’s affectations sounding more stodgy than buoyant. A bit more flair and extroversion, as in the last movement Echo, would have helped; that said, the musical effect of the repeated “echo” phrases is considerably diminished by the limitations of the harpsichord’s dynamics. This is one interpretation which, although polished, could do with a bit more sparkle.

All the works on the discs are separately tracked by movements, but curiously, the Sarabande con Partite in C BWV 990 is simply listed as Tracks 14 – 29 with a grand total of 19’03, with no other information of the individual movements found anywhere in the sleeve booklet. Considering the relative obscurity of these works, excluding something as basic as individual movement descriptions seems a grave omission. That said, the music is played with much refinement, and there is distinctive character imparted to each of the partite (“variations”).

The Präludium in B minor BWV 923 is another congested torrent of roulades and arpeggios with touches of wilful filigree; and the brilliantly taken B minor Fugue BWV 951 which follows is just the right amount of ballast to conclude disc one.

The second disc, at forty-nine minutes, is fully eight minutes shorter than the first and it was a wise decision by Hänssler to couple both discs together rather than to put them out separately with less-than-average content on each containing obscure estorica. The coda of the opening Toccata in D BWV 912a is crisply spun out although the clapping of the instrument’s damper as the last notes echo out is aurally unsightly.

The Overture in G minor BWV 822 sounds curiously like a reduced transcription of an ensemble suite but it is to his credit that in the hands of Hill these nuances come through. The Bourrée is especially well done. The Albinoni Fugues, as compositional studies, are equally idiosyncratic. The collection concludes full circle with a rousing Capriccio in E “in Honour of Johann Christoph Bach” BWV 993, finishing what began with the Capriccio BWV 992 on volume one.

The recording is brilliantly – although at times aggressively – staged. There is slight bloom to add chamber-auditorium depth to the sound. With new digital format, the presence and tangibility of the instrument (a 1998 copy by Keith Hill after Pascal Taskin, Paris 1769) is nothing short of spectacular; even so, the brightness of the focus can become tiring after prolonged listening.

Certainly these collections cannot be criticized on grounds of performance quality or recording, for Robert Hill is equally aesthetic as well as intellectual in his approach. He plays with an impressive level of presdigitation and bravura, not to mention ornamentation. His colourful interpretation may not be to everyone’s taste, but nonetheless these are still highly enjoyable works.