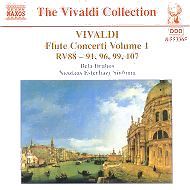 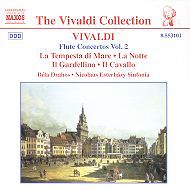 Vivaldi composed hundreds of concerti, and in doing so, gave woodwinders a decent repertoire (and clarinettists should thank him for at least giving the chalumeau something to play; otherwise, there’s nothing much from before Mozart). Like Haydn with the symphony, he developed the genre of the concerto – expanded it, explored it, wrote tons of them like exercises. Without Vivaldi’s experimentation on the possibilities of the concerto form, with virtually all the available instruments of the time – who knows what the concerto would be like today.

Among Vivaldi’s most popular and most appealing of concerti are the works for flute. The variety is myriad, colourful beyond belief and instantly accessible. From the invocation of birdsong to the raising of the winds, Vivaldi’s concerti for flute demand players who can staccato with the spittering speed of a gatling gun, and legato with the composed tranquility of a sunrise.

With movements averaging a mere 2-3 minutes, flutists tackling this repertoire need both concentration of interpretation, beauty and impeccability of tone and above all a sense of Vivaldi’s endless sparkling vitality and picturesque serenity.

Bla Drahos, better known for conducting a Naxos series of Beethoven and Haydn symphonies, is the able soloist in these two inexpensive volumes. Vol.1 comprises a miscellany of concerti; though led by the flute, many are accompanied by solo violin, oboe and/or bassoon. The scale is small – the border between chamber work and concertante work rather diffuse – but the poetics tight and concentrated. Drahos and his team from the Nicolaus Esterhzy Sinfonia give committed readings, with ample momentum and plentiful detail, note for note in these busy Baroque scores.

Drahos plays with a mellow and lightweight tone, of moderate woody voice and (thankfully) well-measured, limited vibrato. The clear recording shows no sign of any key clicks, which makes me wonder if he’s using a wooden/modified/Baroque flute. Ornamentation is discreet, and where it is obvious, Drahos achieves it with pleasant mildness. His interpretation is towards the mellow and straightforward side, which emphasises pastoral grace and sunny-meadow beauty, rather than virtuosity.

This makes for very pleasing, repeated listening, especially for the passing collector. When I bought Vol.1 back in 1998, the time of its release, I felt that the readings could not match those of mainstream Baroque specialists. In particular, I refered to my other budget recording on the Sony Seon series. This featured none other than Frans Brggen himself, with the Orchestra of the 18th Century – Anner Blysma on cello, Danny Bond on bassoon, and so on. First-class people here (Sony Seon SBK62954).

The results: in beauty of tone the period instruments are absolutely no match for the modern instruments that Drahos and his team uses – so even the great Brggen would produce one very off-key and half-strangled goldfinch singing in Il gardellino! Drahos, on the other hand, tweets and chirps for the bird in lyric prettiness. But on the side of artistic interpretation, you got to hand it to the masters – listen to Brggen’s wavering ghosts wooing in the “Fantasmi” (ghosts) of La Notte (“Night”), and you’ll see too how Vivaldi is one of the first great tone painters. 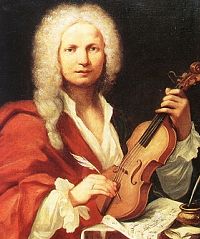 Left: Detail from an anonymous portrait of Vivaldi from the 18th century.

The transverse flute was so popular in the 18th century that this new, flexible instrument not only dethroned the recorder, but one Amsterdam publisher asked Vivaldi in 1725 to provide six concerti for distribution. From his many hundreds of works Vivaldi chose five, some originally for recorder, some dating back to 1703. He arranged these for flute and string orchestra, and wrote another to make six. This collection was issued in 1728 as the famous Op.10. As a result, don’t be surprised if you hear some familiar tunes from elsewhere.

Coming back to the Naxos discs, I cannot deny that on revisiting Vol.1 without reference to the Sony album, it was complete aural joy. Perhaps it is because of the highly commendable performances which are also to be found in Vol.2. (Incidentally, the recordings were made in 1995 and 1996). The new volume happily includes the cream of the crop, Vivaldi’s scintillating Opus 10. It begins with the famous La tempesta di mare (“The Sea Storm”) – in a happy pastoral F major (lest you think we’re talking howling wind and shipwreck).

I am fascinated by how the ensemble uses fairly moderate tempi, but delight with their expressive phrasings. Vivaldi’s fast-changing music can sometimes be a tad schizophrenic, hence shifts between sections, or the bridging phrases themselves, need to be executed with good sense – here they are. Drahos’ group impress with their intelligent pauses, dramatically anticipated runs and discreet dynamic shifts.

There is more than a hint of The Four Seasons in these works – try the third movement of Il sonno (“Sleep”) from La Notte, which is a replica of Autumn‘s slow movement depicting the sleeping drunkards. La Notte includes the Fantasmi mentioned above, which awakens to a lively finale (somewhat reminiscent of the 8am rush).

More favourites in Op.10 are No.4, with its joyous introduction, perfumed French court Largo and virtuoso gaiety of the finale; and No.5 with its feminine sylvan introduction and solemn but well-known slow movement. There’s No.6, nicknamed “Il cavallo” (The Horse), whose slow movement is another Vivaldian marvel of shifting emotions, after which our celebrated Venetian composer quickens to a gallop in the carefree ride of the merry finale.

Well, if you’re in the mood for Vivaldi, no hesitation required. Plus I like to invite people who associate the word “concerto” with the piano and violin to try some woodwind stuff – it really is a different world full of many delights. If you don’t feel like two volumes, go for Vol.2 with opus 10.

Chia Han-Leon once actually succeeded in playing the first movement of La tempesta di mare. He thanks the neighbourhood for their patience.