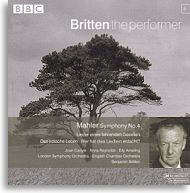 For some, the idea of having the great Benjamin Britten conduct Mahler will be reason enough to buy this release. Let me correct that somewhat. This CD has been one of the most rewarding I have encountered recently, and here Britten proves what a great Mahler conductor he would have been had he only tried (and been recorded), so the intrepid collector may buy this in the confidence that he will be getting a great Mahler performance.

Britten’s opening of the symphony is fast, perhaps even disconcertingly fast, as the programme notes admit – readers who have Szell’s justly famous performance (Sony Essential Classics) will perhaps understand what I mean. Compared to a number of other conductors, Britten’s pace throughout the first movement is swift, so that the overall movement of ideas is never allowed to linger or pool, a breath of fresh air in a market full of all those slow performances. Because of the sudden changes of mood which invade the fabric of the symphony, Britten’s approach is surprisingly very effective, and Mahler’s fantastic cloud-cuckoo land is evoked quickly. None of Mengelberg’s or Bernstein‘s lingering, or sentimentalising, Britten’s approach is a breath of fresh air. The trumpet episode looking forward to Mahler’s Fifth is harrowing and traumatic, in everywhere else Britten shows a profound understanding of the dynamics of the movement. The colour he is able to bring out (for example the sleigh-bells) is also most admirable.

Subsequent movements do not disappoint. The second movement’s sudden transportations into heavenly heights is ravishing, with some great playing from the London Symphony Orchestra despite their probable lack of familiarity of the piece. The leader in particular gives a suitably sour tone in his retuned violin and the movement as a whole is most delicious.

It is in the third movement that Britten (left) particularly distinguishes himself. It is perhaps one of the slowest on record, but also one of the most beautiful, with the obligato lines from cor anglais, horn and just about everyone played with an unerring sense of line, and more importantly in this composer’s works, depth of feeling. Mahler’s music withers and dies when played coldly – it can of course, but I would rather listen to something else than to listen to such a performance.

Britten loved this symphony, as evinced by his memoirs, and his understanding of this movement is a joy to behold. When the gates of heaven fling open in the passage with harp, timpani the effect is one of the most thrilling I have ever heard, despite the less-than-ideal recording circumstances. This recording of this movement is perhaps the most satisfying I have heard, even despite the imperfect orchestral playing.

The final Lied that ends the symphony is of greatest importance, and the hardest to get correct, as collectors of this symphony will know. For once we have a voice – Joan Carlyles’ that is suited to the movement, but alas, stage fright, probably, causes her to make a mistake in the final stanza of “Das Himmlische Leben”. Even so, this movement, played mostly swiftly, is most satisfyingly played (Britten’s conducting one of the most interesting I have heard – check out the horns in the oxen passage) and Joan Carlyle’s portrayal of the angel in heaven is most affecting. Some may find quarrels with her German, though – she pronounces her “igs”, for example, in “lustig” in the typically English dry way.

I would like nothing better than to just skim over the “encores” in the CD, but I must mention that the Lieder eines Fahrenden Gesellen is one of the most successful I have ever heard. Without forgetting the numerous other accounts, which feature singers with, in most likelihood, more suited voices for this song cycle, Anna Reynolds nevertheless sings beautifully and has great word-colouring. But the discovery of the day was Britten again. He has total understanding of Mahler’s orchestral colour. Really, one must listen to this just to, for example, listen to his choice of bell (just before “Blmlein blau” in the second song) Most delightful, to hear it done correctly, even just this once.

No caveats need to be made for the performances of the two Wunderhorn Lieder which complete the disc – Elly Ameling is in splendid voice and her qualitites as a Lieder-singer are perhaps unsurpassed.

In sum, again, a most rewarding disc, well worth the full-price (outside of Britain), or the mid-price (within the U.K) that BBC Legends asks for. Will BBC release more Britten’s extant Mahler recordings? Let’s hope so.

Derek Lim plans to retire at 50 and spend the rest of his life touring Europe – Vienna, Amsterdam and gorgeous Italy 🙂