Dvorak is most well-known for his symphonies and the Slavonic Dances. In all of these and more, the unmistakable and rich melodism of the composer is never lacking. Indeed, the Czech have always nurtured a great tradition of tuneful fertility in all forms and times, from folk tradition to Dvorak, Stamitz to Fibich, Smetana, Jancek, Martinů and so on. Personally, exploring the music of this Eastern European culture has always been rewarding to me, and I’m sure most people will agree.

The violinist here professes to having been intrigued by her father’s Bohemian origins and love of Slavic music. Born in Stuttgart in 1978 (which makes her but 22 this year), Tanja Becker-Bender has studied with Wilhelm Melcher of the Melos Quartet, and proceeded to win major prizes in Germany, USA, Belgium and Italy. More recently she has studied at the London Guildhall School of Music, as well as with Gnter Pichler of the Alban Berg Quartet. In 1998 she was awarded 2nd prize in the International Music Competition, Geneva (there was no first prize awarded that year). Having debuted with an orchestra at the age of 11, she has performed widely in Europe and America, and also in Singapore in 1999 (reviewed here).

Senka Brankovic hails from Croatia, where she was heralded three times as Young Musician of the Year. Born 1975, she was also her country’s youngest music student in 1990. Her teachers include Hans Leygraf of the Salzberg College of Music, Hans Petermandl, Heinz Medjimorec and Boris Bloch. Among her prizes are the Gonda-Weiner Prize from the Vienna College of Music and in the Bsendorfer Competition, 1997.

The disc begins with the Sonata in F. The first movement is played with bright but earthy tone, backed by forward expressiveness. Tanja Becker-Bender’s attack is impressively daring, energetic but also lyrical, if more towards solidity than fluidity. Her partner’s close playing is spirited, but more light to Tanja’s earthiness. Together they make a very appealing partnership.

The second movement poco sostenuto is like walking through the woods with sunlight streaming through the canopy. The dark earthy sound of Ms Becker-Bender’s 1761 Guadagnini evokes the living wood alongside Ms Brankovic’s rippling light – Dvorak’s melodic richness and sometimes mellow Romanticism is caught beautifully here.

The Sonata ends in merry dance-like character, showing both players’ vibrant spirit of cooperation. The exhilaration of the ending sequence is particularly impressive, displaying a great range of feeling and atmosphere, suffused with a rich palate of instrummental colours. These qualities are heard again in the Elegie of the Four Pieces, the plethora of tones suggesting the hue of sunset, the silver clarity of tears, the dark blue of melancholy, or the darkness of serene night.

The four pieces no longer retain their descriptive names, which however do shed light on their character. The quartet begins with a songlike Cavatina, here beautifully sung by Tanja’s instrument over the glitter of the piano – a simple but effective piece. Later on in the album, listen to the serene rendition of the Nocturno, which also showcases the beautifully sustained lyic vibrato of the violinist, joined by the tranquil murmurings of her fellow pianist. The atmosphere of childlike innoncence mingles with tender affection and flowing passion.

Returning to the Four Pieces: in the Cappriccio, Tanja’s fearlessly creates the stormy chords of the opening. As in the following Romanza, she has an admirable way with contrasting moods – loud sometimes violent music against quiet figures. The same qualities will be heard again in the Ballade. 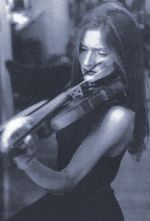 The Mazurka is a wonderful, dark folksy piece, passionate and lyrical, bouncing in triple rhythm. With not a moment’s wastage, Ms Becker-Bender launches into it with edgy energy, sharply phrased yet also warmly lyrical, and also capable of light-heartedness and humour – it is this quite amazing range of moods which the violinist so subtly achieves that impresses me so. It continues in the sorrowful Ballade, a hauntingly solemn work which begins in a kind of weary march funebre, complete with the piano’s slow bell-tolling – it reminds me of one of the more serious tone poems of the composer. The violent interlude towards the middle is sudden and quite a contrast, but also brief, before the duo return to the gothic melancholy of the beginning – listen to their deep concentration of playing at the quiet end, with violin at the tessitura.

The two final pieces on the album are familiar melodies which are made all the more refreshing in their transcripted forms, played with such spirit. Rubato is crucil to the passionate music of the Slavonic Dance, op.46 no.2 in E minor, and here we have very natural and musical readings, with human dancesteps, mischievious asides, amusing trills and other details.

The last work on record is the Humoresque, op.101/7, carefreely and contentedly played, as of a light-hearted farewell. This makes a fleeting and cheery, subdued end to the disc. But even here, subtle skill is not lacking – note yet again Ms Becker-Bender’s astonishing shift of colours – dark, dusky hues of the middle section, suddenly become bolder, more heartening, then fading quietly back to the smile-adorned feminity of the final bars. A very enjoyable – and very emotional – album indeed, full of earnestly wrought passion and dynamic poetry.

Chia Han-Leon is often awoken early at dawn, by the only other member of his house, to chase lizards.