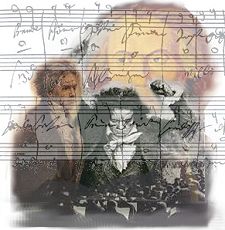 Symphony No.9 in D minor Choral op.125
An Inktroduction by Benjamin Chee

One item of note appears in Beethoven’s musical notebooks amidst work on the Eighth: an inscription, 3te Sinfonie D moll. While no sketches of any D minor symphony were found, and work on the actual Ninth did not begin till years later, this prophetic entry does anticipate the idea of a new symphony in this key. It also reveals Beethoven’s leanings in the Classical school (despite his Romanticism) in conceiving works as part of a larger body, this apocryphal symphony being the “3te” of a trilogy that began with Number Seven and Eight.

What can be said of the Ninth that hasn’t been said already ? It would be one of the most influential works of the nineteenth century – Brahms’ First, Bruckner’s Third and Fourth, Mendelssohn’s Hymn of Praise Symphones, all claim a share of inheritance from Beethoven’s Ninth. It still remains a crowd-puller at the Dresden Staatskapell’s Palm Sunday concerts at the Semperoper, a tradition that goes back to 1847, and today has become the official European Anthem.

Throughout his life, Beethoven had shown a deep interest in the work of the poet-philosopher Friedrich Schiller. It was Schiller’s ode An die Freude (To Joy) which would provide the text for the finale of the symphony. The Ode itself first appeared in 1785, and other composers had already set it to music. Schubert himself provided a setting for choir, voice and piano (Op. post 111/1, D189) and Tchaikovsky, much later, wrote it as a cantata for SATB, chorus and orchestra.

The idea of introducing voices into a symphony was one that Beethoven had thought about for a long time. He had already experimented with the form in the Choral Fantasia, a hybrid piano concerto with chorus – and the melody of the Fantasia bears more than just a passing resemblance to the Ode to Joy as it finally appears in the symphony.

The first three movements of the Choral Symphony are purely instrumental, with the chorus and quartet of soloists joining only in the final movement. Each theme from the three preceeding movements are quoted briefly before the soloist enters, heralding a new theme – the Ode to Joy – with an admonishment to “turn to sounds more pleasant and more joyful”. 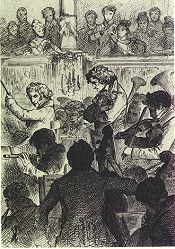 The symphony was premiered in Vienna on 7 May 1824, far from perfect (there were only two rehearsals) but notwithstanding that, still a great success. At the end of the performance, an incident occurred which brought tears to the eyes of many: Beethoven continued to beat the time, not aware of the applause given to his magnus opus, until Fraulein Ungher, the contralto, turned him around to face the people.

His turning around and a sudden conviction thereby compelled on everyone that he had not done so before because he could not hear it, acted like a lightning bolt on everyone and a violent wave of sympathy followed. It was a sobering thought: the master himself had never heard, in the physical sense, what his glorious music sounded like.