Quincy PORTER (1897-1966)
The Unpublished Manuscripts for Violin and Piano 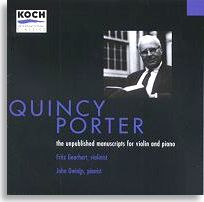 In this day and age, an unattentive listener might brush this music off as just more late Romantic/Post-Romantic work in the singing violin over rippling piano variety. But listen carefully, and you will see the very careful and firm craftmanship of the composer; how the violin lines turn and sway dreamily, intensely over its carefully crafted piano accompaniment. And in such dedicated and sincere playing from violinst Fritz Gearhart and pianist John Owings.

It would seem that this is a distinguishing point about Porter’s music here. It at first sounds just like some late Romantic work, but often veers away into harmonies and gestures which belie something more modern. The performances here have this way of being at times restlessly Romantic and emotional, yet with turns of something more deliberate and structured, which I find suits this music very appropriately.

The disc begins with three earlier one-movement works from 1919. First is the 61/2-minute Sonata in D minor – Romantic in tone, no doubt, yearning, sweet and a very pleasant introduction to Porter’s world. Gearhart plays with graceful sincerity and noble passion, in music which is regal yet carefree. There is perhaps some Brahms, something Beethoven, something Schubert.

Cleverly, these three works themselves might form a three-movement sonata. The second piece is a 5-minute Molto moderato which starts wistfully, wispily. In breathlessly Romantic atmosphere, the violin weaves poetically over the subtle piano score. “Poetic” also describes Gearhart, who in the following Allegro appasionato, delivers his phrases as naturally as one would recite or sing verses close to one. There is such an admirably musical way in his articulation, breaths, pauses and bridges. Gearhart’s skillful and individual playing begs one to hear him in a concerto.

The Sonata in E minor (1926) starts off faintly lyrical, then almost immediately turns somewhat eerie yet passionately wandering. With themes based on the interval of the fourth, the harmonies start to stray away from what would be considered clean and tonal, and then even the harmonies drift away until suddenly one realises this can’t be a Romantic work anymore. There are hints of somethng expressionist, evocatively modern, with a growing presence of Shosta-Prokofiev; but as the notes by the musicians say, “without venturing into the truly avant-garde”. In three movements, a nocturnal Lento leads into a goblinesque Allegro , filled with dark energy and trickster glee. A similar Presto concludes the Sonata.

Porter’s slower movements seem to be ones which evoke a more “modern” soundscape. Even the beautiful little Berceuse for Little Helen (his daughter) has spots and notes out of the ordinary, turning this simple lullaby into a miniature gem. Similar is the Piece for Violin (To Lois), for his wife – watch out for the dusky doublestops right at the end. Both these pieces muse just over 1 minutes each – ample time to savour their lush beauty, enough to make you miss their brief invocation. 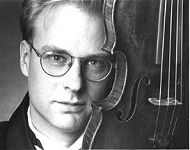 Porter’s writing is in this way pointed and concise, able to hold one’s attention. What is amazing is how often it is lyrical without being quite entirely melodic; how it uses minimal effect to produce subtle shades of light and dark, in both instruments’ part. Don’t underestimate the piano writing too, like the nervous skipping and swirling figures in the E minor Sonata’s final Presto, played with such range of expressive individuality by Owings – he has a very articulate picture of the music, and makes his part to be an equal, a peer to Gearhart’s. Owing’s role and his score are wonderfully simple but effective, and much more than just an accompaniment. Indeed, at so many points the piano propels and urges along the violin, as in the Presto.

Very admirable duet playing indeed, and in the Four Pieces the musicians makes the music seem absolutely fun to play, especially the fast-paced Rondo, with the vibrant piano skittering relentlessly beside the whirling violin. Gearhart presents solid renditions of Porter’s ferociously lyrical writing, and in the final works on the album, go on to test the listener’s concentration as the mature Porter manifests.

The Improvisation for Violin and Piano (To Lois Porter) was one of several commissions by the Julliard Musical Foundation. Exploiting the name to the full, the work has no bar lines, to which Gearhart writes, “underscores the composer’s musical aim of continuous and uninterrupted dialog between the two voices of the violin and piano.” – a point already noticeable in the earlier works, to which the duet here convey in seamless, even effortless performances.

Finally, the album presents the Variations for Violin and Piano, written when violinist Oscar Schumsky selected Porter to be the composer for a comission on behalf of the Ford Foundation. In seven movements, “[t]he piece is by no means all sweetness and light, despite the accessibility of the idiom. It has an inwardness and a near-bitterness that set it apart from most contemporary music using a similar vocabulary…” (Michael Brosen, quoted in CD notes). Here we enter into perhaps the deepest music of the composer in this album – and yet the description could be applied to all of this music.

Quincy Porter is also credited with two symphonies, a viola concerto, a Concerto concertante for 2 pianos and orchestra and ten string quartets, among other works. It is indeed strange that, with the exception of the Four Pieces, the music of this album remains unpublished (if they have been, someone please tell me). Fritz Gearhart and John Owings are without doubt on a worthy crusade, and they have made here at least one convert.