Honestly, I bought this CD because it has a nice cover. Pink and Yellow. I’ve always had a hard time selecting what to buy as far as contemporary music is concerned. There are some badly performed, badly recorded albums around, not to mention composers who will not strike a chord with you no matter how many listenings. Pick the wrong disc, and you have a disc gathering dust on your shelf for all eternity. This one certainly didn’t look boring, and I was prepared to give the music of Michael Daugherty a chance. Actually, I have heard Daugherty’s music before, on Kronos Quartet’s album Released/Unreleased – a piece called Elvis Everywhere for 3 Elvis impersonators and String Quartet.

Well, there’s only one word to describe the music of this composer – FUN. All out, rollicking good fun, tongue-in-cheek and maybe even a tad satirical. If you’re looking for serious, no nonsense, this-is-the-music-of-today, sophisticated, alarming, shocking, richly encoded with clever references and avant garde technique, then you’re reading the wrong review. American Icons is quite the opposite. This is clever stuff and it’s very American, but I don’t think you can analyze this like a Foss, Copland or Corigliano. That’s the thing, why should you? 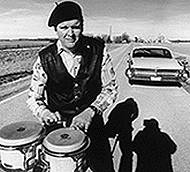 What it is: This is an anthology of Michael Daugherty’s chamber music. As it is, Daugherty has carved a niche in musical history as the chronicler of America’s pop culture. If I may, he is music’s answer Lichtenstein. Drawing his raw material from aspects of this pop culture (that is by no means strange to all of us in the rest of the world), he has composed music about Edgar J. Hoover, pink plastic flamingos found on front lawns of suburban America, Elvis (2 pieces!) and yes, Superman.

The Metropolis Symphony (1988-93) based on themes and characters drawn from Superman comics is an “absurdist take” on the Romantic symphony, and next to the opera Jackie-O (1997) is his largest symphonic work to date. The latter work, about Jacqueline Kennedy Onassis (1929-1994), is perhaps his most serious and most mature. Make no mistake, this is no young upstart playing clown in the serious music arena.

Born in 1954, he has received numerous prestigious awards including recognition from the American Academy of Arts and Letters, and fellowships from the Guggenheim Foundation and the National Endowment for the Arts. His list of teachers include Earle Brown, Jacob Druckman, Bernard Rands, and Roger Reynolds; collaborated with jazz arranger Gil Evans in New York City, then pursuing further studies with Gyrgy Ligeti in Hamburg, Germany (1982-84). His music has been performed by prominent American orchestras like LA, NY, Chicago, Cleveland, Detroit and overseas by BBC Symphony Orchestra, the Philharmonia Orches