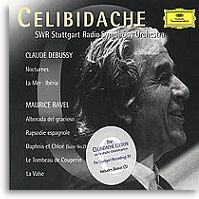 Not one of the pieces on these three discs disappoints, and from the very first note on any one of these discs you are immediately aware of a supreme master at work. If we had nothing by Celibidache other than the miraculous performance of Ravel’s second suite from Daphnis and Chlo he would still be numbered among the giants of twentieth century conducting.

Ravel suggested that Daphnis, written as a ballet, should really be approached as a symphony. It is marked by vivid characterisation and extremely adroit orchestration. Celibidache’s performance is totally organic in that every part grows out of the preceding elements – the effect to make for an intense performance of the work. It only confirms many people’s view of Celibidache as a great interpreter of French music and adds definition to Barenboim’s description of Celibidache as a magician.

Listening to these seductive performances I was constantly thinking of Charles Munch and Andr Cluytens, both masters of interpreting Debussy and Ravel. Ravel is notoriously difficult to record on disc, notably because of the gigantic orchestral forces needed and the astonishingly beautiful sounds that the orchestrations require. That these 1970s performances are so transparently presented owes much to Celibidache’s innate ability to separate textures, even in the loudest fortissimo.

This is no more evident than in the sensational closing pages of Ravel’s La Valse where Celibidache whips up his orchestra into a frenzied final waltz but is able to retain the orchestral balance enough for the themes to be savoured and the tension discharged. It is fabulously conducted by Celibidache and has to be heard to be believed. No other performance marries weight and delicacy so convincingly, not even de Sabata in a legendary recording with the Vienna Philharmonic (Nuovo Era NUOV 2219). The Celibidache La Valse is a supreme example of orchestral choreography at its most intoxicating.

In Ravel’s two Spanish inspired pieces, Alborado del gracioso and the Rapsodie espagn~ol, Celibidache avoids the mistake taken by many a conductor of making these purely orchestral showpieces. The Alborado is infectiously played, with the bassoon cadences in the central section given the Celi-rhythmic treatment. Again, one is astonished by the articulation of the playing and the delicacy with which Celibidache deftly handles Ravel’s complex, and sudden, changes of pace and tempi. The very opening of the Rapsodie seems menacing, but Celibidache’s approach is to really create an atmosphere of unrest. This then changes to a beautiful langurousness and sheen. In a word, the performance shimmers. String glissandi are beautifully captured and there is no lack of understanding what the music is about: the Habanera section is beautifully lazy, for example. The final Feria captures Celibidache at his most fiery with his orchestra playing with stunning virtuosity.

Like the Ravel pieces, Celibidache programmed Debussy often. There are at least six different versions of La Mer on CD conducted by the great man. Until hearing this 1977 La Mer I had considered his finest performance to be one from 1991 with the Munich Philharmonic (Meteor, MCD-033, coupled with an unforgettable Wagner prelude from