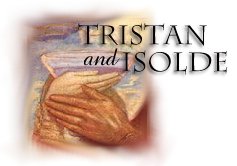 An inktroduction by Ng Yeuk Fan

TRISTAN UND ISOLDE is a very personal artistic expression. Wagner had written the libretto to the opera himself. In the Wesendoncks villa in Zurich, he had spent the mornings of August 1857 working on the text in private, while the evenings would be spent reading the days work to his audience – namely the Wesendonck couple and Minna his wife. Wagners marriage to Minna can be considered a disastrous one on the account that she saw no value in her husbands works. Thus it is no wonder he wrote that Since I have never in my life enjoyed the true happiness of life, I want to erect a further monument to this most beautiful of dreams…

It is known that a great admirer of Wagners music, Mathilda Wesendonck, and his beliefs had significant impact on this libretto and its music. And throughout the period that the composer was put up at her villa, their adulterous relationship was understatedly condoned by their spouses – on the account that Wagner was fired by this reciprocation of his talents by the sensitive Mathilda. 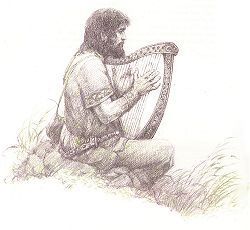 Nevertheless the relationship did not last – but unexpectedly, the concept of Tristan und Isolde continued to grow and became far greater than even Wagner himself had intended. While Shakespeares Romeo and Juliet celebrated the poetic aspects of tragic adolescent love, in Tristan und Isolde, Wagner explores all the conscious and unconscious aspects of mature adult love.

Recognisable musical devices punctuate the score of Tristan und Isolde. His profound use of strings to simulate the sea – a recurring subject in this opera – in the first and last act is nothing short of formidable. In fact I must add that Wagner is able to give the sea a moody life of its own through his orchestration, not merely just depicting a sea but making it actually believable and alive. It is so fascinating!

His intoxicating use of the oboe in the entirety of Act 3 is ingenious. Further, the uncanny way in which he repeats his musical motifs to give the entire work consistency and depth is remarkable. Wagners vocal parts are developed to the fullest extent under his hand, obviously bearing his characteristic musical watermark. But within its musical framework, he is able to draw extended developments from economic amounts of musical material. One would need weeks to analyse a score of this complexity and brilliance. But boy is it worth it! When one can sit through the lengthiness of the medium, the strength of the musical idea exponentially increases and the satisfaction is heightened tremendously. Like all other Wagner operas – one must have the luxury of plenty of time.

THE STORY of Tristan und Isolde begins rather abruptly in a ships inner chamber with Isolde, princess of Ireland, being escorted to Cornwall to be married to Marke, King of Cornwall. The joyous excitement which animates the crew as the ship approaches its goal is shared neither by the bride nor Tristan, who had wooed her for his Uncle, King Marke.

Wagner skillfully uses narratives to shorten an already long and complicated story. Through Isoldes narratives in Act 1, we are told that Tristan had killed her betrothed Morold in a battle to win the independence of Cornwall from Ireland. Though victorious, Tristan had been struck by Morolds sword and was suffering from a wound that refuses to heal. In his seeking for a cure, he returned to the defeated land under the guise of an anagramic name Tantris to seek Isolde, who is also a magician healer. There, Isolde discovers that the fragment found in her departed fiancs head fitted the notch in Tristans sword. Realising that Tantris is in fact Tristan her enemy, she approached his bed to take her revenge… then their eyes met, and the weapon fell from her hand. 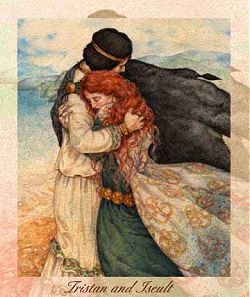 This meeting of glances, the Augenblick, followed by no words of explanation, no declaration of love, is the key to the whole drama. Later, healed and back in Cornwall, Tristan realises that his blood guilt would divide them both forever and in an act of supreme selflessness, offers to woo Isolde for King Marke as both atonement for his sins and also to suppress the enemies in the court. This brings us back to the ship in which thus Isolde had set sail to Cornwall for the unlikely marriage – bearing her own defiance towards her feelings for Tristan.

Left: “LOVE: Tristan and Isolde”. Courtesy of and Kris Waldherr. This and other paintings by the artist can be found at her Art and Words website.

Act 1. The principal action here reveals Isolde to be upset by her own self-denial and she demands that Tristan speak with her in her chamber. Tristan, still morose with guilt and pangs of love, refuses. Outraged, Isolde commits that unless Tristan drinks atonement with her, she will not descend from the ship even as it approaches Cornwall. Left without choice, Tristan finally approaches Isolde, knowing fully what atonement meant.

Unknowingly, Brangäne, Isolde’s maid servant, had substituted a love potion for the poison which Isolde had meant to drink with Tristan; but , it is not because of the love potion that the two fall in deep love; instead it is the knowledge of imminent death together that had made them obligatorily free to admit their love to each other and it is in this ecstatic delirium that they arrive at Cornwall.

Act II. Tristan and Isolde meet in a forest and there exchange their vows of love. It is here that the musical idea of the Liebestod is born and extolled ecstatically. True to tragic proportions, Tristans friend Melot betrays him and arrivals unannounced with King Marke to find the ignominious couple in each other’s arms. Tristan, unable to explain his actions to his uncle and King, tenderly asks if Isolde will follow him into death. Isolde bids him to show her the way and then, Tristan accuses Melot of betrayal and challenges him to a duel in which he allows himself (Tristan) to suffer a mortal wound.

Act III. Kurwenal, faithful servant and friend of Tristan retreats both of them to Kareol, Tristans birth castle. There, they await the arrival of Isolde, whom he had called upon to save Tristan. Almost unconscious and half in delirium, Tristan twice imagines the arrival of Isoldes ship. Tristan recounts in a long soliloquy that by healing him of his wound, Isolde had torn open another in his heart; and that the love potion having been the most poisonous of draughts to have delivered him irrevocably into the pain of longing. 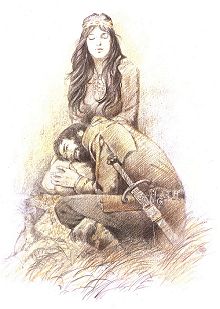 A shepherd announces the arrival of Isoldes ship. In a frenzy, Tristan tears off his bandages only to die in Isoldes arms. Isolde laments the loss of her eternally brief and last earthly happiness while King Marke and Melot arrive in another ship. Kurwenal rushes forward and kills Melot before killing himself in despair at his masters death.

But King Marke had not followed Isolde in order to battle – Brangne had explained about the love potion and Marke had come intending to unite the two lovers.

Isolde gazes in rapture at Tristan – who for her, had awoken briefly to new life – and dies. In death, she unites herself with him in the transfigured certainty of the immortality of their love.

IN THE COURSE of its performing history, Tristan und Isolde has increasingly become a vehicle for not only great singers but great conductors as well. Of all Wagners works, Tristan und Isolde, together with the Ring cycle and Parsifal, offers the conductor the most significant opportunity for an individual interpretation.

Though Wagner is often seen as larger than life, for the lovers involved and conductors who understand that – it is never a case of too dramatic nor too epic, it is always sincere and proportionate. Approaching Wagner this way, one senses a redrawing of the scales which Wagner had employed – one then marvels at how applicable Wagner could have been, applied to real life.

It must be true enough then, that unless one allows oneself to dream and imagine – one will never quite become the hero in our own lives. Understandably, few will understand the magnitude of the love and torment that Wagner himself must have suffered.

Email Ng Yeuk Fan if you can convince him of the sadness and merit of your love story he will send you the secret formula to the perfect love potion, complete with instructions how to brew and consume it. Hurry, before Valentine’s Day, and while stocks last (of one of the secret ingredients)