If listening to too much HIP Bach lately has left you jaded, come check out these marvellously un-HIP versions! This collection of two discs is in a word, a gem. I’ve listened to Andrew Manze’s account at least five times now, but each time I get to the middle movement of the Double Violin Concerto, perhaps the most gloriously blissful music, I am left distinctly dissatisfied.

This account of the Violin Concertos, with the additional Violin-and-Oboe concerto (in the Manze disc played on two violins – not a good decision, in my opinion – the lines of contrast are not brought out very well), is not HIP, as I have mentioned, hardly, but it is not sentimentalised Bach either. Menuhin and the Bach Festival Orchestra had tremendous experience together in many, many “live” performances, and it shows in their utter sensitivity to his turn of phrase. The Violin Concertos bustle with joy and vivre in the outer movements, though not adopting overtly fast tempi (I’m still recovering from Manze’s opening of the BWV1043 concerto, which resembles nothing so much as a truck running someone down). 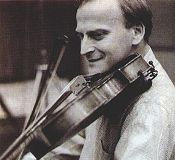 Menuhin’s beautiful tone, heard here right after his technical peak (he was always improving musically), is always a joy to listen to, and his is a direct, communicative way with Bach’s music which directly involves the listener.

Christian Ferras, in his way also a great musician, proves a worthy partner in the joyful Concerto for Two Violins, written in perhaps the happiest part of Bach’s life. The middle movement, justly famous and popular, is a utterly satisfying and despite the lack of improvisation found in Manze’s version, (and partially because Ifind the improvisations in that disc more irritating than convincing) I like this better.Give me vibrato, no improvisation but consistently communicative Bach any time over the virtuostic performances which don’t try to involve the listener. Here is Bach where the music has time to breathe and bloom. The Concerto for Violin and Oboe, also in D minor, is also beautifully played, and Goossens’ silvery oboe tone is a highlight here.

The Orchestral Suites reflect similar qualities of expansiveness, though not to the point of loss of rhythmical propulsion, and letting the music breathe (the Bouree I and II is, for example, lacking in none of those qualities and is both rhythmical and with a joyful swing). More Romantic in conception than you might be used to, but a different, and rewarding experience all the same, and well-played. The orchestra is not too large, and responds to Menuhin’s style.

Menuhin takes each movement on its own, it seems, but at the same time each Suite’s own character is brought out well. Unfortunately only three of the Suites are included here, but even then, this is a wonderful collection. The recorded sound is very good, and the textures are never thick and mushy. If you don’t have a version of the Violin Concertos, then I say, you could do far worse than to pick up a copy of these CDs.

It took Derek Lim is of late very irritated by those handphones which use Bach’s wonderful music, especially, for example, the Badinerie from the second orchestral suite.

Back to the Classical Index!… or read previous Bach reviews and features at the Inkpot