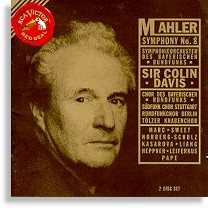 Reaching for the unreachable. Aiming for the unattainable. These words sum up my overall vision of Mahler’s Eighth, but also in a rather stranger way, my assessment of Sir Colin Davis’ performance of the Eighth. As a conception, it certainly has many interesting ideas which work. On the purely conducting level, it has many highlights – the beauty and variety of string colour, brass colour and other subtle, subtle details.

Davis’ conducting of the first movement I find a mid-way between taut and flexible, which is to say that I enjoy his holding on to the reins sometimes, and his very good control of the overall proceedings in the coda of the movement. His is not an interventionist approach, despite the early intimations of such. For example he effects an unwritten ritardando before figure 3 (Spiritus, O Creator). He generally doesn’t push the music, which is good. But he also doesn’t effect the same measured amount of accelerandi and ritardandi in this movement, in the same immediate, instinctive way that Mahlerian conductors would. One telling moment is the ritardando before figure 17 (Allegro impetuoso), which isn’t as natural as it could be, nor is the following passage as impetuous as it could be. Another one: at figure 37, where Mahler asks for a molto rit. Davis gives a relatively mild one, which reduces the impact of the next figure, the immense A-ccende lumen sensibus, where by the way the double ‘c’ is pronounced more as an ‘s’ than the usual ‘ch’. Elsewhere, the double fugue is quite well-executed, though I find occasionally tension flags.

This is purely in the conducting department. Where the male singers generally acquit themselves, nay, they pass with flying colours, I can’t say the same for the ladies in the team. Except for Kasarova’s pretty controlled mezzo, I find the rest of the team terrible. Test for instance (this should be easy) the opening (and very crucial for the morale of the proceedings!) Imple superna gratia where Alessandra Marc proves really terrible, right from the opening. Indeed it is one of the, if not the worst examples of this passage I have performed. (If you have your own nomination please tell me…) Terrible singing. Marc has a vibrato you could drive an SAF three-tonner through. In addition she can’t sing on pitch (but how could I tell anyway?) and she can’t sing pianissimo. So what was she doing singing the first soprano part? I might be exaggerating when I say this, but I think there would have been at least one chorus soprano who could have sung more beautifully than Marc. Sharon Sweet’s voice is similarly not that palatable. Thus for an amazing sound of fabulously bad ensemble singing, one should try the “Gloria, Gloria” after the boy’s choir (secure, very good singing here) sings. (figure 83)

The ending of the first movement, is as I said earlier, impactful, and Davis brings out the voices well. Overall though, I start to agree with someone I know who said while listening to the first movement of the Eighth that it sounded nothing so much as a screaming match. I haven’t mentioned the choir – they sing securely and with great merit, and good diction.

Second part now. Colin Davis takes a very slow tempo at the beginning, which can sound sonnambulant. (the marking is poco adagio, which to me points to a faster-than-usual adagio). Davis sounds a little ponderous overall in this orchestral introduction, which nevertheless is still quite evocative. He likes the long-drawn sighing sound, and throughout the initial part one gets lots of this. I can’t say I dislike the effect totally, but it does have a tendancy to drag at first. Later, Davis moulds the whole instrumental section most imaginatively. The choir is excellent in their quiet entry (This recording was made over two performances; to me, their level of accuracy is stunning.) The baritone’s entry at “Ewige Wonnebrand, glhendes Liebeband” is very involving, and well sung, and the bass after that is equally at home with this music. The boy’s choir sing like little angels. Ben Heppner could be the single best tenor I have heard in this music – not pinched, not overtly strained by the music, though he resorts to a scoop in “gebietest”. So it is sad that the whole of the second movement is marred by the always present problems from the ladies section. The huge vibrato that I was complaining about hasn’t disappeared, and this renders whole sections unlistenable. In the “Neige, neige” section, things are really bad, and Una Poenitentium really deserves her penance. Nowhere is there any indication they have looked at the directions: “warm” and other clear instructions are just sung over. Surely this is not the best cast of Soprano I and II available? The earlier threesome is similarly marred by scooping and bad singing. One saving grace is that the Mater gloriosa is not badly-sung.

Davis tends to take an operatic approach to the sections between “arias” and I find this Wagnerian approach and flexibility most appealing. His understanding of the ebb and flow of the music is also most impressive. But even he can’t effect as huge a crescendo as Horenstein, nor does he have the quick change of mood at figure 218, after the great choral ending, where Horenstein effects a totally triumphant mood by actually increasing the tempo here. (The marking is Fliessend, or fluent). Disappointingly, a lot of conductors don’t show any understanding of the difference between this marking and the later Pesante (heavy) at figure 220, thus spoiling the unfailing sense of theatre Mahler had. Neither does Colin Davis do this. The finale is grand, with the huge tam-tam washing over the proceedings. Despite all my caveats, one can tell this is a warm performance which is lovingly moulded in places, but again still lacking in a true Mahlerian touch.

Davis doesn’t have everything it needs, despite all his choral music experience, in my opinion, to handle Mahler’s great choral symphony. If the Sixth had riddles that only people who had solved the first Five could understand, then the Eighth has riddles only really seasoned Mahlerians can understand. When conducting this symphony, I believe one should forget about the later output after Mahler had composed this symphony, i.e. Das Lied, the Ninth Symphony etc. This is Mahler at his most self-confident, most self-assured, the Mahler who was at the time at the absolute peak of his powers and rising, in music the sole commander of the “music of the spheres”, with the stars and planets in motion. This is Mahler, reaching for the stars.

Mahler: Symphony No.8 – An Inktroduction

In Singapore, this disc is available at or can be ordered from Borders (Wheelock Place), Tower (Pacific Plaza & Suntec City), Sing Discs (Raffles City) or HMV (The Heeren).