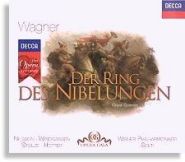 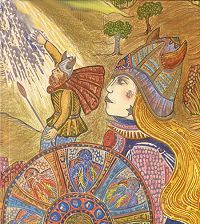 KA-POW!!! Like Thor’s mighty hammer blow, that was how this disc hit me, a Ring initiate and probably on my way to being Wagner’s newest convert; AND maybe soon to be taking that One Great Step every classical music enthusiast inadvertently must think about – Buying Solti’s Ring (a.k.a Wallet-dmmerung)

The disc begins with the epic “Entry of the gods into Valhalla” from Das Rheingold. Donner (equivalent of Thor) summons a great storm to clear the atmosphere, and then – ING! goes his hammer, sparking a bolt of lightning followed by rolling thunder. The clouds part to reveal, to heavenly music, a rainbow bridge. Throughout, the Vienna Philharmonic demonstrate vast ranges of colour, dynamic and supreme dramatic nuance, courtesy of the late Sir Georg Solti’s inspired direction. Wotan (equivalent of Odin), chief of the gods, sings a poetic greeting to Valhalla before inviting the gods to enter. Loge, god of fire, refuses to join them, while in beautiful offstage acoustics the Rhinemaidens lament of the loss of their Rheingold in quite melodious fashion! Legendary as Solti’s Ring may be known, it must be heard to be believed, and this opening track makes a most impressive introduction to this introduction.

The Ride of the Valkyries
Abridged libretto, updated for 1990s by Chia Han-LeonGerhilde: Yo! Here, Helmwige, bring your horse here.
Helwige: Yo! Coming up!
Ortlinde: Park your stallion next to my mare – he’ll enjoy grazing with her.
Waltraute: Who’s that hanging from your saddle?
Helmwige: It’s Sintolt the Hegeling.
Schwertleite: Oops. Then you’d better park elsewhere ‘cos Ortlinde’s mare is carrying Wittig the Irming.
Gerhilde: Yeah, Sintolt and Wittig hate each other.
Ortlinde: Tsk, tsk – my mare is already being jostled by the stallion. The warriors’ quarrel antagonises the horses too.
Waltraute: Yo, Siegrune! Where have you been, woman?
Siegrune: There was work to do – are the others here?
Incoming Valkyries: Yoo-hoo! We’re here!
Present Valkyries: Yo! Welcome!
Incoming Valkyries: Yo, gals!
Present Valkyries: Yo! Come on in and park your mares in the woods – keep them apart until the dead men finish bickering. Welcome! Welcome!

With apologies to Wagner and Wagner-fans.

But wait! Hark, what do I hear in the distance? To the insistent and thunderous buffeting winds of the horns, the Valkyries (“Choosers of the Slain”) gather on a rocky mountain summit, preparing to ferry the bodies of fallen warriors to Valhalla (“Hall of the Slain”), to feast, fight and await the day of the gods’ final apocalyptic battle, Ragnarok. We are about to witness the famous Ride of the Valkyries from Die Walkrie. As the Valkyries approach, they converse in what must be Valkyrian occupational chit-chat, greeting each other with their ringing “Hojotoho!”s and bird-slaying helden-song. Particularly stunning is the shockwave-vibrato executed by Berit Lindholm as the valkyrie Helmwige, as she hollers at the top (in more ways than one) of her voice during the first big climax.

Continuing with their perfectly ordinary Nordic discussions, these magical flight stewardesses, powered surely by the mightiest BMW/Rolls Royce aeroengines, gossip about the companionship preferences of their B-52 horses and their body count of the day (i.e. the warriors they “picked up” today – ha ha). Wow, it’s like women coming back from shopping…

But I jest. The tremendously HUGE firepower of these heldensopranos are wondrous to behold. Surely, after hearing them, the listener cannot but pay much more respect to those old B&W photos of not-particularly-slim, chainmail-clad, horned and enhelmed, and spear-armed supersopranos. I imagine that just by singing with their maximiser voices alone, these berwomen could down F-15s and disrupt communications satellite orbits. Did I mention these women must be huge? 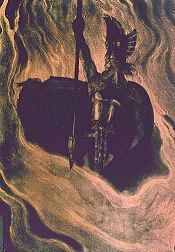 Next on the line-up is the Magic Fire Music from Die Walkrie – Wotan summons Loge to conjure a circle of fire to imprison the valkyrie Brnnhilde for protecting Siegmund against his wrath. To the flaming tremolos of the strings and the wavering fires of the woodwinds, the orchestra paints a vivid picture of the burning ring arising. Tempering his anger at his favourite daughter, Wotan has decided to merely send her into deep sleep within the fires. Only he who stands brave before Wotan’s spear can pass through the flames to reach Brnnhilde. Magically, the fire music softens dreamily, depicting Brnnhilde falling into slumber.

Siegfried – the universally recognised name always invokes a reaction of heroic admiration. No really, just say the name to anyone with an inkling of the arts. A friend of mine once attended a production of the opera, didn’t understand a single word, but was bowled over anyway. But probably most people may not realise that our hero is the bastard son of the siblings Sieglinde and Siegmund. Never mind. In the dramatic Forging Scene, Siegfried is seen in creating a new weapon from the smelted remains of Wotan’s magic sword Notung. In between scolding the original for breaking and urging the bellows to blow harder on the fires, Siegfried’s sings with almost delirious intensity, symbolically employing his mighty voice in the act of creation. Wolfgang Windgassen is a match for Wagner’s mighty music. Listen for the sizzling cymbal roll as Siegfried plunges the red-hot steel into water; or the authentic hammer clashes depicting Siegfried hammering the metal into shape; and the brassy finale when Siegfried cleaves the anvil he has created his new sword with.

Doing an about-turn, Siegfried/Windgassen now sings wistfully and sadly for his lost mother in the tender Forest Murmurs. A soft breeze seems to waft through the dawn-lit woods as laments on her dying to give him birth. Hopeful that the birds will give him some answers (they do later), Siegfried makes a flute from a reed and pipes in dialogue with the birds. This is a relatively short, 5-minute piece, but atmospherically and serenely delivered by the Vienna forces.

Gtterdmmerung – The Twilight of the Gods. Siegfried has been killed – our tour of Wagner’s epic drama continues with the grim-heroic procession of Siegfried’s Funeral March. This orchestral interlude showcases the various leitmotifs used by Wagner in the Ring to symbolise various dramatic elements. 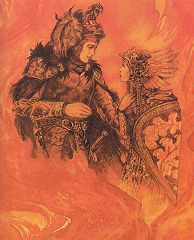 The March opens with a low murmuring section, before, with almost weary pain, the Death motif is pounded out on brass and timpani, with basses growling in support. The Sword and Siegfried motifs are laid out in heroic splendour, celebrating and inscribing in those gathered the nobility and tragedy of their circumstances. The Vienna Philharmonic is distinguished by their truly dark and grim tone of music-making, matching the mood perfectly.

In the single longest sequence on this disc, the famous apocalyptic Immolation Scene, Birgit Nilsson (always our favourite) is the defiant heroine Brnnhilde, ordering for a funeral pyre to be built for her lost love. After paying her final tribute of love to Siegfried, she curses Wotan and the Ring, which she retrieves from Siegfried’s hand and puts on her own. Finally, Brnnhilde sets fire to the pyre before entering it herself to join her love. Valhalla is consumed, as the world is readied for new generations. The ring thus comes full circle, and I assure you, this disc will have you coming round back to track 1 again.

Return to the Classical Index!…
or Visit the Inkvault archives!