A Cremonese Conspiracy? With a comparison of performances by
Corey Cerovsek and Maxim Vengerov

Most musical instruments live in constant anxiety. It is rumored that a piano-tuner once reported that whenever his notoriously finicky Steinways resisted tempering he had only to whisper the name of Vladimir Horowitz to have all the strings simultaneously quiver into tune, and I myself have seen a mature, sturdy Bsendorfer tremble at the approach of Lazar Berman.Left: Paganini’s “Canone”

Not so the stringed instruments. The recently deceased novelist Mario Puzo might have celebrated the misdeeds of the Corleones in his Godfather novels, but in terms of capacity for intrigue the Corleone family have been amateurs in comparison to the string family. Anton Chekhov, a great music-lover, was among the first to recognize that when a princess and a musician have to be brought together in a comic romance, one should leave the necessary ruses up to a member of this family (hence the enduring charm of Romance With a Double Bass). Stringed instruments have hatched plots that have lasted centuries: by about 1650, for instance, they decided to transform the small Italian village of Cremona into a factory for their own manufacture. The sweet-toned instruments made by Niccol Amati (1596-1684), the bright, beautifully-balanced sound of those fashioned by Antonio Stradivari (1644-1737), and the character and tonal variety of those of Bartolomeo Guarneri (1698-1744), have never been equalled by those made anywhere else.

It would have been poor planning, however, merely to create great instruments and not the performers who could bring out their extraordinary and distinctive characteristics. Thus, two great schools of violin-playing eventually emerged and have produced almost all the great performers on these instruments (although on occasion, a Stradivarius or Guarnerius has been known to flirt with superlative performers of lesser pedigree).

The first of these schools was established at the Paris conservatory by Lambert Massart, who trained great teacher performers like Henryk Wieniawski and Eugne Ysae (and later Fritz Kreisler). For a while Wieniawski taught in Russia, and his younger colleague Leopold Auer presided over a school which emphasized virtuosity and a perfection of sound over its Western European counterpart exemplified by Ysae’s intellectual and highly personal approach. Ysae’s student Josef Gingold carried both his style and his penetrating interpretive insights to the United States, eventually passing them on to a generation of violinists he trained at Indiana University. Auer’s methods have until today remained the bedrock of Russian violin-playing. Within a generation, however, his students (among them Mischa Elman, Jascha Heifetz and Nathan Milstein) brought the style to New York, where it found a home at the Julliard Conservatory.

Thus, ever since Bartolomeo Guarneri invoked divine aid (and so acquired the nickname “del Ges”) by inscribing a small cross on an inner surface of his instruments, every generation has been supplied with performers of a calibre adequate to the exacting standards of the Cremonese instruments. (The picture on the right is of an inscription by Giuseppe Guarneri del Ges, Bartolomeo’s grandson). Of course, in the spirit of rivalry, the instruments seldom agree on a performer (as they did with the inhumanly perfect Jascha Heifetz). The legendary Niccol Paganini, famed for his big sound and ability to exploit the tonal contrasts between strings, called the 1742 del Ges which had chosen him “The Cannon” (the City of Genoa, to which Paganini bequeathed it, once in a while lends it out to violinists like Salvatore Accardo).

The later del Gess, oozing with personality, found their way into the possession of highly individual performers like Wieniawski and Ysae, and have been played regularly by Menuhin, Pinchas Zuckerman and Gil Shaham. Mischa Elman’s feathery vibrato and singing tone were invented for the Strads. Indeed, Auer’s students and performers of the Russian School are generally at their best with the bright-toned Strads, and many of the Julliard graduates (Itzak Perlman, for instance) can be counted among their devoted adherents. 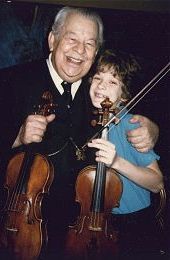 Naturally, the two most promising players now in their twenties are exemplary representatives not only of the two great traditions of violin playing , but also superb exemplars of the virtues of the different instruments. Born a few months apart, Maxim Vengerov and Corey Cerovsek have exceptional pedigrees, Vengerov being a product of the Russian School, having studied with Zakhar Bron, while Cerovsek was a pupil of Gingold at Indiana. Both have expressed their admiration for the Guarneri violins, but there seems to be little doubt that the flamboyant and direct Vengerov belongs to the Strads and the thoughtful (and no less technically-accomplished) Cerovsek to the del Gess. Perhaps the best illustration of this can be found in two compact disc recordings, made a few years apart but encompassing similar repertoires, in which Vengerov plays the 1727 “Reynier” Strad, and Cerovsek the 1742 “Wieniawski” del Ges.

The comparison may not be entirely fair since Vengerov’s recording was made more than five years before Cerovsek’s, and for performers at that age such a span can well appear to be worth half a lifetime in artistic maturity. And indeed in the Wieniawski pieces they both play, all the odds seem heavily stacked in Cerovsek’s favor (not least because the Delos engineers tend to use fairly forthright microphone placements, something for which one is grateful if one is studying to the way a del Ges responds to an impressively wide variety of bow-pressures and vibrati). 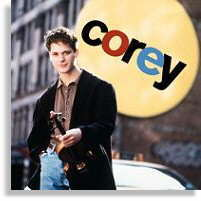 A particularly telling advantage Cerovsek enjoys in the comparison results from Wieniawski’s fondness for complex bowing and for exploiting the tonal contrasts of the different strings of the Guarneri instruments, for it is Wieniawski’s own del Ges that Cerovsek uses for his recording. Even the introduction of the D-major Polonaise makes the difference obvious: after a rather unpromising thumping accompaniment by Itamar Golan, Vengerov produces a bright, penetrating tone that seems to cleave its way up to the high notes with fierce portamenti; Cerovsek uses far more rubato before easing into the portamenti, and he relaxes the bow pressure while doing so, producing graceful slides and whispered high notes that play marvelously with dark sound of the lower strings.

These characteristic slides, incidentally, are found in both Ysaye’s recordings and Gingold’s (although to my ears Cerovsek’ sound even better), which alerts to another of the felicities of Cerovsek’s playing that results from a particular artistic tradition – this one stretching all the way back to Massart. It is a tradition which also emphasized carefully thought-out and deeply felt interpretations, even of music which, as with Wieniawski’s, we have come to regard as being rather slight. In the central section of the D-major Polonaise, for instance, Vengerov merely appears to go through the motions of striving for contrast, while Cerovsek appears to have a Romantic mood swing, fearlessly engaging with the broad sentiments of the piece (a positive asset to Wieniawski’s original audiences, if somewhat out of favor nowadays). 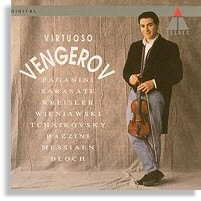 Much the same can be said of the two versions of the effusively melodic Lgende. It is not often that a piece that one violinist plays in 6 minutes takes a minute more in another’s version, but this is exactly what happens since Vengerov treats it as a technical showpiece, bringing out the wonderful, singing quality of his Strad in a shower of double-stops, while Cerovsek integrates the virtuostic elements of the piece into a larger narrative conception (a love-letter that is at once proud and pleading, one imagines).

This sense of a more fully-worked out interpretation is certainly augmented by the contribution of Cerovsek’s frequent partner, his Nannerl (in the form of Katja Cerovsek). It certainly takes a pianist of considerable flare to take the opening of the D-major Polonaise (a series of repeated notes) and actually turn it into a convincing lead in for the pretty violin figure it introduces. Moreover, it would be unlikely that a pianist less familiar with Corey’s playing would so nimbly manage the high-speed syncopations of the A-minor Caprice (in Kreisler’s arrangement) or the lightning changes of tempo in the “Faust” Fantasie. 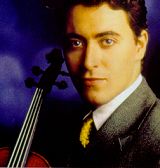 This is not in any way to disparage Vengerov’s playing, which for a twenty-year old shows exceptional tonal refinement. Nor is the young Vengerov incapable of digging into the depths of the music. He shows himself fully capable of exploiting the poignant, vocal middle register of the Strads in a version of Kreisler’s Caprice Viennois which – dare I say it? – is even more tender and graceful than my prized 78rpm recording by the composer himself. But nowhere does Vengerov show what might be to come as well as in the passage of Bloch’s Baal Shem known as “Nigun.” Here there is a certainly a degree of passion lacking in the encore pieces, and for once Itamar Golan shows really how fine an accompanist he can be, contributing dreamy clusters of notes and atmospheric tremolos to a passionate, well-integrated performance. 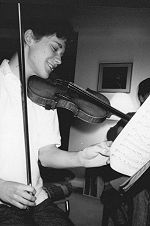 Nevertheless, it could be argued that “Nigun” shows both the virtues and the limitations of such a recording, which consists for the most part of a potpourri of display pieces (in contrast to the thematic unity of Cerovsek’s recording). Here it should be noted that Teldec’s policies might have as much to do with the choice of repertoire as the performer’s inclinations. Vengerov is a natural showman and was groomed from the start for stardom, quite unlike the thoughtful, introspective Cerovsek whose fondness for Wieniawski has not prevented him from getting rave reviews for his performances (under Michael Tilson Thomas) of the Alban Berg Concerto, a work of a high conceptual order. Of course, one might also argue that Cerovsek’s Wieniawski album could be too much of a good thing, because like all performers of the first order he makes lesser pieces sound almost as great as the truly distinguished ones, and Wieniawski, for all his melodic gifts and abundant charm, is unlikely to be everyone’s cup of tea.

Even so, if I were in the business of reading tea leaves, I would feel confident that these remarkably talented young musicians are soon going to ascend to the exalted positions in the world of music so far reserved for the likes of Perlman and Zuckerman. It is a refreshing sign of an increasing musical pluralism that violinists with two such different styles and musical temperaments are favorites with the best of today’s conductors. With the technical mastery that is already theirs and every evidence of growing artistic maturity, one can rest assured that the miraculous Cremonese instruments will continue to be in safe hands in the next generation.

Anthony Guneratne has left the Empire.

Back to the Classical Index!… or read previous violin features at the Inkpot