My first encounter with Nathan Milstein happened a few years ago when I purchased his 1973 recording of Tchaikovsky’s Violin Concerto. I was captivated by the playing of the soloist right from the start; glowingly sweet and full of mundane feelings yet always sublime and never over-romantised. There was also a smoothness and cosy warmth which I never found (and indeed has yet to find) in others. I was overwhelmed. Since then I have always kept a keen lookout for any recording of his. So when EMI reissued this mid-50s monoaural recording of Beethoven‘s and Brahms’ Violin Concertos on compact disc, I snapped it up without thinking; and I was not disappointed. 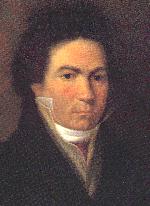 Beethoven wrote his only violin concerto in 1806 which was duly premiered in the same year by Franz Clement, principal violinist of the Theatre an der Wein, who, back then, was a popular figure with the audience. It is primarily not a virtuosic piece, though immensely technically demanding; instead it is one that is noble, lyrical and serene with none of the heroic struggle as in his Third or Fifth Symphonies. In spite of being only fairly received by critics and audience initially, it slowly established itself in the concert repertoire and is now regarded as a touchstone of every violinist’s art.

Written some 72 years later, the violin concerto by Brahms is also his only contribution to this genre. Like his D minor Piano Concerto (No.1), the orchestra in this work plays the role of an equal symphonic partner, and one which continually challenges the solo instrument. In the light of that constant dueling, it is understandable why the great conductor Hans von Blow once remarked the work as a “concerto against the violin”. Nevertheless, its statue was recognised almost immediately and has since then become an indispensable piece of work at the core of the concerto repertory.

The name William Steinberg (1899-1970) is seldom mentioned nowadays. However, back in the 60’s and 70’s, he was a prominent figure in the American musical scene, holding such important positions as the musical director of the Boston Symphony Orchestra and senior guest conductor of the New York Philharmonic. Born and raised in Cologne, he went to the local conservatoire to receive his musical education. Later, he became an assistant of the great German conductor Otto Klemperer at the Cologne Opera for a year, before moving elsewhere to build his conducting career.During the Second World War, he was forced to leave Germany due to his Jewish roots and traveled to America where he met Arturo Toscanini and promptly became his NBC orchestra’s deputy conductor. The Pittsburgh Symphony Orchestra featured in this recording was one of the few orchestras he conducted regularly from the early 50’s to mid 70’s.

Milstein’s readings of both concertos display such unerring sense of command, urgency and architectural awareness; the results are revelatory. There are a few remarkable aspects about his playing that makes it such a joy to listen to: his phenomenal technique, his economical using of vibrato (the wavering effect of tone) and his rather substantial use of portamenti (gliding between notes). Lesser players would have misused them to hide intonation inaccuracies or sentimentalise the music, thereby trivialising the emotive content of a work. Milstein however, by imposing caution and restraint on their usage, actually brings out a greater depth of sublimity and mellowness without sacrificing any technical excitement in the process; all of that in an affectionate, lyrical manner.

In the first movement of the Beethoven Concerto, Milstein opts for a somewhat forceful entrance after the lengthy orchestral introduction, thus securing his own stand whereupon he sets the agenda from then on. For those who are used to the more feminine approach, as that of the famous Perlman/Giulini collaboration for instance, Milstein might seem rather intrusive here. That however is only surface deep, for his meticulous care for the subtleties more than compensates that apparent insensitivity. 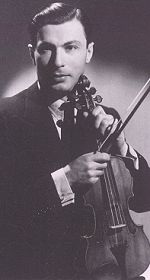 And then there is that richly warm silvery tone which would melt even the coldest listener. Be it suspense, mystery or triumph, a smooth flow of the uprising sequence of events is always ensured. The moderately paced Adagio has an expressively poetic but unsentimental edge, which I find both soothing and moving. In the last movement, Milstein’s affection for this concluding Rondo shines through, with his insightful playing that is at times witty, humourous (in a Haydnesque fashion), energetic, and not to mention the ever-present nobleness.

The Brahms Violin Concerto is given a warm and impassioned treatment. Milstein plunges straight in, after the orchestral exposition, in a way noticeably softer, less fiery but also more eloquent and passionate than most, in one long unbroken breath. Constantly creating room for the soloist’s interpretative freedom yet maintaining his orchestral posture, Steinberg proves to be a willing and worthy accompanist, though the orchestra does make a few flubs every now and then.

I’ve always liked performances of concertos where soloists use their own cadenzas, as in the present recording. Milstein’s own cadenza is pretty classical in feel, with its technical brilliance Paganini-like, but the Brahmsian spirit is always intact and flowing. The slow movement is well=played with an added poignancy, though I sensed a slight degree of self-indulgence on the soloist’s part. The final movement contains some amazing feats of virtuosic display with Milstein effortlessly overcoming those difficult double- and triple-stops, with an extended relaxed mood of joviality, before bringing the entire piece to its triumphant conclusion.

This newly refurbished recording attests to Milstein’s mastery as a violinist and as an interpreter of works of Beethoven and Brahms. Overall, though his playing may lack the ultimate incisiveness, it is more than made up by noble grandeur and lyricism. The monoaural sound is full-bodied and revealing with the orchestra warmly placed behind the soloist, thanks to EMI’s “Full Dimensional Sound” remastering technique. In short this recording is a must-hear not only to lovers of music of Beethoven and Brahms, but also to all classical music fans.

Readers might want to note that this CD is not always available in shops here; it is very likely that they will end up ordering either through the shops or the Internet.

Roy Chan would like to be a fiddler, but not on the roof.