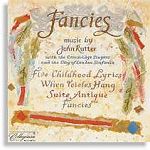 Titled Fancies, the music herein are short pieces collected around whimsical themes. Rutter allows himself the pleasure of putting ‘ fleeting ideas, dreams and whim that flit like Will-O’-the wisps’ into fruition in the form of music. In doing so – he mirrors the fondness of Elizabethan composers Weelkes, Wilby and Morley in their settings of poetry revolving about such vagaries. Rutter takes his text from notaries such as Shakespeare, Thomas Campion (1567-1620), the eternal Edward Lear (1812-1888) and others. Each not lasting more than 4 minutes, there is a lot of musical extravagance. This further captures the unsettling essence of such impulses – everyone who is vaguely creative will understand that ‘fancies’ do have an ability to pull at the heart strings – a kind of dim wilfulness accompanied by fluffy moodiness. I too, must not elucidate this further…

Left: Detail from ‘The Magic Apple Tree’
by Samuel Palmer.

Throughout this album, there is a hint of a more conservative choral style, with less of the commercially successful devices. In fact – it is ironical but not surprising that Rutter’s fancies (the idea) should come across as more serious than his serious music! His choral style in these short works reveal a more robust inner voice than his commerical successes. Hear “Icicles” and “Winter wakeneth all my care” in the suite When Icicles Hang – one can detect an earnest Rutter voice that I believe represents the Rutter musician. In fact, his use of the voice is entirely fascinating in the entire suite! This is astounding music.

Less so, but still special are his Fancies (the Suite). It is instantly captivating from the first movement till the last. Rutter captures the aforementioned fleeting spirit and throws me into a distant mood, images pulsing by – never lingering long enough but leaving dashes of colour and sound. Hear the “Urchin’s Dance” – you must certainly agree with such delightful writing.

Two of the Five Childhood Lyrics were songs I sang in choir when I was 16. “The Owl and the Pussy Cat” and “Sing a Song of Sixpence” must surely be part of many a childhood. I recited them in kindergarten blur, I sang them with youthful relish and I still find them enjoyable now in my adulthood! They are first-class choral arrangements and indeed Rutter captures the efferverscent and the child in Lear with his treatment of these evergreen limericks. Caroline Ashton has a remarkably boyish soprano voice that is apt for these lyrics. I love that tone very much.

Rutter’s “Fancies” (the album) encompasses a large palette of styles; in the Suite Antique, he marries quite some jazz together with the comparatively ancient harpsichord. Set for flute, harpsichord and strings, the two soloists – Duke Dobing and Wayne Marshall – have much synergy and the entire set is energised by their presence. Rutter (right) sometimes comes dangerously close to sounding cliché in this work but is saved by the persuasiveness of the whole set.

Recorded in 1991, there is a mild compression of the choral sound into the central channel, losing a little of the clarity and spaciousness expected of modern recordings. The Cambridge Singers are as usual, remarkably clean with ensemble work, sporting a beautiful choral tone and producing effective music under the direction of John Rutter, who conducts without surprises – his pacing and interpretation is entirely convincing.

This is a very intelligent production despite its kiddish title/subject and childish cover (which I find creatively pleasing!). In all it puts one well in the mood for this music, which Rutter achieves through the universal appeal of his creative voice, intelligently fusing serious musical purpose with very attractive and approachable style. What an interesting album!

Ng Yeuk Fan remembers Miss Muffet, who was chased by the Woman who lived in a Shoe to give up her cereals to Tommy Tucker, who plucked out a spider from his pie…Eh, or was it the woman with the empty larder…