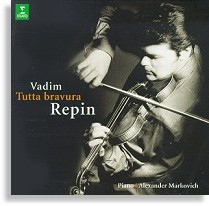 Vadim Repin plays on a A.Stradivari ‘Ruby’ violin (1708) by kind permission of the Stradivari Society of Chicago.

After listening to Li Chuan Yun in a recent concert (reviewed here) playing (the variations on the theme) Nel cor piu non mi sento, I decided to search for a recording. I was pleasantly recommended this recording. I have had the opportunity to hear Vadim Repin ‘live’ in a Shostakovich Violin Concerto a couple of years ago with the SSO and even bought his recording of the Shostakovich No.1 and the Prokofiev No.2 with Kent Nagano conducting (Erato 0630-10696-2).

Vadim Repin won the prestigious Wieniawski International Competition at the tender age of 11. Later at 17, he triumphed at the Reine Elisabeth Concours. He studied with Professor Zakhar Bron, said to be one of the foremost Russian violinists since the likes of Heifetz, Oistrakh and Milstein. Repin has worked with conductors the likes of Nagano, Boulez, Marriner and Temirkanov. He has also performed in recitals with Boris Berezovsky (Wow, I would love to hear this twin partnership ‘live’), Bella Davidovich and Markovich. He has won the Diapason d’Or Choc du Monde de la Musique Terama, and was highly praised for his recording of the Ravel Sonata No.2 and the Medtner Sonata No.3 “Epica”, (with Berezovsky, Erato 0630-15110-2).Alexander Markovich is a fitting and able partner, having already done so for distinguished violinists like Maxim Vengerov, Ida Haendal and Julian Rachlin. Entering the Gnessian School (Kissin’s former music school) at the age of six, Markovich has gone on to win the Fourth Prize at the First Rachmaninov Piano Competition.

While a studio recording pales in comparison to a ‘live’ performance heard in the concert hall, one has to give credit to the young Repin who dares to tackle Shostakovich. His playing continues to grow and his coming recordings will be most interesting to listen to.

While many collectors might buy a CD for the violinist, the pianist is often forgotten. But I find that the latter can make or break the performance for the soloist. If a pianist decides to take a backseat role, the performance could become lacklustre and mundane.

For the violin enthusiast, this is a dream CD representing all the outstanding violin greats comprehensively covered (with the exception of Ysae and Vieuxtemps). From the very first piece, Repin kicks off these showpieces with gusto and panache. Of the eleven pieces on this disc, nine are composed and arranged by virtuoso violinists with the exception of the pieces by Ponce and Tchaikovsky. Nevertheless, when one listens to the Tchaikovsky Waltz-Scherzo, there is no forgetting his Violin Concerto, one of the most difficult pieces for the violin.

The Waltz-Scherzo in C major is a personal favorite of mine. I was first introduced to it while watching the second round of a Tchaikovsky Competition where Ilya Kaler trounced the field with his strength, vitality and pure Russian spirit. The work has since become one of my personal favourites. Repin does justice to this piece just as well, although he does not take it at the speed which Kaler does (which to me seemed almost superhuman). Nonetheless all the salient points of the piece are well-articulated and presented.

In the Wieniawski, the brilliantly gifted Repin really shines out; it is no wonder that he is a winner of the coveted Wieniawski Competition prize. This disc displays all the violin techniques possible, demonstrating breakneck speeds, portamenti, vibrato, spicatti and pizzicati – all done with finesse.

For the Paganini-lover, there are three pieces of extreme dexterity. Paganini, always the showperson, often composed works which were more like stunts for the violin. At the time of these compositions there was no other who could replicate his feats. The Variations on the theme “Nel cor piu non mi sento” from Paisiello’s La Molinara (arr. Vasa Prihoda) brings out the best in a violinist. It is terribly difficult for the fingers, with the intricate filigree, ricochet spiccati plus left-hand pizzicati, which can be utterly disastrous for a lesser violinist.

Repin (left) shows us why he is world-class with just this piece alone; each note is articulated with crystal clarity, and he even takes on an optimistic tempo which I rather enjoyed. This is also used in Der Erlknig. No performance with Paganini’s music should be without the Caprices, and the famous No.24 is rendered here again in true virtuostic fashion.

I particularly enjoyed the only slow piece on this disc, Tchaikovsky’s Melody in E-flat from Souvenir d’un lieu cher, where Repin shows us how every phrase could be thought through with certain liberties thrown in. Repin seems to be very at home with the violin which was lent to him for this recording, clearly displaying his effortless tone production in Ponce’s Estrelita.

Two of my personal virtuostic favorites have always been Bazzini’s La Ronde des lutins and Sarasate’s Zapateado, where the flying harmonics, octaves and syncopated rhythms are just amazing to watch and a joy to listen to.

Markovich is an able accompanist, supporting the violinist firmly yet unobtrusively. The notes point out that for Repin the most difficult piece on this disc was the Ernst’s Grand Caprice on Schubert’s Der Erlknig, a work he describes to be the most technically challenging piece ever composed for the violin.

This disc is pure violin.