Below: “Reliefs at Dawn” by C.R.W. Nevinson. (Trustees of the Imperial War Museum). 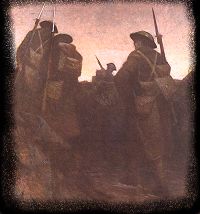 There is no doubt that the War affected Bliss in a profound and personal way. His brother Kennard was one of the victims – one of the millions of the faceless whom Bliss remembered with all too vivid clarity (“poet, painter and musician, he was the most gifted of us all”). Bliss’ own musical career was cut short as he was drafted into the military and forced to make death instead of beauty. When the war ended he was closer to thirty than twenty and a first hand witness to horrors of the trenches. In 1928, ten years after the war ended, Bliss was struggling with trauma and nightmares. He returned to the battlefield to seek out the grave of his brother, whom he was still mourning. Morning Heroes was his catharsis.

Ever since Beethoven revised the dedication to the “Eroica Symphony”, the nature of heroism has been at best, ambiguous. Heroism cannot be defined without a political context. And victors always write history. Does one define as hero the owner of the German hand that struggles to touch a butterfly in “All Quiet on the Western Front”? What can one say about the freed POWs of the Indian National Army who fought alongside the Japanese in WWII to liberate their country from oppression and servitude? The nature of heroism is what Morning Heroes deals with. While there is no doubt whose side Bliss’ sympathies lay, he managed to produce a work of startling universality – a testament not only those who leave home to face death, whatever the colour of their skin, but also to those that are left behind. For example the very first movement is a tender family scene between Hector and Andromache reminding us that the presumed “evil ones” were human too with families to mourn them.

The usual structure of this work allows Bliss great independence in treatment of these big ideas. Added to it is his unique musical idiom as the unlikely musical child of Stravinsky and Elgar. In the final reckoning the work is a setting for oration and poetry. Bliss’ wonderful humanism led him to choose passages from as diverse sources as Homer, Walt Whitman and Li Tai Po.

The first movement is an oration from the Illiad, a scene that starts with the tender pleas of Andromache to prevent Hector from joining the battle and ends with masculine bombast of bloodlust and visions of glory. The second scene is a setting of “The City Arming” by Walt Whitman describing the spirit of New York at the outbreak of American Civil War in 1861. This scene is intended to recall the spirit of devotion and self sacrifice of the “lost generation” that volunteered for service in 1914. However, unintentionally or perhaps intentionally, it also serves to