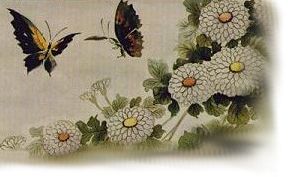 This violin concerto is a very special one. Few listeners outside Asia would have heard it and, as a purveyor of good music, I feel it a duty to introduce readers to the most successful of all Chinese violin concertos.

In its universal appeal we cannot disagree that music, whether Chinese or Western, (plus African, Indian and traditional musics all the globe round) is essentially a kind of communication. However, the context of the moods and emotions described and communicated may sometimes be culturally biased; because it is so different from our usual lifestyle, we fail to gain any insight into the music.

Although I am Chinese, I cannot pretend that I can feel the intended nuances entirely. However, I am confident that my attempt will be accurate if not comprehensive. This music – the “Butterfly Lovers” Violin Concerto has its genesis in a Chinese folk legend “Liang Shan Bo Yu Zhu Ying Tai”. Literally translated, that means simply: Liang Shanbo and Zhu Yingtai. These are the names of the two characters (male and female, respectively) of folk legend.

The story goes like this. Zhu Yingtai is a chinese lady. In order that she may travel to Hang Zhou, a southern province of China to study, she impersonates and take on a male identity. There she meets Liang Shanbo (bonafide male). In the course of their studies, they become extremely close friends. In the Confucian context, the notion of ‘Jun Zi’, or ‘gentleman’ is a well-exemplified ideal in Chinese history and further, its quality and characteristics are well-expounded upon by scholars in Confucian studies. Basically – this implies the highest integrity, morals and demeanor, coupled with well-refined abilities and skill both in martial arts and scholarship. It is this kind of relationship that has developed between the two. When the time comes for Yingtai to return home, the pair hesitate greatly in departure, entreating each other with much ceremony and suppressed sadness. Yingtai offers ‘his’ younger sister’s hand in marriage and entreats Shanbo to visit ‘his’ residence soon to raise the issue of marriage with ‘his’ parents. Shanbo is unaware that Yingtai does not have a younger sister and is in fact offering her own hand in marriage.

A year passes before Shanbo makes his way to the Zhu Residence. Liang Shanbo is overjoyed to realise Yingtai’s true identity and that she is in love with him. However, happiness turns into sorrow as the two soon discover that Yingtai has been betrothed to another gentleman. In great sadness, the two lovers meet at the tower and lament their great misfortune. Upon his return to Hang Zhou, Shanbo falls ill in his great misery and dies. Yingtai hears of this on her marriage day and flees to his grave. There, folklore has it that her crying so moved the heavens that the clouds themselves shed tears at her grief. Further, the earth beneath her cracked apart, and the ill-fated Yingtai commits suicide by jumping into the opened grave. Miraculously, the pair are transformed into butterflies. Arising into the air, they flutter and dance side by side among the flowers, never to be separated again. 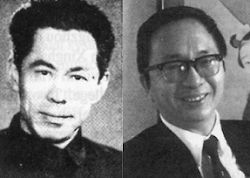 The Butterfly Lovers Concerto was composed in the year 1958 by Chen Gang and He Zhanhao (right), who were then studying at the Shanghai Conservatory of Music. The pair were exploring the feasibility of setting Chinese music in a (Western) symphonic medium, incorporating borrowed devices from chinese folk theatrical music as well as vocal techniques of Zhe Jiang’s Yu Theatre. The end result is a free-form concerto for the violin in one movement. Applying closely the storyline that I have described, the concerto may be divided into three sections as follows.Part I describes Shanbo and Yingtai’s meeting (Liang is represented on the cello and Zhu on the violin), their joining hands in brotherhood, the blossoming of love; their study and play and their sad separation when Zhu returns home.Part II portrays their resistance to the arranged marriage. Their meeting at the tower and the eventual death and suicide of the lovers. The violin’s free rhapsodic play involving many syncopated chords (Zhu and her resistance to marriage) is pitted against the orchestra (Zhu’s father forcing the marriage) in a dramatic play. The meeting at the tower is exemplified by the interplay between the cello solo (Liang) and the violin solo (Zhu). The following section employs borrowed theatrical devices to bring across the sickness and death of Liang and further the dramatic suicide of Zhu (Chinese gong and reprise) Interested listeners can hear these devices to great effect if one imagines them as sung, as it were, from the violin.Part III wraps up the saga as the flute and harps signify the mysteriousness of the imminent metamorphosis. The play of the butterflies is heard following a recapitulation of the love theme and their happiness is echoed by mortals.

The many subtle nuances that you might hear are characteristic of Chinese music, both instrumental and vocal. Western interpreters will be at a loss for these musical inflections cannot be successfully indicated in the score. [From my experience in the Chinese Orchestra, this is quite similar to Baroque ornamentation – Ed.] Further, the execution of these tiny flexi-tones or micro-tones – as some would call it, are culturally decided. Only when one grows up exposed to this music (as a genre) will one be able to inflect the correct emphasis on the correct notes in this music. Further, the sharp listerner might recognise the use of binary treatment of most phrases – these consecutive repetitions are an entity common in Chinese music reflecting the Chinese belief of “Chen Shuang Chen Dui”, the auspiciousness of ‘pairs’.Left: Painting by Yune Son Dao Zen.When all this academic points are put aside, the music is, to say the least, stunning. The compass of emotions that the orchestra must deliver may not be as deep as Beethoven. Neither is the concerto reminiscent of the flowery Vieuxtemps. But in its own way, the underlying subtleties are, despite the smallness of scale, immense, very intense and excitingly difficult to achieve. To ignore this violin masterpiece is to ignore an unmistakable driving force in music development, and further a growing Chinese presence in the world of “Classical Music” today.