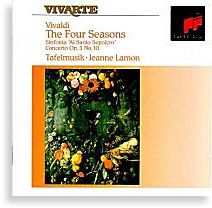 Includes sonnets in Italian, with English, German and French translations.

Tafelmusik begins Spring I with a bright and chirpy introduction, with beautifully murmuring brooks. In Spring II, the goatherd sleeps sweetly while an archlute is added to the continuo of the Pastoral dance. In fact, in this Four Seasons, the harpsichordist seems to prefer to be on the prudish side, giving centrestage to the archlute. I found this general scheme to be very appropriate and appealing, as explained below.

Summer starts soft and gentle, again with the archlute commenting in calm intervals, soothing in-between the storms of soloist and director Jeanne Lamon. Listen for the realistic sound of flies buzzing around, almost lazily. In Summer II, I found a feeling of uneasy calm enveloping the music. The concerto finally ends with a moderate storm compared to the first one of Summer – the intensity of the musical weather created by Lamon surpasses that of the orchestra – her running notes are very clear.

In Autumn, I was constantly drawn to the sound of the archlute decorating the parts of the bowed strings. It was very appropriate to include in Autumn II a part for archlute for its intimate voice – this is a very quiet movement which few orchestras take advantage of. “The Hunt” is very lively and cheerful, with sparkling clarity of the individual instruments. 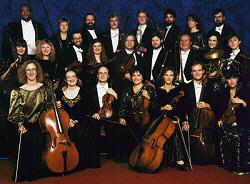 The strumming of the archlutenist brightens the winter. By giving precedence to the archlute over the harpsichord, Tafelmusik conjures up a different image of winter. While Vivaldi penned a harsh, cold Winter with its chattering teeth, the first movement here gave me the impression of a warm, cosy winter, with white snowflakes falling softly outside the window. The embellishments of the solo violin’s line in the beautiful “Winter Largo” is achieved with fluid grace, while in the background, the archlute accompanies the pizzicato strings. Although the last movement is a bit harsh, I found it still had tinges of warmth.

Overall, Tafelmusik (above left – Lamon is in front row, 4th from left) plays with excellent skill. In addition, their lightness of style is very appealing, as compared to other period instrument versions. I highly recommend this recording to anyone who wants a Four Seasons performed on period instruments, in period style.

This disc is available at, or can be ordered from, Tower (Pacific Plaza), HMV (The Heeren) or Sing Music (Raffles City).

René Chia is the proud “mommy” of a little teddy bear with delusions of grandeur. His name is “Emanuel”, after CPE Bach. If she had her way, he would have been named “Wilhelm” as she can’t be bothered much about CPE.