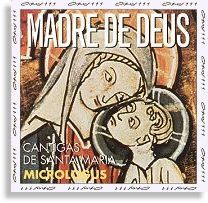 from the collection of Alfonso X “El Sabio

Happily, this selection from the 400+ Cantigas di Santa Maria contain pieces not included in other collections I’ve reviewed. About half of the programme consists of instrumentals, interspersed among the vocal works. In any case, of course, the instrumentals are based on, or arrangements of the songs. The Italian group Micrologus, from Assisi, founded in 1984, prove themselves worthy exponents of this music, infusing the Iberian music with an Italianate lyricism and energy not at all alien to their culture.

Left: King Alfonso X, “El Sabio” (“The Wise”), in the activities dearest to him: study, meditation and the collection and transmission of art. Detail from a miniature from El Escorial codex.

If you find this music “alien”, it might because while thinking of it as “European” music, most of us forget that the style, the instruments and the music-writing is in large part borrowed from the Arabic cultures. Hence, in the opening instrumental on A Madre de que livrou (CSM 4), featuring transverse flute, viela, strumming harp, a chitarra moresca (“Moorish guitar”) provides evocative accompaniment. This is truly a very beautiful piece, evoking images of a sunset scene in some Medieval village or town, setting the mood for the album perfectly.

Below right: The King kneels before St. Gabriel and the Virgin
while his subjects look on in admiration.
From Ms. B.R.20 of Florence, fol 120v. 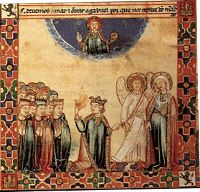 Immediately after, we are brought into the fray of my favourite “style” among the cantigas and their performance – the fast songs, propelled by rollicking instrumental accompaniment. Such is Qual a santivigada (CSM 330), which begins with a lively little processional tune on flute with a tamburo thumping in support. Soon the chitarra latina joins in, and unexpectedly (because the phrase doesn’t seem to be complete), the solo voice of Alessandro Quarta joins in followed by the “choir”. Qual a santivigada (“Who was a saint…?”) is a joyous celebration of the Madre de Deus – Mother of God – who was “a saint before and after her birth”. Once again I must point out how un-churchly and yet how completely sincere these celebrations of the Virgin are. The effect really must have been rather like how we view pop music nowadays – fast-paced, richly coloured with full-hearted informal (more or less) singing.

Cantiga 422, is the title song of the album (though the name “Mother of God” appears everywhere) – a beautiful piece which “tells how the Blessed Virgin Mary will pray Her Son for us on the Day of Judgement”. Solemn but hopeful in tone, the lead singer (Patrizia Bovi, singing at mezzo range) beseeches the Virgin to temper the wrath of Heaven and Christ on that Day. For example,

“When the fire burns the mountains, vales and hills,
tell how in Egypt you found no water springs.
Mother of God, pray your Son for us on that day.

In this way, the role of the Virgin as protecting mother, saviour of the distressed, temper of divine (and perhaps even masculinist) wrath is portrayed. 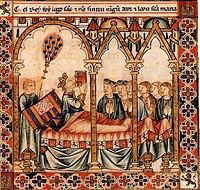 The Virgin is also a symbol of a divine love(r) often cast by troubadours in love songs. That is, she is like a lover, one who is worshipped as the most beautiful, most divine and while the pining troubadour can receive her love in return, she is because of her divinity unattainable. Such is the idea in the famous “Rose of all roses” of Cantiga 10, Rosa das rosas, where a male voice sings melancholically to the “Rose of all roses and flower of all flowers, /greatest of ladies, liege lady most high”. Similarly, but more joyfully in Santa Maria, valed’, ai, Sennor! (CSM 279), the Virgin heals the sick troubadour, in this case King Alfonso himself.

Above/left: The recovered King, a book of Cantigas in hand, thanks the Virgin.
From Ms. B.R.20 of Florence, fol. 119v.

More formal and church-like in manner is Cantiga 421 Nenbre-sse-te, Madre where two male voices likewise pray to the Virgin on the same subject. The atmosphere of prayer continues with the famous Quen ba dona querr, CSM 160. Similar to other accounts, it is led by one singer with a choral refrain. The performance here is less lyrical in tone than in the Dufay Collective’s “Miracles” album, but much darker through Patrizia Bozi’s voice. She also recounts calmly in song, the seven sorrows of the Virgin in the 8-minute Aver non poderia (“There would not be /tears to shed”, CSM 403), accompanied by a hurdy-gurdy.

To be honest, I found that listening to the streches of singing in this album a little tiring, as the tone does not vary as much as in other albums. For that, I am grateful for the instrumental interludes. For example, there are the processional dances based on Ben vennas, Mayo (CSM 406) and Muito nos faz gran meree (CSM 378), both dances of great colour. The blare and buzzing of the horn-like cornamusa (mezued) is rarely heard, at least to this reviewer. Wind instruments such as the buccine (shawms?) take the main melody while a percussion accompaniment (darabukka [hand-drum]) and the tambourine of the riqq) follow the procession. The result, if serious (in the informal, liberal way the Cantigas are) in tone, still makes one want to get up and dance. 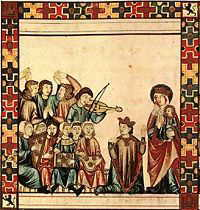 Similar to the opening piece on the album is the catchy Ontre toda-las vertudes (CSM 323), with flute and rebec taking turns dancing with the oud (lute) and arpa (harp) while the darabukka and riqq support with their liberating drumming and soft chinkling. Excellent and convincing performances by Micrologus.

Right: The King kneels before the Virgin and presents to Her the musicians and dancers who perform the Cantigas.
From Ms. TI1 de El Escorial, fol. 170v.

The centre of the album is filled with the most serious pieces. At the onset of the dance of Cantiga 328, Sabor Santa Maria, the mood of the joyous Qual a santivigada, as flute and drums lead the chitarra latina in a merry processional, joined later by the castanets. Things get bigger again (the central pieces featuring smaller ensembles) as we encounter first the instrumental conjoining of three cantigas. Immediately after we enter the finale.

To the rattling of castanets, Patrizia Bovi announces proudly that “[t]his cantiga of praise tells how the Blessed Virgin Mary caused rocks to bear her likeness”, one of the numerous wonders attributed to her as related by pilgrims and crusaders on their return from the Holy Land. With prophetic confidence and simple joy, Micrologus sing out:

Let the image of the Virgin
be forever present in our hearts,
that image which was impressed
even on the coldest stone.

…Or in this case a piece of plastic. But truly, even if you are not religious/Christian (I am neither), this music rarely fails to make a solid impression. It is not the Christian dimension of the Cantigas di Santa Maria that appeals to me, but the power of the story-telling, the universal goodness, the miracles and compassion of the Virgin; and the sincerity of the King who believed wholeheartedly in capturing it all in art.